By Danielle Fraser - Winner of The Edge radio Silverchair competition 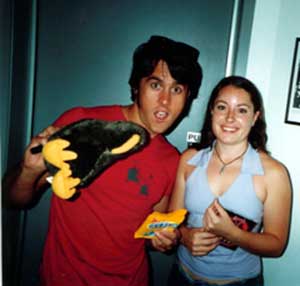 I was one of the luckiest girls in the world after winning a review competition held by The Edge radio station, to go meet Silverchair in person at the hotel they were staying at during their visit to NZ. It was an inspiring and pleasurable time to meet Silverchair, also to write a review of their live performance at the Big Day Out in New Zealand.

I arrived at the BDO waiting for Silverchair to maximize the crowd with induced content... (this is Silverchairs first live performance since since 1999 so I was feeling rather nervous for them).

As the overcast weather spread over the daring crowd, a spectacular intro from Daniel John's electric guitar was performed. As this was done, the crowd accumulated to the blue stage with excitable commotion to hear Silverchair roar. "Paint Pastel Princess" was Silverchairs next performance then the enormous hit 'Israel's Son' with pumping bass that was descending into the depths of the Ericcson stadium grounds.

As 'Miss You Love', 'Ana's Song' and 'Emotion Sickness' followed, I couldn't help but notice how inspiring the lyrics and catchy motifs were to these 3 songs, Daniel Johns sultry tone amazingly matched the voice of Kurt Cobain's, former rock legend from Nirvana, when 3 new songs of Silverchairs were performed. 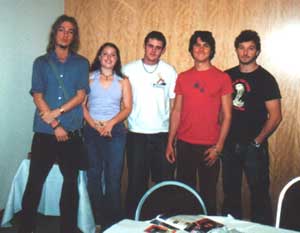 As an all round pleasant musical beat progressed, I knew it had to be Silverchairs latest song 'The Greatest View'. This song is a lot more serene and respectable than their previous songs, so the crowd did not know how to respond. It seems that an impressive amount of thought has gone into making this song, which is inspiring yet explosive! Most of the crowd were expecting a loud, grungy, sinister tone, so the movement was quite still, a lot of people were amazed that Silverchair played a masterpiece that was not mosh material, but we all were impressed by their different approach.

With drenching rain pouring amongst the crowd, 'Anthem for the Year 200' ignited the keen crowd, mosh pits arose and the ground thumped as the people of NZ went completely wild to Silverchairs explicit expedition. The grand finale of Silverchairs peak performance was about to resume with 'Freak', the crowd became amplified and chanting roared the stadium.

Silverchair were one of the few that had spectacular lighting on the day, pity it was not completely dark though! 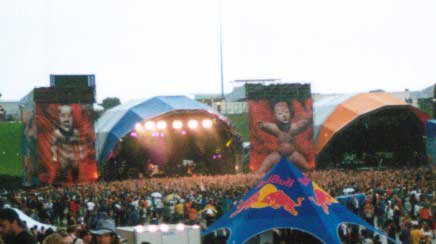 As Daniel Johns ended with an ascending note on his guitar composed a speech thanking Auckland for being in the rain with them. The crowd were pleased they made the journey to NZ's Big Day Out. Through Silverchairs performance, all 3 members of the band made an all-round contrasting sound. Daniels extrovert voice complimented their music, accompanied by Daniels dramatic and skillful guitar playing, Bens perfect rhythm on the drums and Chris's precise bass playing, their mothers would be proud.

Silverchairs 4th album 'Diorama' which features 'The Greatest View' is said to be their most ambitious work to date and an interesting listening experience, so I defiantly recommend their new album, an unforgettable journey in music not to be missed!!!


Silverchair Review for the Big Day Out (by Natalie from Christchurch)

Extremely excited and waiting in anticipation, I was caught in that moment. The moment when Daniel, Chris and Ben menacingly walked up towards the Blue stage - to us - the crowd - the cyclone rotating about an area of high atmospheric pressure. The crowd went wild. First song - madman... it ripped across the crowd like a tital wave... you can feel the pressure, nervousness and excitement. Daniel looked calm but yet there was an element of rage. Inhaling this atmosphere of Silverchair was like an adrenalin rush. Ben was hammering on the drums and Chris was a beast on the bass. Miss you Love was there to tear your heart out.

But as Daniel Johns calls it - "it's the kiss and make out song ". Regardless of the rain that kept refrained we were the ones in the end that gained. To end was the old time freak song: with that song you can never go wrong. Finally they left us with a legacy that once again even though we were in the rain, I will never forget this day again.

Dazzling, outstanding and mesmorising - the rest was history.

This was something I had waitied a very long time for. Since I had first read that Silverchair were coming to Auckland, since I had first rushed to buy my ticket, (about 2 or 3 months ago), and since we had arrived at the stadium. They were on earlier than expected which was just fine with me!!!!!!!!!.

Daniel and Ben strolled on to the stage as if nothing was going on, and Ben hoped up behind his drums, and they ripped into Madman. I had a great view of the band, and the crowd started to appreciate what was going on!!!!!!! One thing surprised me though, Daniels facial expressions still seemed like nothing was going on!!!! He played his gutiar in such a relaxed manner.

Chris on bass was just awesome!!!, letting his body move up and down with the music. The beginning of Israel's Son, I gotta love that!!!! and Ben on drums was consistently solid, powerful and fast as ever. Miss U Love was awesome and Daniel's ability to sing from his heart and soul, and Freak had the crowd singing nearly every word.

No Association, what a live song that has always been, and The Door!!!!!...... Daniel showed the crowd Sam's awesome abilities on keyboard/organ. Greatest View.. a track which NZ has heard many a time over the last few weeks... the crowd was ready for it, and enjoyed it right through.

So, I was always going to enjoy Silverchair and I would be back to see Silverchair live tomorrow if possible, and I think the crowd were stunned by Silverchairs ability to lift the crowd so quickly and with such ease!!!!!