RA: Welcome to New Jersey and I'm sorry it's cold outside.

RA: Just a bit, yeah. You walked right into freezing temperatures and snow. 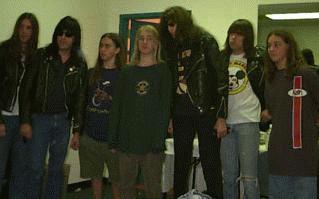 RA: I would imagine the weather in Australia's got to be beautiful this time of year, though.

RA: That's gotta stink. It's summer in Australia, it's winter in America.

RA: (laughs) I would imagine that's gotta be the hard part though, trying to free up a schedule at this point to go out on the road and tour with silverchair 'cause everybody in the band's, what, 15, 16 years old right now?

RA: You guys are what, sophomores or juniors in high school at this point?

RA: (laughs) In America, that would be, like second year or third year of high school.

RA: That's got to be tough because you're like trying to be students in the 11th grade and trying to be on the road. How do you determine when to tour and when not to tour, is it based on the schedule that you have at home, knowing, OK, we gotta be in school here, we got time off here, maybe we can go over and tour now.

RA: How tough has that been so far, trying to juggle all that, being that the record has done amazingly well out of the gate here in America?

CJ: We do a lot of catch-up work when we get back and have tutors when we back.

RA: Is that a little difficult, being removed from your friends and the normal everyday routine that you used to have?

CJ: Yeah, it's good to get back and muck around with your mates and stuff like that.

RA: The tune I just played, Tomorrow, a lot of people may not realize this, but that song is over two years old now. Was that one of the first songs you guys wrote as a band?

RA: Wow. So at that point, you're 13-14 years old, I guess, clowning around, putting music together, and figuring, this may work. Did you ever imagine at this point that you would be at this level this quick?

CJ: We never really set out to get a record contract or anything like that. We just sort of played in the garage and stuff like that and just mucked around after school.

RA: What would you say is the difference between when you first started and the band as it's standing now, do you feel that maybe the band is changing a little bit?

CJ: Music-wise, it's getting a bit heavier, heavier riffs and stuff.

RA: I heard one of the bands mentioned that you were into is Tool and they're really cool and very aggressive.

RA: Listening to outside music, does that influence you guys a little bit?

CJ: Yeah, sure. Lots. Listening to overseas bands, stuff like that.

RA: What are you guys listening to right now as you're touring around the country?

RA: Helmet's coming into the venue you're playing, you're gonna miss 'em by a couple of days...

RA: I can imagine, so you guys were last night in New York City?

RA: Oh, Washington, D.C., yeah. Chris is on the phone with me from silverchair. Chris, I'm gonna do your latest tune and we're gonna come back, this is Pure Massacre.

RA: Chris, I'll tell you something, if this show wasn't all ages, you'd have a lot of young ladies who would not be happy.

RA: Why? I'll tell you something, the appeal that you have, it's been amazing, it's been young and old, but it seems like the young teen females are going crazy for you at this point.

RA: I think so, I think you'll be pleasantly surprised tonight. Take a close look at the audience, you may be surprised. Not a bad thing though, come on man, unless you got a girl friend at home you're trying to be faithful to.

RA: You do have one?

RA: Uh-oh, that explains it. Now we mentioned before, being out on the road, the whole family unit thing, has it gotten a little hairy after a while, has it come to a point where you have those rough days where you wanna be by yourself, maybe?

CJ: Not really. We all get on pretty well and stuff like that. I know the guys pretty well.

RA: How long have you known each other, Daniel, Ben and yourself?

RA: So that's not a bad thing, at least this way there's a definite bond and a friendship that is first and then the band came later on. That's important.

RA: Especially when you're life gets turned upside down and you wind up on the road, it's gotta be a cool thing to know you can lean on each other if things were to get a little tough...

RA: Definitely doesn't sound like things are going very badly. Let me ask you this, when the cancellation of the Red Hot Chili Peppers tour was gonna happen, you guys were slated to be the middle band on that three-band tour, when that went down, did you think about just going home? How did this tour really come about?

CJ: We hadn't really left yet and I was at home, ready to leave, about half an hour before we left we had a phone call saying it had been canceled. So we just took 10 days off and the manager organized a heap of dates and we left 10 days later.

RA: So when does this leg of the tour end?

RA: Then it's home for the holidays, I would imagine?

RA: When would be the next time you guys would come out?

CJ: February, with the Chili Peppers.

RA: That's fantastic. We just announced the dates in February in New York City, so look for silverchair to be on that bill. This track I'm about to fire up appears on the motion picture soundtrack to Mall Rats, done by a local film maker here in New Jersey named Kevin Smith. Did you guys know about the film, was it just something that maybe they approached your manager and said...

RA: This is one of those tracks that didn't make the full-length album.

CJ: Yeah, we just sorta ditched it. We really didn't like it that much.

RA: You really didn't like it? That's surprising to me because I've got the CD-4 and for people who are becoming fans of silverchair, if you find this as an import, I think it's worth checking out. It's a lot of good cuts on this four-song, aside from Tomorrow. We're gonna play two of the cuts from it, one of course from the Mall Rats soundtrack and the other one we're gonna talk about you just added into your set so it's appropriate that we will talk about it, but the track Stoned, it's kind of surprising that you guys didn't feel that strongly about it...

CJ: We thought it was a weak song so we just sorta left it in the back.

RA: When you were putting together the CD, how many tracks did you have done?

RA: So it really wasn't that difficult to decide, it was just a matter of one or two that we pushed off to the side.

RA: And as far as new songs, are you guys working on new material as you tour along? How does the process of writing go for silverchair?

CJ: Whatever ever comes out when you're playing, in the garage and stuff like that.

RA: So there's really no rhyme or reason, it just happens?

RA: Well, this is one of those songs that just happened, the track is Stoned.

RA: Chris is still on the phone with me getting ready for the show tonight. Again, this length of the American tour is wrapping up on the eighteenth and they're gonna come back with the Red Hot Chili Peppers in February, so by some chance you miss them tonight, then you can catch them in New York City. I think the show that you are doing in New York is Madison Square Garden.

silverchair with the Ramones RA: That's gotta be awe-inspiring 'cause that's gonna be like, oh, about 20,000 people in front of you. What is the biggest crowd you've played to so far?

CJ: Did you guys know about the Ramones before you did the show? They're a lot of fun to be around.

RA: Most of the people you're surrounded by gotta be at least ten years older than you. Here you are, you're out on the road, having fun, and it's almost like you have to be in a sense a grown-up, or grow up quicker than maybe you would have to under normal conditions.

CJ: To have a decent conversation, yeah.

RA: Does that freak you guys out at all or you've grown to become comfortable with it?

CJ: Yeah, sort of just get used to it.

RA: Being thrusted into the limelight is not exactly something anybody would be ready for, but it sounds like you guys are handling it really well.

RA: There's another side of silverchair a lot of people may not know about. I had heard rumours that, playing little pranks on their road crew and it turns out, Chris, this is true, isn't it?

CJ: Little things, just to break the boredom. Shaving cream and everything, on the hotel door, then when they walk out, it's a bit of a mess.

RA: (laughs) I think it shows both sides of the band, that we're gonna handle this very adult-like but hey, we're still who we are and we're gonna have fun.

RA: Well, it sounds like you're having a lot of fun, so welcome to America, hopefully things continue to go really well for you guys.

RA: Above everything else, this is the first CD I think of many from this band, and I'll be really interested to see what happens with the next record. Like you were saying, you guys are becoming a little more aggressive so we'll see what the sound happens when you do the next record.

RA: In the meantime, I'm gonna wrap it up with this track from the Australian CD-4 and I think it's appropriate because you've just told me you've added this track back into your set so you're gonna be playing this tonight as a matter of fact.

RA: So this is one of those songs that didn't exactly make the record, I think it's really cool and it's something you can pull out during an interview, so that's why were doing it.

RA: And one other thing, is Smile the opener tonight, correct?

RA: And, uh, they are, they are a great band and definitely worth checking out so get there early. Chris, do you have any idea what time you're going on tonight?

RA: OK, well, let's just leave it at that and say get there early, check out Smile and then check out silverch...

RA: Well, everybody just come on out and have a good time tonight, that's what it's all about.

RA: Chris, look forward to meeting you tonight, thanks for taking the time out on the phone.

RA: All right, and this is Acid Rain.