IF WE COMMENCE this tirade with the humble acknowledgement that old ladies have no business writing about pop music, can I ask readers to cut this slightly disgruntled columnist some slack? I did sit through the entire ARIAs on my own because nobody in the house could stick it out. 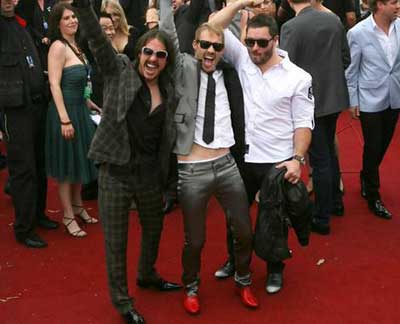 First, not an original observation but an important one: musicians should never speak on television. Even less than actors, even less than Ben Cousins.

If we ever needed final proof of the singers-shouldn't-speak rule, look no further than Tarisai Vushe on Australian Idol. But we had to because immediately after that pint-sized pouting pussy cat's dummy spit came hours of home-grown musicians gormlessly mumbling gratitude or pretentiously pontificating their politics.

Doesn't John Butler know there is an election on and we've had a gutful of self-aggrandisement disguised as social conscience? If only he had just shut up, jammed with Keith Urban and said thanks for his pointy object without lecturing us, he'd have walked away with dignity. But no, we endured a sorry combination of Al Gore and Bono in a tea-cosy. Now I expect him to have lunch with Sting.

Without wanting to be a total curmudgeon, I reckon there is plenty of pleasant independent and varied talent in the country just now and, when it is played instead of spoken, we enjoy a pretty good cross-section.

I know that those horrible school children singing about ping pong are not trying to sell me a record. I know that because, during the previous Idol episode, I was shocked and disappointed that nobody chose Go-Betweens or Triffids songs. The younger generation has earned the right to murder or manipulate Powderfinger anthems. I get it and yet …

As an Australian Idol devotee and a believer that this year's batch are a lot of very good eggs, there was something telling about the abrupt juxtaposition of Idol and the ARIAs on Sunday night. It had been a pretty good episode, with a growing level of professionalism displayed by kids who really should get work singing something. And the judges were giving them very sensible advice about moulding and spinning the kind of artists they are going to become if they want successful careers.

It all made sense and Matt Corby may well be a shiny exception to the sensible, average, manufactured Australian Idol product to date. But the artificiality of the process became blindingly clear in the opening moments of the ARIAs, with the first song.

There, live on stage for all to see, was that undisputed freak of nature, a physically beautiful, impossibly charismatic, unfeasibly talented Daniel Johns, with that small but brilliant band Silverchair, pounding out as good a rock song as Kurt Cobain ever constructed. And then there are all the rest.

Perhaps once in every generation, in any continent, that sort of talent bubbles to the surface. And it can't be formed or farmed on a talent show. You could tie Daniel Johns up in a plastic bag, under a rancid pond, in Iraq, and he would still be more musical than anybody who has ever graced an Idol stage.

The magnitude of that observation only solidified as the night grew longer and only one other fully fledged musical freak of nature graced the stage. Bad boy Nicky Cave is showing signs of well-earned wear and tear but in his only slightly contentious induction into the ARIA Hall of Fame, the volume of work and the freshness of the material 30 - gulp - years later is remarkable.

And if Nick Cave was a teenager today he wouldn't audition for Idol and they wouldn't have him.

Cut to Idol on Monday night, as Dicko tried to convince an ambivalent Matt Corby, who had felt a fraud at the ARIAs, that the new breed of stars could come from anywhere: bedrooms, backyards and TV contests. Our TV contest has really only produced acts suitable for carols nights and the long lost Midday show, yet the process is utterly compelling and entertaining. And as we fondly waved farewell to Tarisai, the Groucho Marxesque question remains: can we really ever worship any Idol we are stupid enough to create and vote for ourselves?