silverchair played a "secret" show at the University of Sydney Refectory in conjunction with the Australian premiere of the Spawn movie, for which the band contributed a song to the soundtrack. 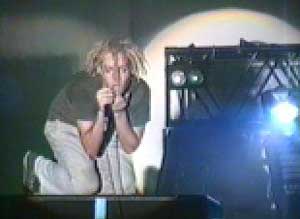 Opening the show was Paul Mac, who did the remix of Freak which was featured as a B-side on silverchair's Abuse Me single.

The gig was secret inasmuch as competition winners who attended a special screening of the film in inner city Sydney did not know where the show would take place until they were taken to the university by bus. In addition to the lucky winners, the select crowd included people from the music industry and members of the media.

The usual set list was adjusted for the special show, which was not actually part of the Summer Freak Shows '97 tour. The show began with Freak instead of Slave and to the delight of many in the audience, the band played Pop Song For Us Rejects and Nobody Came.

silverchair's Daniel Johns frequently exhorted the crowd to make some noise. The contest winners, who gathered in front of the stage to form a mosh pit, were trying their best to make up for a noticeable lack of response from those in the back of the hall.

"You're allowed to scream, this is rock," Johns said. "This is not a university arts display. Keep screaming and have sex on the dance floor, do what you want. So wake the fuck up and rock the house. Not to this song, though, just wait a few songs. Fuck, I chose the wrong place to say that. Sorry." Cemetery and Pop Song followed, then the crowd in front complied with Johns' wishes halfway through Suicidal Dream and during songs such as The Door and Israel's Son. 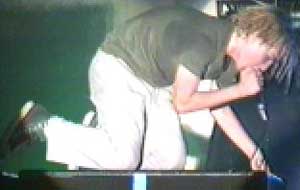 The show closed with the Freak remix, and the band was joined on stage by Paul Mac, who twirled turntables as drummer Ben Gillies pounded out the beat on tom toms and electronic drums. Bassist Chris Joannou laid down a solid groove and Johns gave the same type of full-out performance on the song as he had done during the Freak Shows. He growled and screamed his way through the lyrics, and climbed a set of speakers stacked tenuously at the side of the stage.

"Body and soul, I'm a freak, I am freak," he moaned as saliva drooled from his mouth. Johns shook spastically to the booming drum beat, and jumped back onto the stage floor to finish the song.

After the band and Paul Mac left the stage, a small but vocal group of fans chanted "we won't go" but go they soon did, as the house lights came up, and the secret show had come to an end.

Abuse Me
Slave (without long pauses in intro)

Daniel: "Thanks. Well, fuck, you're loud! Hey, big scream! All right. Holy fuck, sorta like Nana's house in Stroud. Should get out and sing Waltzing Matilda. You're allowed to scream, this is rock. This is not a university arts display. Keep screaming and have sex on the dance floor, do what you want. So wake the fuck up and rock the house. Not to this song, though, just wait a few songs. Fuck, I chose the wrong place to say that. Sorry." 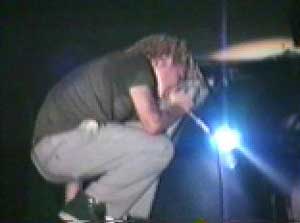 Daniel: "Thanks, Gouldie. [Stage crew member Paul Gould had just changed the microphone.] He's got a new job now, official mike changer. What the fuck do you keep saying Lindsay for? Lindsay! Lindsay! What? Everyone's so angry. They're standing there, uh, aw, fuck. Fuck you. Not fuck you 'fuck you,' but you're saying fuck you to us. That's how we read it. Wake the fuck -- no, wait, next song. All right, you ready?"

Daniel: "WAKE THE FUCK UP!"

The Door
No Association

Daniel: "All right, stage dive if you want. We're not legally responsible if you injure yourself. Oh man, this is so weird! Fuck, it's quiet. Sssh, sssh, sssh, be quiet for a second. [whispering] Ben, Ben, whaddya doin'? How ya goin', mate? [yelling] Shut up, we're whispering! SHUT THE FUCK UP! [whispering again] Dickhead, what's happening man? Cool man. [normal voice again] All right. Any of you seen the movie Spawn? 'Cause this is off the Spawn soundtrack. It's about animal liberation. So if you wanna fuck animals, go and fuck an animal, but it's fucked." 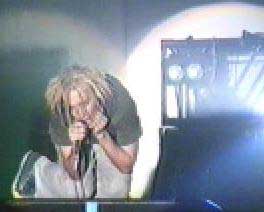 Spawn is the latest comic book hero to make the leap from the page to the big screen. The soundtrack features some unusual contemporary collaborations, and one of the featured bands played after the premiere in Sydney on Monday, December 8th. Most of the audience were winners of competitions to attend the screening, the real prize being the opportunity to catch the Spawn Shuttle to the invite only silverchair performance after the screening.

While opinion was divided on the film itself, even the diehard detractors had to admit that silverchair were an amazing live force. The band took to the stage at the Sydney University Refectory and opened with a blistering rendition of Freak, with the bar heater lighting props from the video adding to the effect.

Drummer Ben Gillies has lost any trace of his former elfin self, with his new Taxi Driver style mohawk and the kind of physique that comes with playing as hard and heavy as he has over the last year. Their touring schedule has done more than increase Ben's biceps. While they've always been impressive live, silverchair were accomplished beyond all expectation.

silverchair challenged both themselves and the audience with their closing song, where DJ Paul Mac joined them for a live rendition of the Freak remix. Ben came out from behind the kit to play toms, Daniel climbed the speaker stack to deliver the lyrics with much anguish. The whole set was notable for Daniel's angst, this was not a lighthearted young man. The R-rated banter between songs mainly consisted of Daniel telling the audience in no uncertain terms that he didn't much care for them. In case there was any doubt, he often gave the finger mid song to both the audience as a whole and selected members.

Hopefully the anger was amplified for performance purposes. It would be a shame to see such a talent have to retire early with an ulcer.

The show also achieved the near impossible and the sound in the cavernous hall was excellent, if extremely loud. Add the top notch light show and professionalism and power of the band, and the Spawn audience were winners and grinners indeed.

The secret gig was held at Sydney Uni following the preview of Spawn, the soudtrack for which features silverchair, of course.

The Refectory was filled with people who had won passes and others from the industry waiting to see the 'chair's last Sydney gig before their long break next year.

They came on stage with their usual sound effects and started off the night with Freak. Daniel was very talkative, and when girls standing nearby kept screaming for Ben, he told everyone to shut the fuck up and then he started whispering to Ben, "Hey Ben, hey Ben, listen, they are calling you."

They rolled through the regular set list but with the additions of Pop Song and Nobody Came. Later we talked to Susan Robertson of Murmur and she agreed that they hadn't played those two in a while, so we felt very privileged.

Daniel again finished off the Freak remix by climbing the very unstable speakers (with a little help from Bailey), then sitting on top with spit running down his chin, swinging his legs around and singing "Freak" over and over.

It was a great night and unfortunately it's the last time in Sydney 'till after the break next year, but it will be worth the wait to see what kind of a show they'll bring us next.