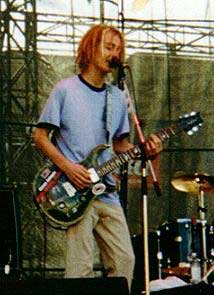 The gates opened at around 11:30. My friend Erin and I went looking at all the booths and then moved to the main stage. We stood about seventh row or so from the stage. After the English band Dodgy went off the stage Bailey Holloway started to bring out Daniel's guitars and the girls beside us started screaming and yelling, "Daniel's guitars, oh my God, he touches them." Gosh, talk about pathetic.

silverchair was late getting on the stage and the crowd was getting impatient. The same girls that were screaming at Daniel's guitars started chanting "DANIEL," which kind of pissed me off because silverchair is just more then Daniel.

Finally some soccer music came on and silverchair walked on stage and broke into Slave. By that time I had moved up to the second row right in front of Daniel. He introduced Bailey as Tony Iommi for Abuse Me; the song sounded great. During Tomorrow Daniel substituted "and there is no dink" for "and there is no sink." The crowd got a good laugh out of that one.

During Freak they stopped playing and Daniel sang until yelling "I'm a freak!" before the guitar part. After a couple of songs Daniel talked, saying that Edmonton is a great city where you can sleep all day and party all night. Of course the crowd went crazy. Then Daniel said to give a halleujah and we did.

During their set Daniel contiued to say "Everybody motherfucking jump" and of course we did that as well. They ended their set with Israel's Son. Everyone got totally into the song. The mosh pit during silverchair's set was one of the roughest and biggest mosh pits of the entire Edgefest.

At the end of Israel's Son Daniel took off his guitar and walked over to the right side of the stage, put some shades on and yelled, "Put your fucking hands in the air" over and over. Then he threw the shades across the stage and walked off, followed by Ben and Chris.

The songs played included Slave, Freak, Abuse Me, No Association, The Door, Cemetery, Tomorrow, Pure Massacre, Madman and Israel's Son (not necessarily in that order). silverchair was the best band at Edgefest and they put on a excellent show. I hope they come back soon cause they are great live. 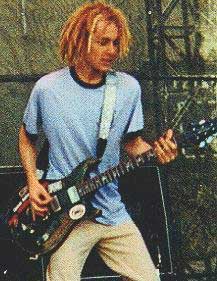 ROCK ON THE EDGE

The term "rocked out" now has a new meaning - after nine straight hours of Edgefest, this crowd was thoroughly rocked out.

For more than 27,000 young fans packed into Commonwealth Stadium, it added up to a dozen bands, two stages and no waiting -- all the rock the kids could eat and then some. Hardly a moment went by that wasn't filled by roaring, distorted guitars or pounding drum riffs echoing across the stadium. It was the perfect summer vacation send-off.

As the name suggests, the Edgefest bands tended to be on the "harder" side of rock. And there are few Canadian bands that rock as hard as Our Lady Peace. Led by Mr. Intense himself, vocalist Raine Maida, the band was the clear highlight of the day. Combining full-throttle power with subtle dynamics, compelling melodies and thought-provoking lyrics, the band delivered an electrifying performance. Not satisfied even after an entire day of music, the crowd demanded an encore.

The Tea Party, which seems to have fallen deeper into some sort of Middle Eastern trip, provided the psychedelic element to the day with a self-indulgent yet musically challenging set. Highlights included elongated, convoluted versions of Save Me, Sister Awake and their new single, Temptation, that had the kids hopping en masse.

Every song Collective Soul comes up with sounds as though it was written to be on classic hits radio. Live, the band is no different. During a somewhat low-impact workout, the band played faithful versions of its highly crafted pop tunes, including Shine, otherwise known as the "hey" song. Collective Soul lacked the raw energy of some of the other headliners, although a rendition of Ozzy Osbourne's Crazy Train went over well.

Yesterday was the last chance for local fans to see I Mother Earth singer Edwin, who had announced he was quitting the band this spring. This took nothing away from the band's performance, which was, as usual, a fiery, funky, messy carnage of musical styles. The crowd loved it.

And now, the runner-up in the battle of the intense bands -- a group of high school rockers from Australia. The members of silverchair may conduct lousy interviews, but they're absolutely ferocious on stage. So what if singer Daniel Johns sounds eerily like Kurt Cobain? At least he's alive -- a live wire, to be more accurate. Leading his band through a full-throttle blast of songs from silverchair's two albums, the 18-year-old singer sounded at times like he was about to pop a vein, so energetic was his performance. One of the most violent mosh pits of the day was the result.

All the way from Britain, Dodgy was an early treat. It was a half-hour display of sweet, Who-like pop songs that approached the tolerable limit of sappiness without actually going over the line. With typical British charm, charisma and the odd marijuana reference, Dodgy proved cool enough to pull it off.

There were more: The Philospher Kings, Econoline Crush, Age of Electric ... fans barely had time to breathe. As each main stage band wrapped up, there was another band on the B stage across the stadium ready to fire up.

There was hardly enough time to check out the usual alternative rock festival trappings, the knots of hacky-sackers, vendors selling the usual ugly tie-dyed fashion, "hemp accessory" booths (even uglier is "hemp fashion"), a skateboard ramp and temporary tattoo parlor (I looked in vain for a temporary body-piercing tent).

Our Lady Peace's Raine Maida had suggested in an interview last week that "maybe the festival thing is getting a little tired." Naturally, he noted that Edgefest was the exception. The only thing that was "a little tired" yesterday was 27,000 kids after nine solid hours of rock 'n' roll.