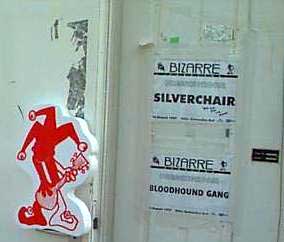 silverchair's performance at the 11th Bizarre Festival in Cologne, Germany was broadcast live on the Internet in RealVideo and RealAudio.

Despite the fact that the show occured early in the morning U.S. time and after midnight in Australia, so many people tried to view and listen to the event that not everyone could see all of the show. However, the fans in attendance enjoyed silverchair's mid-afternoon set.

Daniel was wearing his familiar blue t-shirt, the one that says "Newcastle Police & Citizens Youth Club Bouncers" on it. Ben was sporting his mohawk, and Chris wore his brown t-shirt that says simply "Bud."

Someone near the front of the crowd on Chris' side of the stage waved a large Australian flag throughout much of the show. It seemed that the crowd responded more to silverchair's newer songs than the ones they performed from frogstomp.

As early as Tomorrow, the fourth song in the short set, sweat was dripping off Daniel's face. His hair covered his eyes for much of the show.

He sang, "The water in Germany is very hard to drink" during Tomorrow and used the "living like a schlong," though it was not clear how many people in the European crowd understood the humour.

Following the song, Daniel had his longest interaction of the afternoon with the crowd.

"Fuck, you guys are so loud," he said, probably sarcastically since the huge crowd was making the noise of a group one-tenth its size. "Yeah, rockin' Germany! Germany rocks! Are you ready to rock? 'Cause if you're not ready to rock by now, there's something wrong. [little reaction from the crowd] All right, I'm just gonna play, ready? [no reaction at all] READY? [Crowd: "Yeah!"] ALL YOU MOTHERFUCKERS JUMP! [Crowd: "Yeah!"] Oh."

The Door was next, and when it ended, Daniel sustained some guitar feedback as a stage technician fixed one of Ben's cymbols. Daniel shook his head in disgust and looked down as he could not start the next song right away. Apparently, Ben didn't know what was next, so Daniel mouthed "Faultline," prompting Ben to click his sticks to start the song.

Despite the difficult start, Faultline was very well played and the crowd responded enthusiastically. Instead of the customary "Fuck you!" Daniel yelled "Yeah!" as the final, rocking part of the song kicked in.

But Daniel was in for more annoyance before Freak.

It took a while before he was ready to start, and during the song, he repeatedly looked to the side of the stage, apparently wanting the stage monitors to be turned up so he could hear himself. Veteran silverchair concertgoers will know that Daniel does this frequently, but rarely as much as he did during Freak at the Bizarre Festival.

As Bailey Holloway came out after the song to change Daniel's guitar, Daniel looked at him and waved his hand toward the stage monitors. He sustained some more feedback, and waited for Chris to start Israel's Son. Chris was not paying attention, but he eventually started the song, which ended the festival-length set. Daniel played almost all of Advance Australia Fair as Chris and Ben finished up their work and headed off stage. (Maybe the person waving the Australian flag knew what Daniel was playing, but few others in the crowd likely did.)

Once everyone else had moved off, Daniel remained on his knees in front of his speaker stack and made his guitar sound like an air-raid siren for a while before finally throwing it down and exiting stage left.

German television rebroadcast the final five songs of the set several times over the next few months. The TV audience missed what the band believed to be their only decent song of the day, Pure Massacre.