silverchair made their second appearance at les Eurockéennes Festival in Belfort, near the French border with Switzerland and Germany. 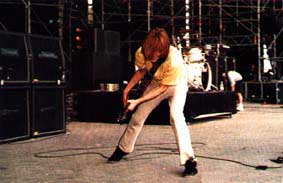 Two years ago, they played a 25-minute version of Israel's Son while the spectators were drunk or stoned, and it was not a good memory for the band.

silverchair played the third and last day of the festival and took the stage at at 4:45 p.m. People were tired and still gathering as the show began. Once again, the show began with recorded applause and a voice that seemed to say "silverchair" and some other words over and over.

The band came on stage (the largest of the three stages of the festival) and started with Slave. Since it wasn't yet dark, the lights could not be effectively dimmed between each set of chords during the intro, and they didn't seem to wait as long as they usually do. The crowd was not very energetic at the start, and Daniel asked the audience to jump more.

Next came Roses, and Daniel said, "Thanks, merci beaucoup." He then counted from 1 to 10 in some kind of French. He changed from his green PRS to the black one (by the way, it looks like a PRS festival -- a lot of guitarists play these guitars, such as the lead guitarists of Biohazard, 311, Rollins Band and the French guitarist Paul Personne). 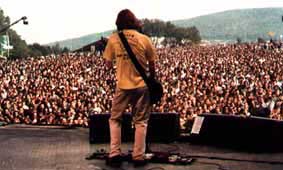 Daniel introduced Bailey Holloway as Tony Iommi to play Abuse Me, then the band broke into Pure Massacre. Daniel played solo on Cemetery, then Suicidal Dream and Tomorrow (new words: "You think you can keep on going living like a suck").

Daniel asked if anyone was from Paris and said that their show the week before really sucked, and he apologized. He maked a two-minute speech, asking us to move, to jump, to rock... he was like mad!!! He added, "Penis in hand? Ready to rock?" They played an awesome version of The Door, then Faultline kicked our asses. They played a new additional intro to No Association which really sounded loud, especially Ben's drums.

There was a new intro for Freak, and the crowd was very loud as they sang along, as they did for Slave and No Association. Freak was played slow and loud; it was great!

Unfortunately, they weren't allowed to play a long show as it was a festival. Chris, whose bass didn't sound as good as the previous week in Paris, began Israel's Son -- it was the best version I have ever heard!

Daniel sang "put your hands in the air" many times. He put his hands around the mic and made an echo which sounded great. People applauded simultaneously as Ben slowed down the tempo. At the end, Daniel played what sounded like a national hymn (perhaps the Australian or U.S. anthem?) Ben kicked his cymbals, Chris hammered his low D string, and Daniel walked in front of the stage. They play awesome versions of this song every time they are in Belfort. Ben finally "destroyed" his drum kit (for the first time ever in France), Chris and Daniel make their guitar and bass ring, and leave the stage.

The second half of the show was absolutely awesome. The concert in Paris the previous week has to be forgotten. It was a pity that they didn't play Madman and Findaway or Leave Me Out. But we were happy to see that silverchair still rocks!

We won't see them for at least a year in France, but we can't complain since they've played six gigs in France in 18 months. They plan to come back to Paris next summer and for a few dates in other French cities.