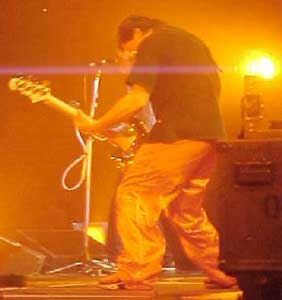 The night at the Tsongas Arena was rougher than I expected. There were fights breaking out and police swarming, but hearing silverchair play made it all worthwhile.

After Fenix TX finished, silverchair's equipment was set up quickly, and after the Taxi Driver theme, they came onstage. For anybody interested, they were in their usual concert clothes, although Daniel was wearing a t-shirt under his trademark sparkly shirt.

When the bassline for Israel's Son started, it was really muffled, and when Daniel started to sing, we couldn't hear him. The problem was eventually fixed, but the opening wasn't as powerful as it could have been.

After Israel's Son came Emotion Sickness, which is really impressive to hear live. The orchestration on the album is so beautiful, but when they played it live, there was a raw power about it that really moved me. Next came Slave, which was terrific-it was heavy and got the pit into action for the first time in their set. At one point, I can't remember when, Daniel did spit on Ben-I only mention this because I read of him doing that at another show-I thought it was funny. 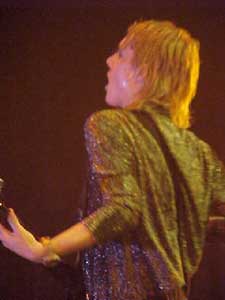 Pure Massacre came next, but the sound seemed a bit off for this one, too-which the intro started, I didn't even realize which song they were playing. Then, Daniel started speaking. He introduced Ana's Song by wryly noting how it was "on television, which made it special, as most things on television are." At least, I think that's what he said. When he started the chorus the first time, the lights on stage blazed a brilliant, fiery orange. It was an incredible effect. In fact, the entire lighting scheme was incredible-congratulations to whomever designed it!

Before they launched into Kick Out the Jams, Daniel said something like, "we always require a period to warm up-what you just witnessed was the period." Kick Out the Jams was a great song-really fast and it really got the crowd energized again.

The next song was The Door, which meant the usual quizzing of the crowd. It went something like this: "who here believes in Jesus? Of course you don't, because you're rock 'n roll. Who here believes in Satan? Of course you don't, because you're not Marilyn Manson." Then he went through the hallelujah's, which got a bigger response from the crowd than I had expected.

Both The Door and Freak were excellent, with Daniel singing "I wish I could be as cool as Fucking all of you" on the latter song. But, the highlight of the evening (at least for me) had to be Anthem. Daniel had the crowd chanting "we are the youth" and it just got louder until the song started. The pit went wild, and the song sounded incredible. By the end of Anthem, Daniel was sucking on the microphone head-I think he's the only one on the planet that can somehow make that look really cool.

Then the show was over, and the band left the stage. I was impressed by the quality of their playing and their composure. The crowd was fairly well behaved during the set, although at one point someone threw what looked like a shirt at Daniel, and it hit the poor guy right in the chest. He didn't even look down or seem to notice, though. I'm just glad it wasn't something heavier. All in all, the guys rocked the place, and I feel very lucky to have caught their show. 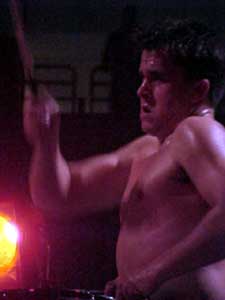