I got up around 6:00am, which is an absolutely insane hour for me, but hey, silverchair are worth it! My friends and I were at the train station at 6:40am to catch the 6:48am train, after about a 45 minute train ride, and picking up 3 groups of friends at different stops along the way, we were at Union Station, finally!

From Union Station, we walked all the way to Much Music on Queen St., we arrived there just before 8:00am, and unfortunately there were already about 15 or 20 people there waiting for bracelets to get in to the interview that afternoon. After about 2 hours of waiting, a couple of security guards came out, lined us against the wall and started giving out bracelets, unfortunately, they ran out about 2 or 3 people ahead of me, but then my day brightened, a guy approached my friends and I and gave bracelets to two of my friends who didn't have bracelets and told them to pick one more person to bring in, they chose me! 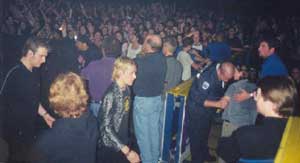 We got to go inside for the Blink182 interview which was exciting, but I couldn't wait until silverchair. After a short break, we were brought back into the studio for the silverchair interview! The band came out in single file and I was standing directly behind Chris, I got to meet and talk to the whole band, but the highlight of this interview, and also the day, was when I got to hold a piniata that the band was given while Chris smashed in celebration of his birthday, which just happened to be that day! After that, I shook Daniel's hand, and said goodbye to the boys, excited about the concert that was now just hours away!

My friends and I gathered and then got on the subway to go to Maple Leaf Gardens for the silverchair, Blink182, and Fenix TX concert. We arrived at the Gardens about 1 hour before the doors opened so we got food, got organized, and planned where we would meet after the concert. We were then ready to head into the concert, we were seperated into smaller groups because we all had different sections, I had general admission tickets, along with my girlfriend, Jenn Heley, and my friends Andrew Smith and Kari Staples. We were inside the historic hockey arena within minutes and the excitement could be felt in the air.

The first band to play was Fenix TX, they played for about 20 minutes and put on a pretty good show. Once they left the stage, silverchair's gear began to appear quite quickly on the stage. After maybe 15 minutes, the lights went out and the Taxi Driver theme blasted out of the P.A.

Israels Son- very powerful! I was very impressed, this being the first song, I was expecting the sound to be off, but it was excellent! Thanx Alex! The boys were really into this song, Ben was hitting his drums harder than any other time I've seen him, but still, as usual, he NEVER missed a beat! Chris was bobbing up and down, and jumping around to the beat, while Daniel was putting force into the song lyrics, as well as putting on a show for the excited crowd who were already in a frenzy!

Emotion Sickness- this was the best I have ever heard this song! This is my third 'chair concert this year, and by far the best! The emotion being put into this song was not only felt through the music, but also through the expressions on Daniel's face! The song was played beautifully, and I still can't believe how quickly Ben picks up once it approaches the heavy portion of this song, I think he hit his kit harder during that section than any other time during the night, very impressive!

Slave- this song blasted the pit! People were jumping and flying in every direction, all enjoying them selves thoroughly! This song was played absolutely flawlessly and sounded great!

Pure Massacre- I must say that I thought this song had lost some of it's force during this tour because of the lack of heavy vocals, but not tonight, they ripped through this angry tune with force! Daniel's vocals were rough and the guitar was loud and heavy, which complimented the perfect balance that was achieved with Ben's drum kit, and Chris's bass was also at the perfect volume, like I said, this was the best I've heard this song sound in a long while, keep it up guys!

Ana's Song- as always, this song was beautiful. Lighters appeared throughout the arena which gave the song an almost eerie feel to it. I think everyone in there understood, to certain extent, the true meaning of that song.

Satin Sheets- truly awesome! The boys went nuts during this song, it was VERY heavy and great! It set off the pit after it had cooled down during Ana's Song and got the whole place rocking!

Miss You Love- this song sounded different for some reason, although it was played the same, it felt different. Daniel played the song with the emotion it was written and it gave it an awesome feel, he improvised on some vocals towards the end of the song and it sounded great! Overall, the song was excellent

Kick Out The Jams!- before they played this song, Daniel had a little chatting outburst and he discussed how Toronto was very important because there was a place in Newcastle, where they live, called Toronto, and that made us special, he then proceeded to comment on how Canada loves silverchair and Ben brought out a flag that was given to them by some fans earlier that day! I have only heard this song once on a bootleg, so I didn't really know the song, but I thought it was still impressive, it got everyone jumping and Daniel was doing weird hip movements, similar to those of Elvis Presley, it was very funny!

Happy Birthday- at this point, Ben came out from behind his drum kit and sang happy birthday to Chris with the crowd while Daniel made some weird hand gestures, it was pretty funny, Ben cracked up during the middle of the song, but recovered in time to finish it off!

The Door- Daniel started it off by doing the usual hallelujah request, although he went one extra, before breaking into the opening riff, but once the band kicked in, the whole crowd was jumping, it was great! There was some new improvising, most of which sounded really good, and Sam got his traditional keyboard solo!

Freak- this song kicked ass! For the first half of the song, Daniel sang the song normal, but after the first chorus, he decided it was time to scream, it sounded so awesome to hear some screaming again! That's one element of silverchair that has quietly faded, but I'm glad to see is coming back! He continued to scream while Ben pounded his drums to death and Chris bobbed up and down just asking for whiplash, right until the last note of this "anthem for the outcasts!"

Anthem- this song is always huge live! There's just something about that song that makes the crowd flip! The mosh pit exploded and steadily grew until 3/4 of the floor section was all moshing! Ben was bobbing and pounding the kit, Chris was jumping around like the ground was on fire and Daniel was prowling the stage and obviously basking in the reaction the crowd took to Anthem, his Anthem, silverchair's Anthem!

Spawn Again- I could not believe it when I heard the opening notes to Spawn Again coming through the P.A., and as I looked around at the stunned but pleased faces around me, I knew I wasn't the only one! silverchair put everything they had into this one song, especially Daniel, who screamed his heart out to us for the full 3 minutes and 25 seconds of pure insanity! Ben broke a stick while abusing his mother of pearl drum kit and Sabian cymbals, but it went un-noticeable, he never even missed a beat! All three members of silverchair put 150% into that song and the 11 before, leaving thousands of happy silverchair fans an awesome story to tell!

I got to my seats right before Pheonix tx stepped on stage at 6:30. They were allright, just a straight forward punk band, like I was expecting. Near the end of their set, the came out with these big plastic penis' and started playing around with them. That was pretty funny.

Then it was time for silverchair. After the Taxi theme, Chris started playing the Israel's Son riff. Following Israel's Son was Emotion Sickness, Slave and Pure Massacre. Every time silverchair plays Pure Massacre, they always switch something up and make the song even better. In the intro right before the drums come in, Daniel yelled "GET THE FUCK UP." This was the first time the pit really got going. After that, Daniel said that the next song you have heard on the radio and he started Ana's Song.

If I have one complaint about silverchair concerts, its all the teenage girls who are just there because they think Daniel is hot. They don't even care about the music. Satin Sheets and Miss You Love followed Ana's Song. Then Daniel started to talk about how much he likes Toronto and the Maple Leafs. He then said that they had a present for us and Ben held up a Canadian flag that had "silverchair loves Canada" written on it. Daniel said that the next song is going to be called Toronto and the played Kick Out The Jams. Daniel then asked for a "hallelujah." And of course this lead into The Door. A very solid version with Daniel adding a couple of solos here and there. They then played a very heavy version of Freak and ended with Anthem. And with that they left the stage. But that wasn't it, after a 5 minute standing ovation, they came back on to ply an excellent version of Spawn Again.

After the show I went to the back of the Gardens and got Ben to autograph my ticket stub. This was my fourth silverchair concert so far, and it was just as good as they all are. The only disappointment with this show was that they were before Blink 182 who is just a crappy 3-chord band with no talent. I was very surprised with the crowd reaction towards silverchair as I have read that there is hardly any at the other shows. I guess thats why silverchair likes Toronto. A great show and I can't wait till they come back, which will probobly be at least a year.