silverchair are one of the tightest groups I have ever seen perform. As you can guess, they had the audience in the palm of their hand, and I bet there would have been two or three girls there for every one guy. The only thing louder than the music was the screaming of girls who hadn't hit puberty yet. 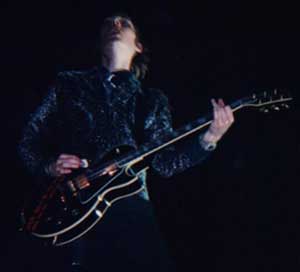 Kicking off with the three openers from each album (Emotion Sickness, Israel's Son and Slave), they showed the crowd that they were here to rock...hard. Easing into Abuse Me, the 'chair showed they could mellow out just as effectively when the need was there. So, when they played Ana's Song, the climatic build-up was fantastic, holding the audience in awe. Adding to the eerie mood, they launched into Suicidal Dream, prompting some cigarette lighters to ignite.

I think it was at that point, when Daniel decided to say more than two words. He offered the obligatory thank-yous and welcomes, then launched into more songs from Neon Ballroom. Paint Pastel Princess (my personal fave) was electric, followed by a rousing Point Of View. After an extremely energetic Madman, Daniel introduced their next song as being about the sun.

They launched into Tomorrow, to the crowd's delight, but we only got a verse or two, before the onslaught of Satin Sheets tore through the air. Daniel told the crowd that their was no need for the people in the seats to stay seated, urging all to stand up and jump. "I'm not just saying this 'cause I'm the frontman. You are allowed to stand up now!" For something different, he tried to convince the lounge area punters to sit down.

With everyone ready to jump, Daniel started The Door and warned that there will be an encore ("That's how we do these things,") but there had to be plenty of cheering at the end, and lot's of jumping and headbanging till the end. Pure Massacre adding fuel to the fire, before being cooled by a great performance of Miss You Love.

Tearing into Freak, the crowd were roused into singing "Body and soul, I'm a freak" along with the band. Daniel then asked the audience for some volunteers to help with their last song, to which he received a barrage of screaming female adulation. With the help of security, fifteen or so guys and girls were selected to join the 'chair on stage, and be part of a "choir" to help sing Anthem For The Year 2000.

Emerging to the stage for the encore, a shirtless Ben (as usual) walked up to Daniel's mic, with his shorts down far enough for the crowd to cop more cheek than necessary. He proceeded to spit water onto the hot moshpit ("I thought you all liked watersports here,") and walked back to his drums, blatantly showing his bum-crack.

As they prepared for the encore, Daniel said that they had tried to play this song, but had fucked it up. He then screamed "Kick out the jams, mother fuckers!!", signalling the start of the old MC5 classic. To close the show, the launched into an extremely intense rendition of No Association. What a fantastic show. The boys were brilliant. I was disappointed that they didn't play Paranoid, but you get that. silverchair can only get better. Well done, lads, you were fucking awesome!!

I arrived in the city about 5 pm in the afternoon. After spotting a friend, we headed off to the hotel that they were staying at. It also happened to be the hotel that the band (silverchair) were staying at. We waited outside and spotted Chris Joannou in the second-hand bookshop across the road. He came out and everyone rushed to get things signed and have photos taken, and he then disappeared back into the hotel.

About an hour or so later, Ben Gillies and Sam Holloway came strolling back, and again everyone rushed to get things signed and photos taken. Sam stayed around for a little while, then nicked off into the hotel. At one point, Ben looked at all the cameras and promptly said "You know, cameras can get so annoying", and then went back into the hotel.

My friends and I then proceeded to make our way back to the Entertainment Centre, where we went inside, bought merchandise, found out that we had missed meeting Daniel (doh!), then headed into the lounge area. As we had missed Pre-Shrunk, we only saw Placebo and silverchair.

The lights dimmed not long after we went in, and Placebo took their time to come on. Brian Molko (lead guitarist/vocalist) was at his stunning best and proceeded to show us what he was made of. They played several songs, including their current hits, "You Don't Care About Us", "Every You, Every Me", "Without You, I'm Nothing" and the crowd fave, "Pure Morning". They then put down their instruments and walked off, leaving a very pumped up crowd (pumped up for silverchair, that is).

After another break, the lights dimmed again, and this time, the stage was bigger. They had removed the curtain and revealed the neon lighting designed especially for silverchair's set. After much yelling and screaming from the people around me, and noises which preceded their entrance, they arrived, fresh and energetic, and ready to face just another rowdy crowd which was Perth. Daniel was in his dark blue glittery shirt, Ben was shirtless as usual, and Chris was comfortable in a casual tee.

Daniel was being funny throughout the night, making comments like "C'mon, you muthafukers, JUMP!", "Rock like we know Perth can", "Who here believes in Jesus?", telling everyone to "put their hands in the air", and at one stage, he had everyone who was in seats standing up, and everyone who was in the mosh sitting down. He then went on to say that "The next song is for all the people who are sitting down..." and went into The Door, after which we all stood up again and started jumping. After one song, he even said "danke schon," which means "thank you very much" in German.

He even told us that they would be doing an encore, and told us to do some chanting after they went off the stage. The crowd thrived on the guitar solos where Daniel would get as close to the crowd as he could, without getting off the stage. In total, there were eighteen songs played, including the encore songs. Here are the songs (in no particular order):

Emotion Sickness
Israel's Son - (No crude remarks in this song!)
Ana's Song - (Out came the lighters)
Slave
Abuse Me - (Out came the lighters again)
Point Of View
Miss You Love - (I almost cried at this one)
Tomorrow - (Which, after the first verse, led into Satin Sheets)
Paint Pastel Princess
Leave Me Out
Freak - (Unfortunately, no men in boiler suits for this one)
The Door - (Everyone was jumping)
Pure Massacre
Suicidal Dream - (The lighters came out once again)
Madman - (Everyone was jumping again)
Anthem For The Year 2000 - (Daniel got the security crew to get about a dozen people from the crowd onto the stage to help with the chorus)

After they played "Anthem", they left their instruments, and walked off the stage. The crowd then proceeded to chant (sil-ver-chair! sil-ver-chair!) over and over until they came back on. The first to walk to the microphone was Ben, who went on to say that "My name is Ben, and I love water sports!". Daniel then took over and they promptly went into the next song. It was a cover of MC5's "Kick The Jam" and it sounded great!

No Association was next. A nice, hard version of that song got everyone in the crowd jumping. And no sooner had that song finished, silverchair left their instruments and left the stage again, this time for good. The lights came back on, and we all shuffled out of the lounge area, after what was a truly fantastic concert. Oh, and I forgot to mention, yes, I survived the mosh pit, and stayed in for the entire set, which I was very pleased about. Another rockin' silverchair concert!