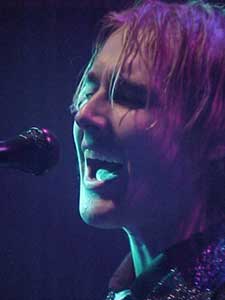 There is something special about seeing silverchair play live in your home town. Something about the feeling you get when they walk on stage and the crowd erupts, as if the band have come all this way just to play for you.

After months of waiting for this show, months of reading reports about concerts overseas, I finally got to see silverchair play their new live show here in Canberra (the capital of Australia and its largest inland city). After hanging around the foyer talking to friends before the concert (unfortunately I missed Pre_Shrunk and Placebo), we went inside around 9pm as silverchair were due to take the stage at 9:15pm. The Royal Theatre is a medium sized venue and has a large floor area with seating extended back. The venue wasn’t filled to capacity, but by the time the lights dimmed, the floor area in front of the stage was packed as were most of the seats. 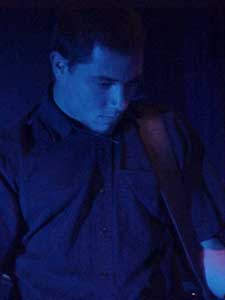 The Taxi Driver theme boomed through the theatre and the crowd went crazy. "Are you talking to me? Are you talking to ME?". As the band took the stage, the high pitched roar drowned out the rest and continued as the band took their places and drove straight into Emotion Sickness, which was slightly faster than the recorded version. I’m really glad silverchair are opening with this track, those first chords always send chills up my spine, and when Daniel sings with an upward inflection the music goes to another level. Sam also drives this song from behind the keyboard, creating a one person orchestra.

As Emotion Sickness wound down, the people in the mosh pit got a quick rest before about five spotlights lit up Chris as he played the famous bass intro to Israel’s Son. The light show for this silverchair tour has been nothing short of spectacular. silverchair’s "lighting guy" Hugh Taranto has outdone himself with the stage set-up and light show for the Neon Ballroom tour. Each song has an individual colour scheme (for example: red, yellow and orange for Pure Massacre, blue and white for Suicidal) and it’s a shame the band cannot take it overseas. Sometimes I found myself unsure whether to focus on the band members or the light show.

Israel’s Son was followed by Slave and both are staples of any live silverchair gig. After playing these songs so often, it’s always interesting to see what Daniel does to keep these songs interesting for himself and the rest of the band. Instead of just cranking out an exact copy of the CD, he adds in little guitar solos or sings in a different octave.

The guitar assault lightened a little for Abuse Me, but Daniel still yelled ‘every mother fucker jump’ before singing ‘throw the sailors overboard’. This song didn’t get as big a reaction as last time they played in Canberra, but it is still a great live song and has an excellent mix of "mellow" and "moshing" parts. 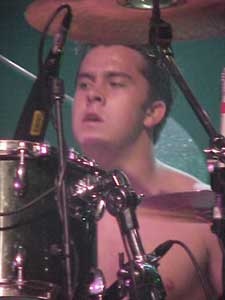 After Abuse Me, Daniel made his first comments of the night and then started Ana’s Song. ‘Thank you Canberra. We love you very much. Yes, yes, yes.’ Both his comments and the song got a huge reaction from the crowd. As silverchair’s most recent single it had one of the highest "sing-a-long" factors of the night. The drums for this song are perfect, and when Ben smashes them it drives home just how powerful this song really is.

An old favourite followed with Suicidal Dream. Sam has added keyboards to Suicidal and now it is hard to imagine the song without them. As with Abuse Me, he really adds another layer to this great live song.

‘Thanks a lot. This is off our latest album’ With that, Daniel launched into an amazing version of Paint Pastel Princess. The guitar in this song is really cool, and shows how far silverchair have come since Suicidal. This song got another great reaction from the crowd, and once again Daniel commanded them to ‘Jump!’ towards the end.

Madman was next, and I’m so glad they are playing this live. Ben’s awesome drumming and Chris’ thick bass have allowed Daniel to add in lots of little guitar "squeals" and solos without losing any of the heaviness. He also moves from one side of the stage to the other, pausing on Chris’s side as they both rock together in time. With the amazing light show and new guitar solo, this has definitely become one of my favourite live songs. A flat out silverchair assault and a reminder of earlier times.

‘Thanks Canberra, yeah yeah. We want to thank you all for coming tonight. I wanna thank Placebo and Pre_Shrunk for playing with us, but we especially wanna thank Canberra. "Laurie Oaks, Canberra."’ [Laurie Oaks is a political correspondent for Channel 9, an Australian television station. He is well known for always ending his news updates with "Laurie Oaks, Canberra"]. Daniel then teased the crowd with the intro to Tomorrow. ‘Just joking. That’s next.’

I was then shocked to hear the intro to Dearest Helpless. This is a rare live song and I wasn’t expecting to hear it live. Musically it is very similar to the album version, although Daniel does a bit of a Jonathan Davis-like roar in some parts.

I’m sure many people were surprised when Tomorrow was morphed into Satin Sheets after one verse. There was the squeal of feedback and then Daniel yelled ‘1-2-3-4!’ to kick off an awesome version of the song. 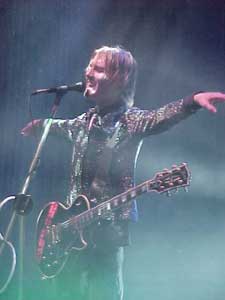 The amazing Miss You Love followed, once again similar to the Neon Ballroom version although Daniel did sing some parts slightly differently.

He was more talkative than usual before the "Jesus and Satan" part of the show. Being in the national capital, he made reference to John Howard, Australia’s prime minister (who is responsible for increasing university fees, for funding cutbacks to the ABC, etc etc). ‘Thanks. Does anyone here believe in Jesus Christ. No? We have one believer. One believer in Canberra. One person believes in Jesus. Does anyone here believe in Satan? Ssssatan yeeeah. All right, half believe in Satan, one believes in Jesus Christ. Does anyone here believe in Mr. John Howard? John Howard’s more popular than Satan and Jesus. Whether you like him or hate him, you must respect that he is the leader of our country. He is leading us into the next millennium. [By this stage the crowd was shouting "No!" and booing]. John Howard is Australia to the rest of the world. John Howard is our representative, [sarcastically] so we must be proud, and stand by his liberal ways. Yes, yes, yes. Can we get a hallelujah for John Howard?! Can we get a hallelujah?!?! Can I get a hallelujah?!? [Half the crowd is girls screaming, the other half are yelling No!!]. All right, all right, not for John Howard. We’ll do it for Satan, we’ll do it for Satan. Who wants it for fucking Satan? Can I a hallelujah?! Can I get a hallelujah?! Can I get a halle-fucking-lujah?!?’ With that Daniel strummed the intro to The Door and got the mosh jumping.

But there was another surprise in store, especially for Sam. Unbeknownst to Sam, the other three had organised to stop halfway through The Door to give Sam an impromptu "solo". One minute he was playing along with the band as normal, the next he was playing all by himself as Daniel announced ‘Sam Holloway, keyboards’ to the crowd. Ben and Chris totally cracked up, and then the band went on to finish one of the best versions of The Door that I’ve heard.

Pure Massacre was next, with Daniel once again adding slight variations in the guitar and vocals. Chris had not missed a beat all show and was still going strong, hunched over his bass, mouth open. During the whole gig Chris owns his side of the stage and commands an awesome stage presence.

After Pure Massacre, Daniel spent the next couple of minutes inviting people up onto the stage to help with Anthem For The Year 2000. Here are some of his comments: 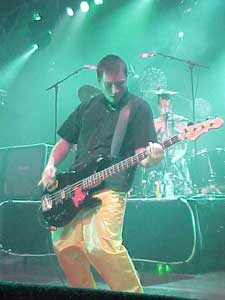 ‘All right we need volunteers. [The crowd goes crazy] In order for this to be the greatest rock’n’roll moment of Canberra’s history, we need volunteers who are willing to sing LOUD. All right, all right, security we need people out of the crowd. We need the one with the shades on, because that’s a song we’re never going to play again [Daniel refuses to play Shade live, although he did play the intro last time they were in Canberra!!]…You come up ‘cos we feel sorry for you…The one on the shoulders, come up…You don’t even know what you’re singing yet, it’s gonna be a big surprise. You’re probably gonna fall in love with Ben. All right, that’s all we need Canberra, that’s allllllll we need. They’re going to apply the "We are the youth" T-shirt. Apply the shirt. Apply, apply!!…Is that enough people? Yeah we need more people. Yeah yeah this is the way, Canberra! Canberra we need more fucking people!!…Oh fuck they’re coming from everywhere, we don’t need you anymore, it’s cool. All right have we got enough people? This is very unorganised and very un-Hole of us [Courtney Love, the lead singer of Hole, is well known for pulling crowd members on stage. Both bands also played recently at the same festival in Canada.]…Have we got enough people? All right, that’s it, we’re sorry Canberra. This is all we can allow, it’s all our profession can allow us. Are you ready to sing? If you sing fucking loud you all get a hundred dollar bill. At the end of the performance we’ll meet you out the front at 11:04, and we’ll give you a hundred dollar bill, but be fucking loud. All right let’s go. Are you ready Canberra?! Are you fucking ready for a rock’n’roll anthem?! Yeah c’mon Sam hit the fucking sample!!’ The band then launched into Anthem, the crowd chanting "We are the youth" during the intro, which continued into the first verse!!

After Anthem the band left the stage, but returned after much cheering from the crowd for an encore. The entire place went crazy as Freak blasted from the stage.

Daniel’s last comment for the night was a simple ‘Thank you’ before playing a slightly different intro to No Association. The slight variations continued throughout for the best version of the song seen in a long time (according to people "in the know"). It was a huge finale to an amazing show.

With a show of this size, it is not just the band who are responsible for such a great gig. All the production staff excelled in putting together an amazing live concert that few Australian (or even international) bands can match.

Again silverchair proved that they are an awesome force live. Daniel has obviously worked on adding and modifying the guitar parts in many of the older songs. Ben, Chris and Sam produce a wall of sound which allows Daniel to play a solo without losing that thick silverchair sound. Very few bands can play the variety of music that silverchair do, but somehow the ‘chair make it look easy. Dearest Helpless and Sam’s solo during The Door were nice surprises and made for a great show (there’s something about seeing silverchair in your home town). Little did I know what was in store for Wollongong the next night!!