Each of the three times I've seen silverchair live this year I've come away with a particular observation. The first- just how far they've come musically; the second- how incredible Daniel's vocals really are; and the last- how much they ROCK. 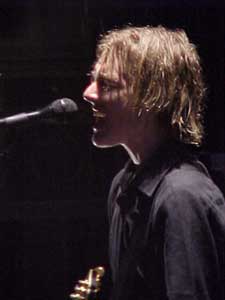 Let me first start off by saying that I live in Virginia, nowhere near Seattle. But while on vacation on the west coast I managed to convince my parents to let me fly to Seattle the day of the concert to go to the show with my cousin and two friends who live there (all three were silverchair virgins- I was very excited for them). After the concert I had to immediately go to Sea-Tac Airport to catch the very last midnight flight so I could get back home the next morning to go work- and I did, straight from the airport in Richmond, Virginia. But the concert was well worth the $200 dollar plane ticket and the 41 hours without sleep. Then again, it's quite possible that I am insane.

The Paramount Theatre was one of the nicest places I've ever been to. It was fit more for a symphony performance than a rock concert. The huge vaulted ceiling and surprising lack of smoke (I don't think smoking was allowed) made us all very comfortable. Comfort was a theme throughout the night. The mostly teenage crowd was unexpectedly tame. People stood around in sandals without fear. Not to say they didn't mix it up… but it was far more relaxed than I anticipated. Daniel also ditched the silver tie, opting instead for just the black shirt unbuttoned at the neck; he looked, well, comfortable. But if there's one thing that isn't comfortable, it's silverchair's music.

They opened, not surprisingly, with 'Emotion Sickness'. For my taste, the vocals were not nearly as loud as they should have been during the verses (this actually seemed to be a recurring thing the whole show). But man when Daniel got to the 'get ups' his voice was crystal clear and all eyes were transfixed on him. Halfway through, he suddenly switched from the light falsetto he uses in concerts to the full out intensity of the album version. It was awesome. 'Israel's Son', 'Slave', and 'Abuse Me' followed and were definite crowd pleasers. 'Pure Massacre' was one of the many highlights, with Daniel putting much more energy and intensity into it than other recent shows. I think I saw a piece of Ben's drumstick fly into the air.

For five songs silverchair let the music do the talking, but it was here where Daniel Johns first spoke. And the magic words? "Don't throw clothing onstage. I can't tell you why now, cos it's too deep. I'll tell you later. We love you Seattle!" We never did find out why. 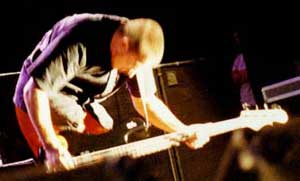 'Ana's Song' was of course much heavier, but Daniel's fragile frame shook with passion, it was really astonishing. But it also deeply saddened me because it was here you really became aware of how painfully thin he looks, honestly he looks thinner than he did even last month. Yet his mood was decidedly upbeat, and he actually became fairly chatty as the evening went on.

Grim irony brought 'Suicidal Dream' right after 'Ana's Song', which has happened many times before, but I never quite picked up on it. It's very clear why this song is so popular even though it was never a single. The lyrics are borderline silly, but somehow this song is extremely powerful live. No thanks in part to the great mix of thundering drums, thudding bass, and intense vocals.

One of the more amusing moments came with 'Point Of View'. After only a few words Daniel stopped singing and yelled something along the lines of: "No, no! Stop! That's wrong," and he looked at Chris accusingly, and questioned him, "Chris?" And then he went on to something about being behind Chris' amp playing solos… I'm not sure exactly, you know how Daniel rambles, and then re-launched the song. 'Paint Pastel Princess' was next and it is definitely among my favorite of their live songs, it's a great mix of soft and hard. 'Madman' is always a high energy song for the band and the crowd alike. This time was no different, with both Daniel and Chris disappearing towards the ground several times.

Another funny moment came right before 'Tomorrow'. I was surprised that Ben and Chris didn't leave the stage even when Daniel was introducing the song as the one that made them a "teenage grunge sensation". He then went on to apologize if we were sick of the song and thought it would demean the show. Then he admitted that he himself didn't like the song. He proceeded to ask Chris and then Ben if they liked it, both responded with a nod, and Ben with a big grin. Then quite surprisingly they played 'Tomorrow' as a full band, and if Daniel doesn't like the song, there were no signs of it. But for some reason he decided not to play the guitar solo, instead opting to vibrate one note while doing a bit of a Ricky Martin hip thing. 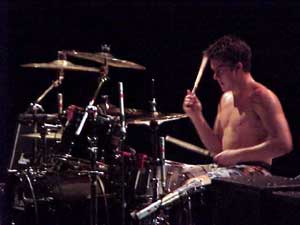 While you may have some doubts about 'Miss You Love' as a single, they will be immediately be erased after hearing it live. The song may be a ballad, but it rocks. And it was another highlight of this show. The mix was fantastic, Alex did a great job.

Of course the time right before 'The Door' is Daniel's favorite time to chat with the audience, although I was very surprised at just how talkative he seemed to be. He went on about signs in the audience and said this about one, "that's a silly sign, I don't like those." And then he asked for people to pass the signs up to the stage, and he grabbed one from stage right. And as if he was telling us all a story, he held it up and read the words, 'you are grunge not rock, we love you,' off it. He preceded to throw the sign on the stage .

After that he asked if anybody had anything interesting or important they wanted to say because he really didn't. Everyone was screaming and raising their hand, but Daniel pretended like he didn't hear them and said, "no?" Then the King of Randomness started talking about Canada and the Edgefests that they had just played. "In Canada the Canadian bands always compare a city to the one they played before." And in a very mocking tone said something like "Yeah Edmonton, Edmonton was louder than you Vancouver, can't you do better than Edmonton?" He seemed to like discussing Canada because earlier in the show he said this: "We just came from being in Canada. Do you like Canada? (crowd responds posivitely) 'Cause every other city in America we've been to doesn't like Canada. I don't know why, it's nice. It was summer but it was cold, too cold for my preference." Continuing on, he said something along the lines of, "we are you and you are us and we are one," and then screamed, "we are Australia!!" And then of course the famed hallelujahs.

More was said but I really can't remember, it was all very amusing, and I was very glad that Daniel was so talkative and interactive with us and Ben and Chris.

The last two shows I've been, I haven't been totally convinced by 'Anthem', it was good but almost lacked something. But not in Seattle, not this night; it was excellent, I was very impressed. The crowd was very responsive and all four of the guys played with an incredible amount of energy. For a moment we were all at Wembley Stadium.

The kids were left to themselves for a few minutes, eagerly anticipating the encore. When the band came back onstage Daniel took a few minutes to thank their crew (who apparently "gives us sexual favors"): Alex their sound guy- "it mixes itself really." 'Tarantula' the lighting guy-"keeps us lighted and turns the lights off when Ben has a drum solo." Bailey, Daniel's guitar tech- "keeps my guitars shiny and my amps amplified." Danny, Chris' bass tech- "who plays all the bass solos." And mentioned John Watson twice- "who's our manager, he does a lot of things you don't know about." Daniel then explained that, "usually we do this on the last show of the tour, but it's a festival tomorrow so we're doing it now. Can't do it at festivals 'cause the other people get annoyed 'cause it takes up too much time." silverchair ended the show with the always effective 'Satin Sheets' and 'No Association.'

This concert was one of the best (and most pleasant) I've ever been to. Even softer songs like 'Ana's Song' and 'Miss You Love' rocked. What separates silverchair from their contemporaries is their music and their enigmatic frontman Daniel Johns. They rock hard with enormous riffs and powerful bass and drums. Daniel is impossible to look away from, his stage presence is immense. It's a strange twist of fate that made this boy a reluctant rock star. He is both angelic and menacing, vulnerable and confident, sarcastic and sincere. And while most are content to just rock out, silverchair do it with melody and the rare ability to really convince you. One look at Daniel's closed eyes and contorted face is enough to prove that their songs are far from menacing or typical . And backed with an awesome crew silverchair put on a truly unforgettable show. And the verdict from the virgins? "It was great" and "I'm really impressed." Makes you smile doesn't it?