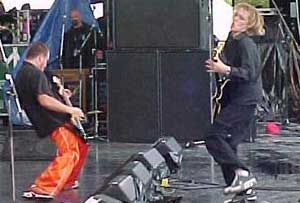 Holy Shit! That was one amazing day! Edgefest rules! I only have one question-why weren't silverchair the main headliner? It was obvious to everyone there that they were the crowd favourite. They had the biggest crowd watching, and the largest mosh pit. Of course, there were other REALLY good bands there, like Matthew Good (who was wearing a CO-FUCKIN-QUITLAM shirt, which was cool, 'cause I'm from Coquitlam) and Finger Eleven put on a great show as well.

Ok, now to silverchair. I have been a fan for about 3 years, but this was my first time seeing them live. I had heard through chairpage reviews about how incredible their show is, and it totally was! If I have trouble recalling what happened, don't blame me because I was in awe the entire time. I moshed and punched people and had fun, but seeing them up there kind of numbed me.

My heart was pounding as the "You Talkin' To Me" started and the crowd went wild. Then the three of them walked out-Chris in a black shirt and his famous orange pants (he had a wicked goatee-thing), Daniel in all black, and ben shirtless (I couldn't see his pants). Daniel held is arms up beckoning for more noise, but the crowd was already screeching.

I don't remember the excact order of the songs, but I do know which ones they played. They started with Slave and Daniel started humping his amp near the end of the song, which was hilarious. Pure Massacre was definetly a crowd favourite, but some bitch behind me kept punching me, so finally I turned around and popped the side of her head. Abuse Me was excellent, but I didn't like the "C'mon , abuse me more I like it - ooooooooohh!" I thought it was better before. 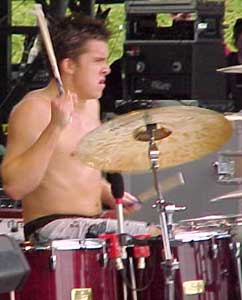 During Israel's Son, some pervert kept grabbing my ass really hard, but I was too happy to care. Emotion Sickness was played very powerfully, and so was Ana's Song. I had this really fat kid beside me belting out the words to every song, and no matter how many times people around me told him to shut up he just sang louder. Arrgh! One other thing I noticed was how many tall people there were. I was right at the front, I'm 5'8 and I could barely see the band.

Tomorrow into Satin Sheets was brilliant, and there were smiles exchanged between Ben, Daniel and Chris (the only time any of them even looked at each other). Madman was wicked, and Daniel ran to the other side of the stage, kicked over a microphone stand then looked directly at me. Freak and The Door both got the crowd jumping, but not as much as Anthem did. Daniel of course got us to yell "We are the youth", and it was excellent!

Daniel seemed quite tired during the set, but neither Ben or Chris did. Daniel only talked to the crowd twice, and I remember exactly what he said:

1) "Thanks. Thanks for co-operating. We're silverchair from Newcastle, Australia."

2) "Thanks. Uh...I was going to say something interesting, but I forgot. No, actually, I just wanted a break to catch my breath. FUCK YOU!!!(He stuck up both middle fingers and was talking directly to someone in the crowd.) Yeah, fuck you % foot tall boy with both middle fingers up. Fuck you. Oh wait, that's a girl! Sorry I...I couldn't see, but I just assumed because of the moustache. (The crowd went wild) Everybody below give a shout to the people on the hill! Now give a shout to the people in the stands! LOUDER MOTHERFUCKERS!!! See? The people down here like the people up there but they don't...oh, I don't know. You people on the hill and in the stands paid good money, so you should be down here getting hurt with the rest of the rockers! Can I get a hallelujah? Can I get a hallelujah? Can I get a halle-fucking-lujah?"

Over all, it was an incredible experience and I hope they come back to Vancouver soon! 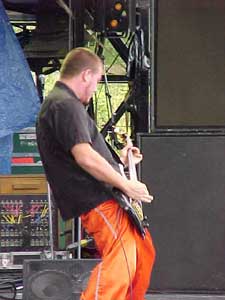