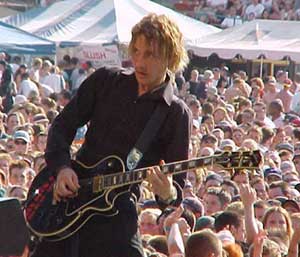 Today, I saw silverchair for my second time at the outdoor rock festival that tours Canada, called Edgefest. In 1997, silverchair also played this tour, and completely stole the show. In 1999, they once again, did not disappoint. My friend Kelly and I arrived at Commonwealth Stadium at around 10:45, with the doors opening at 12. We could hear the bands warming up inside for a good hour, and were getting really excited. Then 12 o'clock FINALLY came around, and the security guards said to have your bags ready to be checked, which made me scared, cause my camera was in there, and cameras were STRICTLY forbidden. 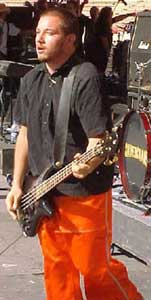 We got passed the doors without getting our cameras stolen from us, and made our way to the floor of the stadium. We walked around the floor for a bit, and I found a booth that was selling merchandise, so I picked up a silverchair t-shirt, and a neon ballroom poster; both are now hanging on my wall :). After 20 minutes, we made our way to where the mosh pit was, ready to wait for two hours before the first band even came on.

After two hours, we were up to the second row of people and the Rascalz came on. They were surprisingly good, despite what I thought of them from clips on t.v., and I caught some sun screen they were throwing out to support their new album. Then came Wide Mouth Mason. The mosh pit went INSANE!! They're HUGE in Canada, and rightfully so, because they are totally awesome. Two more bands came on after Wide Mouth Mason, being Edwin, who had alot of stage appeal, and The Matthew Goode Band. Both were alright. The next band, was the godly silverchair. This was who the entire 30, 000 people were waiting for.

Roadies began bringing out silverchair's equipment, and the crowd went absolutely NUTS!! We started to chant, "silverchair, silverchair, silverchair." Finally after about a half hour or so of waiting, their intro music began. A few minutes later, Chris, Ben, and then finally, Daniel sauntered onstage, all of them wearing the same clothes they usually do. Slowly walking up to the mic, Daniel grabbed his pic, cracked his jaw a couple times, and broke into a hardcore version of Slave, which was so awesome.

They then played Pure Massacre, and everyone sang along. Daniel's stage presence has changed alot over the last two years. He does alot of hand gestures, and facial expressions. he plays to the audience alot more, and uses the entire stage. Chris is also alot more into the music I think. He is constantly head banging, and Ben is thrashing around his drums alot. 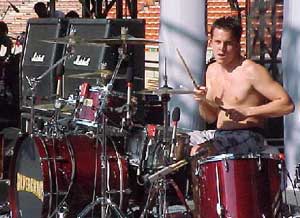 After Pure Massacre, they played about 10 other songs, including Madman, Emotion Sickness, Ana's Song, 30 seconds of tomorrow, then breaking into a TOTALL KILLER version of Satin Sheets (which was by far my favorite song they played), Abuse Me, Freak, Anthem For The Year 2000, and The Door.

Right before The Door came on, we were chanting for water, 'cause it was really hot in the pit. Daniel said, "give the crowd some water. Where's the hose?? We are a band that provides for their fans. So you can't say that we don't provide, cause we do." He then went on to say, "k...when I count to three, I want complete silence. If you do this I SWEAR TO GOD!! Hole will give 100 dollars to every third person in the audience. So when I count to three....complete silence. Ready?? K...1....2...3!!!!"
Of course a bunch of people were really loud. So Daniel gave this totally pissed of look and did a huge eye roll...it was hilarious.

The final song they played was Anthem, and the crowd was chanting for it for a long time. It was an amazing, really heavy version, and Daniel did alot of improvisation in this song, as well as in the others. After Anthem, they left the stage as quick as they came on, and people chanted, "silverchair, silverchair, silverchair, " for a few minutes afterwards. They once again, in my opinion, stole the show in '99. The only thing that would be better, would be if they played their own gig here! 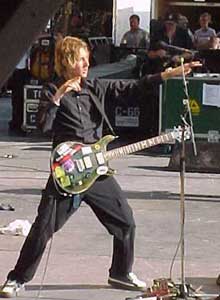 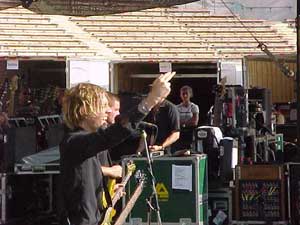