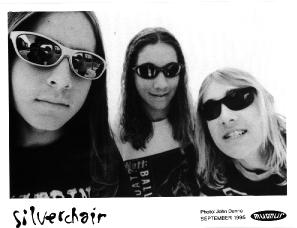 In June of 1994, this power-grunge trio from industrial Newcastle, Australia entered a national demo competition. Their song, Tomorrow, was chosen from over 800 entries, and the prize was a day in the recording studio of Australia's national alternative radio network 2JJJ-FM. silverchair recut Tomorrow and handed over the tape to the station; the song was added to the playlist, and listener response was so overwhelmingly positive that soon Tomorrow was bumped up to heavy rotation.

By December, Tomorrow was the #1 song in Australia -- and silverchair were one of the most popular bands in the country.

Mind you, this was before the trio had signed a proper recording contract, much less released an album -- certainly an unusual sequence of events. By the time of their pact with the Sony-affiliated Australian indie Murmur and the release of a four-song EP, silverchair had amassed a large and devoted following. Still, no one expected their next single, Pure Massacre, to follow Tomorrow up the charts, leapfrog over the earlier track, and claim the #1 position even as Tomorrow remained in the Top 5. But that's exactly what happened.

frogstomp, silverchair's debut album, entered the Australian charts at #1 -- the first debut album by an Australian artist to do so. Within a week of arrival in stores, frogstomp was certified platinum; it is now double platinum, having remained #1 for six consecutive weeks. [Editor's Note: By the end of 1995, the album was certified triple platinum.]

frogstomp is a stunning debut, and a portent of even greater things to come from the band called silverchair.