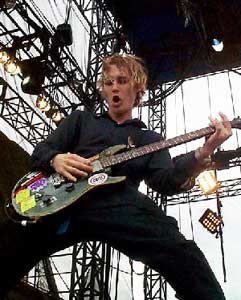 I had just flown in from Halifax, some 2000km away, into Ottawa for two reasons, one, to meet my friends that were going to the Edgefest rock festival with me and the other, to see silverchair!

It was a clear sunny day and perfect outdoor conditions to rock!! After a lengthy 3 hour wait to get in the venue some 30,000 people crowded the mainstage. Canadian hip-hop act the Rascalz, Wide Mouth Mason, solo up-and-comming artist Edwin, and the famed Canadian act the Matthew Good Band warmed up the crowd for what was to be a powerful performance by silverchair. 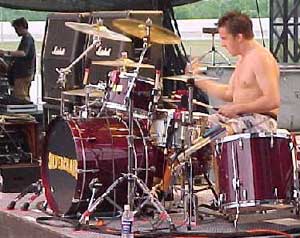 Upon the completion of the Matt Good Band's set, silverchair's drum kit with their logo covering the bass drum took the stage and the capacity crowd cheered at the mere sight of it. I was directly front row centre and noticed that the mainstage area was double the occupancy at this time than for any other performer so far.

From there I noticed even sidestage acts like Serial Joe the 14 year old alterna-band dubbed "Canada's answer to silverchair" and Edwin were watching from the side of the mainstage eager to appreciate the upcomming performance along with the rest of the audience.

Alas the Boys hit the stage Chris, in his patented overwhelming orange pants, Ben, his usual shirtless self, Sam with his Ben-like spiked hair do, and finally Daniel wearing all black, ripped into the opener, Slave, The crowd went excstatic! Crowd surfers galore reeked havoc all over the place, if it weren't for the numerous security guards on hand to pull them off, there would sure have been some serious injuries. I was surrounded at the front by a mass of young teen girls who just stood in awe the whole time starring at the band and singing along to every word Daniel sang.

Next was Pure Massacre which more-than-equally sent the crowd completely off...Abuse Me followed and a group of 5 or 6 drugged up wacko's made their way to the front and sang every word of this song with their eyes tightly closed and at the top of their lungs, so annoying and taking away from the performance were they that security told each of them to either shut up or get out, after lengthy exchanges of obsenities they were escorted out much to the pleasure of the crowd at the front, I don't even think the band noticed 'cause they just kept on pounding out the music. 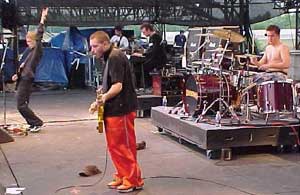 Emotion Sickness was very tightly and well played, Sam was adding great effects to this already magnificient song on the keyboards. At this point Daniel seemed to feel more comftorble with the receptive crowd and wandered around the large stage looking energized yet bummed out in his face at the same time if you could at all picture this description, making everyone "motherfucking ROCK!" He was plain awesome up there with emmence stage presence

Daniel Informed the crowd that there was a storm warning in effect and that, "if anyone wanted to leave, now is your chance, GO! head for the hills folks and save yourselves while the rest of us continue to fucking rock!"

Israel's Son infused everyone again, someone threw something that I think was a shoe right at Daniel's guitar, I don't think he (Daniel) knew who it was but he knew from which direction it came from and that whole area got the big one eyed bird...it was awesome! During the, "Put your hands in the air" part everyone shot those hands up as if they were being held at gunpoint! A great moment was hearing Chris go at that bass like there was no "Tomorrow" really giving the song it's hard edged depth that makes it so driving. 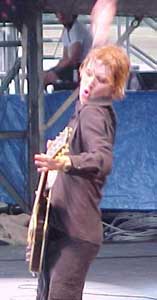 Speaking of Tomorrow, the first verse was played and everyone without exception was singing along to it when all of a sudden the power chords to Satin Sheets kicked in, it was amazing how everyone seemed to change gears almost as fast as the song did and went ape-wild in reaction to the tune. A cool rendition of Freak was played and Daniel allowed the crowd to sing the "body and soul..I'm a freak..." part on our own and without hesitation, we all did.

Everyone was exhausted at this point, and when I mean exhausted I don't mean less energized or tired but more on the dehydrated, thirsty side, chants of WATER! WATER! WATER! caught Daniel off guard, he was like..."What?" and finally made sence out of what everyone was saying and goes, "Ohhhhhhh h2o!!" just as a giant hose poured a strong stream of water all over the crowd, everyone roared in pleasure just as Daniel said, "Give it up for the man with the big hose, round of applause for the event ssstaff (long strain on the "s") yeah event ssstaff!!" it was hillarious.

Fully hydrated now and soaked to the bone Daniel did his usual rendition of, "who here believes in Jesus Christ?" a slew of Boo's and moans greeted this question but then when "hands up for whoever believes in Satan!" was asked, the place erupted, "Satan wins hands down here in Ottawa folks"

The Door lit up the crowd again, the masses of crowd surfers were being plucked by the buckets by the big muscled up guards on hand, some even attempted to get onstage, unsuccessfully I might add. One poor girl suffered an asthma attack and myself along with my new found mosh pit pals helped her to safety.

Madman pitted Ben's strongman drumming at it's very best, it's a sight to see this guy live cause his arms just lay the abuse on that kit! 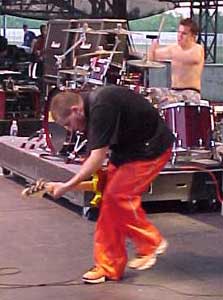 The highlight of the set (and the whole day for that matter) for me was Ana's Song (Open Fire), it was sung so elegantly and emotion-full by Daniel, it captivated the crowd in a way unlike any other song that day and really had everyone gazing at him as if they could relate to it's meaning or at least it's melodic rhythm somehow. Ana's Song is on it's way of overshadowing the success of their "Tommorow" single and is drawing alot of heat and airplay here in Canada which I'm really glad is happening for them because it's such a beautiful song to prove they're so much more (for those who don't already know it) than just a one hit wonder band, and exhibits their evolvement from being rumored as so.

Nearing the end of their set, silverchair delivered one last punch to their already-absolute knock out of a show with, "Anthem For The Year 2000." Ben started it up and Daniel and Chris along with Sam drove through it with him, but not before Daniel got the crowd to chant "we are the youth" 8 to 10 times before the verse was smacked in which had him flashing his middle fingers while singing, "the politicians are so sure" getting loud applause from us all.

And then, just like that, they left the stage as they had taken it at the beginning of the show, to a loud roaring applause for the effort they put in to being one of the last bands out there who truly know how to rock out and leave a lasting impression behind. I don't think the crowd got any bigger that day even when Courtney Love's Band Hole took the stage as many left after the chair's performance. Thanks, silverchair, for giving me great memories to take home with.

I left Friday night and headed for Ottawa. It was a long 2-hour drive with my little sister sitting on my lap and continuously getting on my nerves. We finally arrived at my Dad's cousin's house and Anya and I ended up sleeping on the floor! I barely slept since I was so anxious for the next day. We awoke at around 6:30am and started to get ready. Finally after much arguing we left. 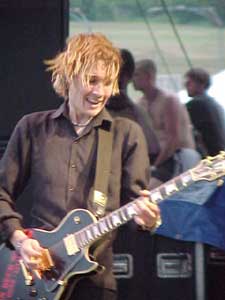 We arrived there at 9:00am. There were about 20 maybe 30 people ahead of us. So Anya and I sat down and prepared ourselves for a long and hot wait. Since I hadn't slept and didn't eat breakfast I spent my time lying on the concrete with my eyes closed feeling nauseous, while Anya made friends and tried to find out where we had to exchange our tickets. Apparently there was no need to exchange them because they were going to let us in with our Montreal tickets.

Anyway, the Rascalz got on and they were ok. Wide Mouth Mason, Edwin and MGB were a lot better! But then the 'chair took the stage. I started to take pictures but I soon realized that my camera wasn't working. I freaked out but managed to fix it right away. The crowd was just going wild! I have never been so smashed in my whole life! Daniel talked so much! He said the usual, "Who here believes in Jesus? Oh, there's a 50-50%. Jesus can you hear us? We are gathered here today...no, no I'm just kidding. Who here believes in Satan? Yeah, what about Mortal Combat? And the killing and slaughtering of innocent people? No, no I'm just kidding again! Can I have a hallelujah? Can I have a hallelujah? Can I have a halle-fuckin'-lujah?" right before "The Door".

He continued on with "Stop throwing thongs at us...please don't throw anymore stuff.” He also said something like, “Thank you for all your support and love. We really appreciate it.” Ahhh. At one point the crowd was screaming “Water…water.” So Daniel ‘s like, “What?” with an evil smile on his face, “What? H2O? Ok get these people some fucking water or whatever…take out the hose. Where’s the guy in charge of the hose. Come on give it up for the event stuff (or maybe he said staff?) and if you don’t know what the event stuff is then don’t cheer,” But of course everyone still cheered. The funniest thing Daniel said was, “there’s a big storm coming and you guys have to leave and go home and get shelter. So go, leave now! No, no I’m just joking. But there’s really gonna be a storm somewhere. I heard about it.” Then I went and scream, “No, I’d rather stay here and watch you guys play!” I know it’s dumb, but what do you want? I was lacking oxygen!

I was so surprised when hey played Tomorrow but they turned it into Satin Sheets. I just closed my eyes and sang along to every song. During Israel’s Son, some chick pushed Anya out of her place. This chick was hysterical! She was crying and taking pictures of Daniel. She would ask the guard to take her out but then she’d say, “No, no…Daniel, Daniel!” Did Anya ever give it to her! She pushed her and was singing Israel’s Son to her! “I hate you…and I want you to know that I want you dead.” Eventually the chick got out and Anya regained her place. People like her make me sick.