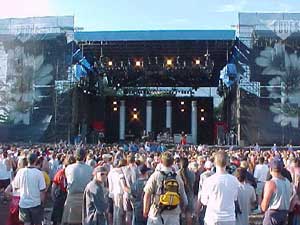 The day started out much better than the day before. It was sunny and warm and there was no sign of rain which was good since I was soaked the day before while watching silverchair play. 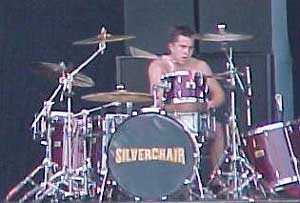 The show was one of the best silverchair shows I have ever seen. When the intro began the crowd began to scream and soon the band walked out on stage. They broke into the first song which I believe was Slave and then after that came Freak which was a nice change. I was happy they mixed up the set a bit because I was afraid that they'd play the same set as the previous day.

They played a lot of the same songs (Abuse Me, Pure Massacre etc.) but they added a few others like Madman and my favourite Neon Ballroom song, Paint Pastel Princess.

One of the highlights was during Tomorrow. I expected them to play half of the song and then break into Lie To Me but instead they played a bit and broke into Satin Sheets! I was very surprised and also impressed.

The band seemed into it a lot more that the day before. I saw Ben try to spit on Chris or something and Daniel talked a lot more. He said something about Alex, their sound guy, and how Alex tells everyone that he and Daniel have sex. It was hilarious! After Daniel said that he had a big grin on his face and he was staring right at Alex who I assume was laughing as well. Daniel also asked the Jesus and Satan questions but added at the end, "Who believes in Mortal Kombat?" which received the most cheers.

It was a very amazing and funny show, definitely one of my favourites.

The second day was perfect. The sky was clear, without the threat of rain. It would be possible to concentrate on watching the band rather than trying to avoid the mud that everyone was throwing. 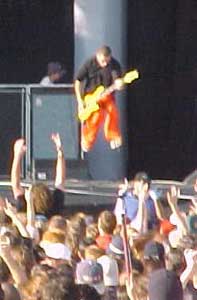 The wait was not as bad, but still agonizing. We went to a different spot, right beside the soundboard. It was a better view, much closer. They were much faster in setting up than the day before, as they didn't have to get all the water off the stage or push everything back 20 feet. They even put up four pillars with neon around them but they were useless because the band was playing in the daylight.

I was hoping they would change the set list up at least a little bit from the day before. If I have one complaint about silverchair's live shows, it's that they play the same songs and in roughly the same order night in and night out.

They began the show with Slave, which was a good change from yesterday. Next was Freak, and continuing with the Freak Show theme they played Abuse Me.

Israel's Son came next, followed by Emotion Sickness. After Emotion Sickness, I decided to go a bit closer to the stage, and made my way to the back of the pit. It was perfect.

Ana's Song came next, then they started Tomorrow. They were playing all right, but still it seemed like something was lacking. Just like the day before, they cut Tomorrow short. They did it a bit sooner the second time though. I was expecting Lie To Me again, but Daniel screamed "One two three four" and started Satin Sheets, one of my favourites from Neon Ballroom. That's when the show took off. It was the best live performance of the song I'd heard. Madman was next, and was also played extremely well. Daniel was all over the place. He even climbed up something at the side of the stage and played part of the song. He was really into it. After Madman came Paint Pastel Princess, which I thought was great because it is my favourite song and I wasn't really expecting them to play it. It was played better than any of the other live performances of it that I'd heard. 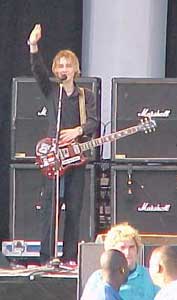 An amazing performance of The Door came next, Ben played much of the song with a huge grin and his tongue sticking out. With Sam on keyboards for this year, the song has become that much better, one of their best live songs. Pure Massacrecame next, without the vocal delay they used the day before. After Pure Massacre, Sam went back behind the keyboard and began Anthem For The Year 2000. The crowd was not all that much better than the day before on the "we are the youth" part.

After Anthem ended, their amazing show was over. They were all really into it, and having a lot of fun. Daniel was much more talkative the second day, he said something about his pet being very sick back home in Australia (He was only joking). He also made comments about how all the feedback was pissing him off. He said it was Alex's (sound guy) fault. He told the crowd "Me and Alex have sex all the time. We don't really, but that's what he wants you to believe. It's all a big media ploy". The guys in the soundboard area got a kick out of that. It was great to see them all having a good time. This was easily the best silverchair performance I'd seen, and I can't wait to see them again.