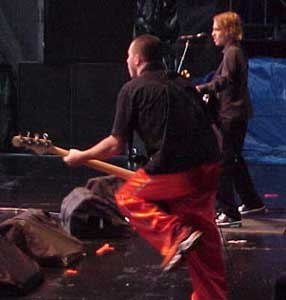 By ERIC GILL and WES DENLEY

My cousin Wes and I left Toronto at 10am and arrived at Molson Park at 1pm because of the traffic. We watched at the main stage for the first 4 bands and then we had a rain delay and silverchair came on an hour after they were scheduled to play. It was an amazing show from the beginning when chris open with the bass line for Israel's Son to the end when we chanted "we are the youth" at least 20 times before they began playing Anthem For The Year 2000. They were by far the best sounding band at Edgefest and most of the people at Molson Park were there for mainly silverchair. Once their set was over alot of the people in the crowd left.

Israel's Son: It was amazing and it got the crowd moving from the beginning bass line to the end where Daniel belted out "I am, I am, Israel's Son, Israel's Son I am.

Emotion Sickness: Not many people knew this song yet but it sounded amazing and the heavy part in the middle got the crowd moving.

Abuse Me - Anthem: Daniel's vioce was cracking pretty bad and I think he had a really soar throught but he still did his best and whaled out the lyrics. Over all it was an amazing show. 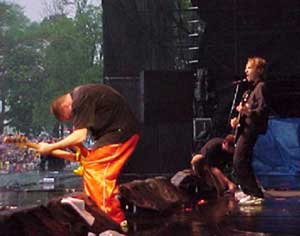 Mother Nature's wrath was clearly felt as she decided to make it VERY MOIST for this Canada Day celebration known as edgeFEST. A torrential downpour was dumped on us eager concert-goers as we waited patiently for silverchair after Matthew Good Band's set...and I mean PATIENTLY! sc were scheduled to come on at 6:40 pm, but were delayed until around 7:50 pm thanx to technical complications suffered from all the water. More and more bodies crammed into the main stage area to see the boys and I was forced to get more "personal" with my fellow mosh-pit maniacs than I really wanted to (if you know what I mean). The rain was welcomed at this point as it cooled us off - the body heat alone was getting unbearable!

It seemed as though everyone at edgeFEST was pumped to see sc. As we got soaked, we chanted for silverchair between singing/shouting our national anthem on the top of our lungs. The mayhem was awesome.

EVENTUALLY, silverchair took to the the stage amidst deafeningly hysterical cheering. I'm positive they got the biggest response of the day, even bigger than for Hole who are headlining.

Without a word, Chris kicked into the bassline of Israel's Son. The pit lurched forward violently and I knew it would only get crazier. Crunchy guitar riffs accompanied by Ben's trademark beats transformed the area into a massive sea of bobbing heads, thrashing bodies and crowd-surfers.

Emotion Sickness followed, slowing things down only a bit - this song retains the same epic punch that's on the album but is considerably heavier live. Daniel smiled at seeing the crowd's enthusiastic reation and made some comments about how we were very "rock 'n roll for sticking it out in the rain" or something like that, which was rewarded with more cheering. 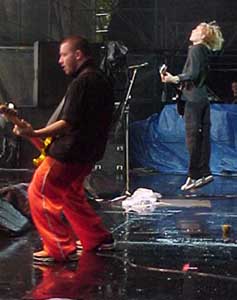 Slave was wild and by this time I was headbanding and jumping around like a madwoman. The pit was getting really vicious and Pure Massacre only made it worse. One of those huge gaps where people "run around in big circles and just like punch people" opened up and for one guy with blood running down his head, it didn't slow him down a bit.

Abuse Me sounded wicked and everyone shouted the "throw the sailors overboard" part with Daniel. I was surprised to hear so many people sing all the lyrics to 'Ana's Song' and the chorus matched the thunder of the rain...my only beef was that Daniel's mic could've been turned up a few notches.

Tomorrow was cut short with a savage version of Lie To Me - My friends Jenn, Becky, Joyce and I must've looked like we were having seizures cuz we was screaming the lyrics to this one like psychos. The Door continued to rip it up even though I find this song quite annoying on album and Freak served as some rabid confessional when the amassed youth all proclaimed in unison that "body and soul" we were all freaks!

The futuristic sounds of 'Anthem' poured out and Daniel conducted the ritual "we are the youth" chanting sequence. Anthem is absolutely gargantuan live and left many thirsty for more silverchair even though it would be their last song today.

After that, sc dashed off the stage and only the sound of mild distortion wafting through the speakers was left - well, that and 35,000 hard-rock fans madly cheering.

During sc's blistering set, I had managed to seriously fuck up my favorite pair of Vans, shred my cargos to mid-calf, and cake myself in mud...but baby, you'd better believe I had no regrets. And as I left the pit in slightly dented form due to multiple kicks to the head and jabs to the ribs, I passed by a throng of adrenaline filled boys. I heard one of 'em say to the others, "shit man, silverchair kicked ass! If they're coming back next year, I'm there!" Agreed. The only letdown?...The fact that I wouldn't be here tomorrow to see 'em do it all over again. 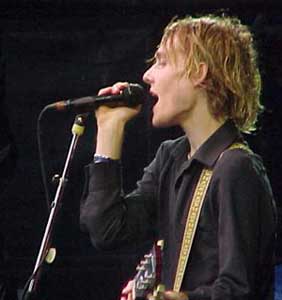 silverchair seriously rocked Edgefest! After suffering through a hellish day of rain, mud, cold, well over 35,000 crazy mother fuckers, and a brutal mosh pit we had finally made it to the performance we'd been waiting for, for months. It had rained steadily all day, but it started to pour onto the stage just as silverchair's equipment began to be brought on stage. It continued to pour for quite a while soaking everything and everyone. So the roadies removed some of their stuff and covered the rest up with plastic.

Some guy from 102.1 the Edge came on stage and told us that silverchair would be delayed, but he didn't say for how long or if there was even going to be a show. We were quite anxious and in some serious pain in the pit and weren't sure how much more we could take, but how could we not stay? After what seemed like an eternity the rain finally began to let up and the roadies started hauling the equipment back on stage and sweeping off the excess water. Finally we saw Daniel's guitars come out and we knew that silverchair was gonna play and that made us all very, very happy!

Once everything was ready the familiar "Are you talking to me?" came on and 35,000 people went INSANE. The chair took the stage and put on a fucking amazing show! They started with "Israel's Son" and got everyone jumping. The crowd had not been this active and wired all day, there were heaps of people that had been waiting just for this (us included). Next was a heavier version of "Emotion Sickness" that seemed to amaze all those who had never heard it before and even those who had. 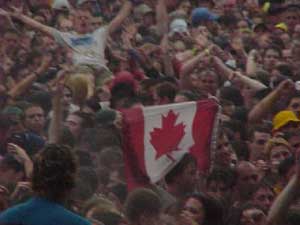 Daniel looked out at all us wet, disgusting mud people and smiled then said "Thanks everyone for waiting out here in the rain for us, we're here to save all your wet souls with some rock and roll." Then came "Abuse Me" which seriously rocked. We had never seen Daniel, Chris and Ben this interactive during a performance in a long time, they had so much energy and stage presence. Maybe it was the rain and the fact that so many people stayed around getting completely soaked, just to see them or maybe because there was just so god damned many people there they were inspired.

Daniel began talking again, "Isn't it a wonderful day for a summer festival? A time for love, love and mud...a time you all will never forget. Please don't throw mud on the stage, there are other bands that have to come up here and we don't want any fights. We don't like fights, we're scared of people. Actually we're scared of everyone." Then came a hardcore version of "Slave" that had everyone seriously rockin'.

Daniel kept yelling at us to "Fuckin' jump!" Followed by "thanks again for staying out in the rain to see us, you're all a bunch of punks." Then Daniel said "this is a song off our new album" and broke into "Ana's Song" which proved to be quite well received by the crowd. "Pure Massacre" was next and then Daniel said "maybe you'll recognize this one" and went into a shortened full band version of "Tomorrow" which broke off into a thrashin' heavy version of "Lie to me". Daniel was screaming his ass off the whole show, but especially during this song. 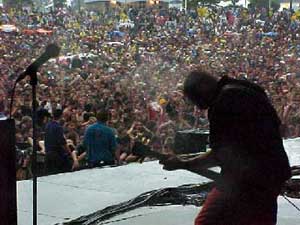 Before "The Door" Daniel did his trademark "Can I a get a hallelujah? Can I get a hallelujah? Can I get a halle-fuckin-lujah? You have to be louder so that my dying pet in Australia can hear you" so we gave him exactly what he wanted and he commanded us "jump you mother-fuckers!" After that he got us all chanting "We are the youth" and then started into "Anthem For The Year 2000" which was the highlight of the entire festival. Everyone cheered, jumped and went crazy and that's how the chair left us...satisfied in the rain!

Overall, this was one of the best shows we've ever seen silverchair perform live, we had never seen them so energized, powerful and impacting. Ben was all smiles from start to finish and he banged the living shit out of his drums. Chris was like a different person. He was thrashin' so hard and jumping in unison with Daniel, it was crazy. Daniel was more into this show than we've seen him in ages, it was good to experience silverchair in one of their peak performances. Daniel was all over the stage, headbanging with Chris, getting major feedback and getting wet with us. He was loud, vocal and screamed throughout the entire set adding much more rock to all the songs while his crazy hand gestures kept us all entertained.

It's hard to explain just how much they put into this show, it was by far the highlight of the day! Thanks silverchair for making us rock in the rain and putting a rockin' edge into Edgefest!