By ANNA FLYNN
All photos by KRISTI PAIGE 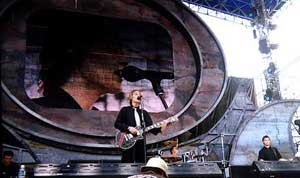 Can I get a hallelujah? silverchair was the one reason I went to Rockfest, and in my opinion, silverchair had more talent than any other band that played there. As silverchair took the stage, the crowd surged forward.

It was a completely different silverchair experience at Rockfest. For one, it was in a huge speedway, and secondly it was at one o'clock in the afternoon. silverchair was the fourth band to play, and the crowd was ready for them. They broke into Slave, and at first you couldn't hear Daniel's voice at all, but that problem was quickly solved.

They played about four songs before Daniel said anything to the crowd at all, but even then I couldn't really understand what he was saying. They stuck to the songs that everyone knew. The crowd sang along with Daniel during the full band version of Tomorrow and Freak.

They ended up playing only three new songs, Emotion Sickness, Ana's song, and Point of View. Emotion Sickness sounded really different both vocally and sound-wise. Ana's Song was the highlight for me, and it almost brought tears to my eyes. 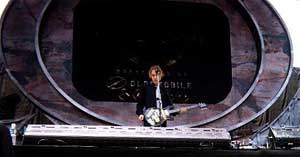 You could really hear Sam's keyboards. They added a slightly eerie note to some of the songs. Ben was so into his drums. It's really funny to watch his expressions. Between songs I think I made eye contact with Ben, but that might have only been wishful thinking. Chris prowled the stage and had this presence about him that you wouldn't want to mess with him. The crowd's energy really got the band going and helped them throughout the performance. Daniel unleashed some of his energy/anger towards the critics who were concerned about some of silverchair's songs. (That's partly why they didn't play Suicidal Dream) Daniel had some choice words for them, but then added that you can believe in whatever you want. He then redirected this energy into a heavy version of The Door. I can't speak for everyone, but I thoroughly enjoyed this concert. silverchair was the saving grace of Rockfest, and to that I can only say, Can I get a Hallelujah? 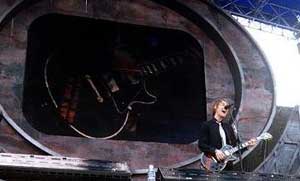 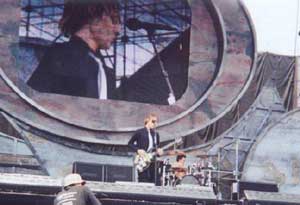