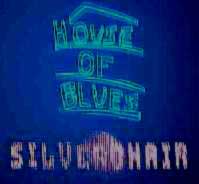 By SARAH WALL and HEIDI HALL

It was nearly 11 p.m. when the curtains opened on the stage at the House of Blues in Myrtle Beach and silverchair walked out slowly, picking up their instruments and getting ready. They dove right into Emotion Sickness, with Daniel's strong beautiful voice and lyrics, and the band's great talent. 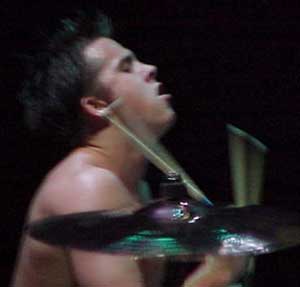 This song was played very powerfully and the crowd seemed to enjoy it. Some people not far behind me were even trying to mosh to it, but the bouncers flashed flashlights at them.

Next was Israel's Son. With Daniel's loud thrashing guitar struts, Ben's drum beats, and Chris pumping on the bass, this song was an old but great hit for us old silverchair fans, and it was wonderful to hear it live. I could listen to this song over and over. The crowd jumped a lot and crowd surfed.

The third song, Slave, came on and it was just as rocking as I thought it was going to be. During all of the hard rock songs, Daniel would come center stage right in front of us and he would do the guitar breaks between singing.

Abuse Me was played as well. It was one of the best versions of Abuse Me live that I've ever heard, besides on live webcasts and bootlegs.

Pure Massacre was also on the set list. There was a lot -- and I mean a LOT -- of jumping and crowd surfing during this song. Some people braved moshing, though I think it was prohibited because the bouncers were stopping them.

Ana's Song (Open Fire) came on. Daniel announced it as one of the new songs off of their latest album. He sang it very beautifully and Ben and Chris seemed to be very happy to be there. Chris was pounding away on his bass and slightly head-banging. I could see a little bit of Sam Holloway in the back far left behind Daniel. Ben and Sam would look at each other and talk or snicker during the song.

Suicidal Dream came on. Another old favorite and the crowd naturally went off on it positively. So many people were jumping. Everyone was sweating, it was so hot, but sometimes you could feel a breeze every ten minutes or so. The drums and bass were great on this song tonight. Daniel sang it just as perfect as he always has. It was beautiful! 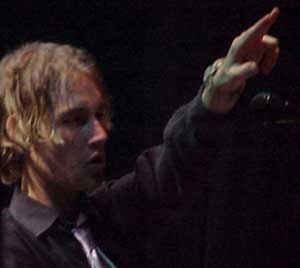 They played another new song off of Neon Ballroom, Point Of View. This one was one of my favorites. Daniel really had streched his voice on this song live to make it perfect as well as on the next song, Paint Pastel Princess -- another of my favorite songs from Neon Ballroom. I love the guitar and keyboard part almost at the end where everything sort of stops, but then they start playing the guitar and keyboard, and it just sounds really awesome live!

Next was Madman. The crowd went wild! Everyone was jumping, people were moshing, and crowd surfing... not caring as if they were going to be pulled out. It was great, except the fact that I kept getting smashed in the head everytime a crowd surfer got pulled out by a bouncer. Everyone had their hands in the air, holding the rock 'n' roll sign with their fingers and beating their fists with the sounds of the drums and guitar. Ben is the best drummer alive in the world, and Daniel kept making his way to the far left side stage or to the center in front of us to do the pounding guitar act throughout Madman.

After Tomorrow, Miss You Love was played. Ben, Chris and Sam re-entered the stage, and Ben was sporting a bra that was thrown up on stage. Miss You Love was also great live, but I felt like the sound was off a little bit. The drums and bass were higher in volume than Daniel's singing. Maybe it was just the stage, because it was so small. You could still hear Daniel singing, just not as loud as I would have wanted. At the end of the song, Ben whipped off his bra, and threw it to the person right in front of me. It was funny because that guy was really amazed by receiving the bra from Ben. 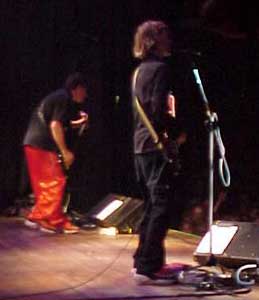 The next song was The Door, and almost the entire crowd was singing along. It was very rocking! And again everyone was jumping. Daniel thrashed on the guitar, and Ben stomped the drums with his sticks, Chris was slightly head-banging hovered over his bass, and Sam was looking down working on his keyboard from what I could see.

After The Door was Freak. Daniel started out the song by standing right in front of me at center stage by playing the guitar with his body sticking out leaning toward the audience at the edge of the stage, then when it was time for the vocals he moved towards the microphone.

Next song was Anthem For The Year 2000. Daniel made us start out singing. "We are the youth" about eight times in a row. Then we started singing the rest with him and I think he got upset because not enough people were singing, because he started shaking his head at us. But he went right ahead and blasted into the song. After Anthem came a short break, and the crowd chanted "silverchair" until they came back out for Satin Sheets. It was the big punk song of the night! The crowd was actively jumping again like before. It was played very well.

The last song of the night was No Association. The crowd enjoyed it very much, while jumping and everyone singing with their hands in the air. No one seemed to care that they were pressed agaisnt other people's sweaty bodies. Daniel sang it very distortedly like on the Freak Show album, and Ben was awesome on the drums just beating away. After the song was over Daniel took off his guitar and put it on the floor without saying a word and headed off stage. Chris, Ben and Sam left the stage as well with big smiles.

It was the best day of my entire life! Nothing surpasses this day! There will definintly be more silverchair concerts for me in the future, and hopefully I will be able to hang out with everyone again! It rocked!