"Where the hell's the Boathouse?" It was just about 4 p.m. and realizing we had just passed the venue for the second or third time Pete and I pulled into the gig's enterance. Wot a pleasant surprise this was as we met up with Shalonda, Jenna, Jack, and the very elusive Jarod. After a few minutes of talk, soundcheck began with Spawn Again (instrumental). Dan played around on the "bring on the ape farms... " part, delaying the notes on his guitar. Emotion Sickness was played next then cut off before Dan had the chance to scream "Get up, get up!" Short, but nice to hear nevertheless. 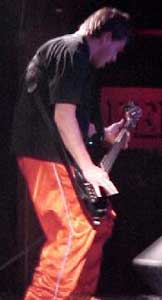 By this point the line had expanded and Heidi had joined our group's little circle. A little crowd had gathered behind us and the fuss was about the sightings of our beloved little blond boy Mr. Johns, and while the teenies were busy urinating all over themselves, Heidi felt it her duty to have a bit of fun at their expense (and who could blame her). Pete and I then met up with Dave Kahler and his ever-so-sweet mom and went to dinner.

Upon the time of re-arrival the doors had already opened and the opening band, Toque, took stage. Sam and Ben strolled out into the crowd unnoticed except by Jarod, Jack and Dave, who brought the event to my attention. Some of the crowd did seem to take to them, which may be a plus, then again some of the crowd took to the doors as well.

Toque's set ended at 8:45 and the crowd waited for silverchair to come on.

About 9:15 the three took their places on stage as the movie sound clip in the background was drowned out by the cheers of a 90 percent filled up Boathouse. The lights twitched as the venue erupted with the initial drawn-out notes of Emotion Sickness. The tempo quickly increased as the first verse began, and right off the bat I could hear the onlookers voices blend with Dan's to create an almost euphoric atmosphere. The song was magnificent despite very minor sound problems, and was finished with a staggering gesture and a few stumbles back.

The crowd quickly turned from melancholy to manic as Chris beat out the opening of Israel's Son, and the place lost all sense of sanity and humanity with the addition of Ben and Dan. Nobody hesitated to concur with Daniel's cries of "put your hands in the air."

Nor did the compliance stop when the song finished because Slave kicked in quickly. The crowd somehow managed to become more rampant and Ben's wood went flying -- I guarantee someone in the crowd ended up with a chunk of his stick because he was beating his cymbals so hard. 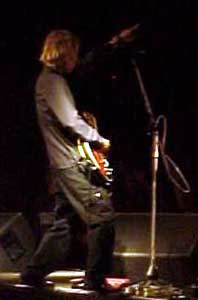 The crowd managed to become hushed for a full version of Abuse Me, again with immense crowd participation. Sam did a wonderful job filling in on keyboards, however I wonder how much better the song could get with Bailey playing guitar as well.

Pure Massacre got everyone moving again, and Dan wasn't reluctant to show off his vocal abilities by holding out the last note of the song for quite a good time span.

Ana's Song was next, followed by a crowd favorite Suicidal Dream and Point of View, which seemed to send chills up everyone's spine. I think the band particularly enjoys playing P.O.V. They definitely get into the song and the lighting by Hugh Taranto is amazing.

Paint Pastel Princess was played next, and unlike the Las Vegas show, everyone rang in once again. Near wot would be the solo of a traditional song Dan mouthed wot looked like we can do it, not to mention various "f words" (silly boy).

Dan joined Ben on the drum stage for Madman, although the highlight of this song was Chris flying in all directions punishing his bass for God knows wot, but it must have been bad 'cos he killed it.

At this time Ben and Chris took it upon themselves to leave Dan alone on the stage. Tomorrow was just as good as it was the first time I saw it done solo. Daniel made a few more changes than the first few times which shows how much he cares for the music he makes.

The rest of the band returned and they finished off the "light part of the set" with Miss You Love. After the song Dan had a few words for us: "Is everyone ready to praise the Lord? An Atlanta church thinks we're satanists, did anyone hear about that? No? Yeah? An Atlanta church wasn't happy about us playing a festival because we promote violence. That's what we do with our music, we promote violence, according to the church, so... the church is always right! So we promote violence, sorry. We're very sorry, all you people who listen to every word we say. Can I get a hallelujah? I said, can I get a hallelujah? Can I get a hallefuckinglujah? We wanna see every motherfucker move!" 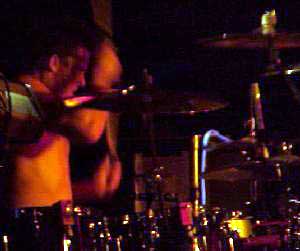 The Door stammered in brilliantly! Being one of my least favorite songs on Freak Show, it's odd how the song ends up easily one of my favorite to hear and see live, which just shows how much effort they put into their shows, and how much they love their audiences.

Freak was next, another crowd favorite, and it was made very obvious. Dan's earpiece monitor began falling off at the end of The Door and the problem wouldn't be fixed untill the encore came about. Trying to play through this problem is rather difficult yet Dan somehow managed to pull it off and the song was great. Instead of repeating "body and soul" several times Dan let the crowd sing it and he came in with the guitar on cue. This trend never settled either as the crowd was so loud singing "we are the youth, we'll take your fascism away, etc." that Dan didn't repeat "we are the youth" like he had in previous shows. After the song the band took a 2 minute break and came out encouraged by rants of "sil-ver-chair." We were rewarded by Daniel doing the Australian national anthem.

Satin Sheets was played with more enthusiasm than any other song in the whole set and like The Door is one of my least favorite album songs yet live is a necessity. In fact I think that it might be a better choice than Spawn Again.

The 'chair finished off the show with a rampant version of No Association which might not be as good an ending song as Israels Son, however it leaves everyone wanting more which is wot happened 'cos no one left until security started pushing us out the doors.

Norfolk was definately a much better show than any I've seen thus far. Despite the rundown venue and small technical problems, the audience atmosphere and enthusiasm of the band made up for it. I also wanna say hey to the lovely people I met that afternoon, you guys rawk, and thank Heidi and Shalonda for making sure the bus didnt run me over! Be sure to check chairpage for more times and dates when the Neon Ballroom tour will be near (or within some ridiculous distance from) you!