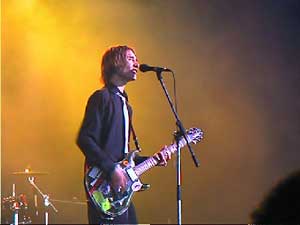 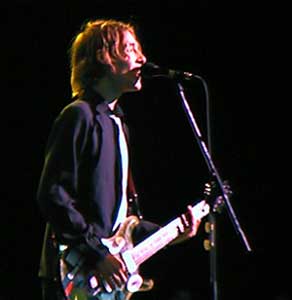 The Hartford sound was way better than the previous day in Boston, so it seemed. There had been DJs playing throughout each band's setup times in Boston, so the sound wasn't balanced correctly for many of the bands, but in Hartford it was just perfect.

No surprise, Orgy put on another wonderful show. What I didn't expect was the good show that Fuel put on. Before seeing them live in Hartford, I had basically dismissed them as a pop act, but they made a huge amount of new fans for some of their stage actions. The Meadows is set up much like the Tweeter Center in Boston, however there was no moshing area in front of the stage. Several people managed to pack into the isles though, but the security was intent on throwing out anyone who was trying to have fun. During one song the guitarist made pointing motions toward a kid that was being led out of the venue by security. Fuel then stopped playing altogether, and the singer beckoned for them to bring the kid back, saying that he was just trying to have fun. When they kept escorting the kid, the singer then called for him to come on stage, and I don't think the security was going to try and stop him at that point. With the 24,000 people in attendance booing harshly at you, it's kind of hard not to give in. Fuel furnished a leather padded seat for the guy on stage, and treated him to a towel and several hugs. They then replayed the song they had stopped, and the lucky fan was able to sing the last few choruses himself! A standing ovation was well-deserved. As I said above, Fuel made many new fans. 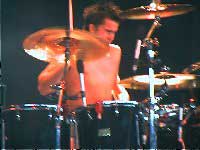 silverchair were next in line, and I was no less anticipating this show than the Boston one. This band is just so amazing that no matter how many times you see them, you are always amazed with every show.

They played the same set as in Boston, but stuck in Abuse Me right after Pure Massacre. Daniel's stage comments were entertaining as always. He went on at one point about how the people in the sun (in the lawn sections) were getting burned, and that if they were cats, that would mean they have eight more lives left, or something to that extent. Daniel babbles mindlessly all the time, but that's the best part about him. Honestly, not many bands chat with the crowd much at all. The familiar, "Do you believe in Jesus/Satan?" speech was relieving to hear as well. And, of course, what is a silverchair show without, "Can I get a hallelujah? Can I get a halle-fucking-lujah?"

All in all, a wonderful experience. I would definitely recommend silverchair for all!!! 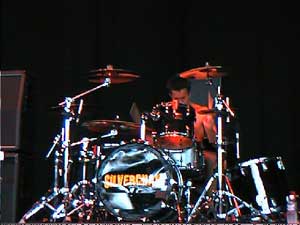