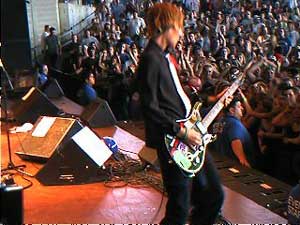 Report and photos by ZACK HILL 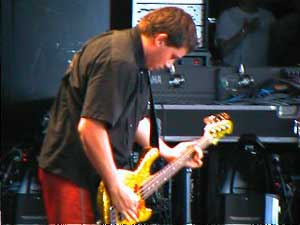 silverchair never fail to amaze me. Apparently the crowd at this show would agree with my statement. Their stage presence is certainly strong, as Daniel and Chris bound confidently about the stage, and Ben beats upon his drums with sheer force. The musical precision that the band has fine-tuned over the years is at peak levels. silverchair are most definitely "All this and more."

I was fortunate enough to be watching this show from stage-right, very near to where Daniel would be standing for the next 45 minutes. The ever-so-familiar Taxi Driver theme came blaring out of the house PA system. Cheers from the crowd filled the air when they caught the first glimpses of Daniel, Chris, and Ben heading onto the stage. Daniel came in my direction to retrieve his green PRS from guitar tech Bailey Holloway. You know, I love that guitar! On many occasions I have considered "borrowing" it from Daniel. 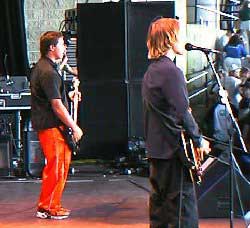 There they were, onstage, ready to go. They would launch into Slave merely a few seconds later. This was a classic opener--one they had not used much since the Freak Show tour. The wonderful thing was that this was a festival show, so the band was turned up to higher volume levels than they would be, had this been a normal small-venue show that they are used to. At least it seemed this way to me. It seems to make sense. Every note of the heavy intro just vibrated through my chest.

silverchair played a nice mixture of their old and new material, with Pure Massacre right after Slave. We even got a full-band rendition of Tomorrow, which was both surprising and nice. After either not playing it, or having Daniel solo, it was cool to hear the original song. I figure that Daniel playing it solo is just not festival material, and they probably wanted more people to recognize their singles and everything--to get more people into it.

My Neon Ballroom favorite, Point of View followed next, and I was very happy to again hear the song live. Sam adds in a quiet but nice touch on the keyboards during this track (and much of the show, actually) that makes the song(s) sound more full and gives sort of a more poppy feel to the songs. I hate to describe it like that, but I guess having the keyboards makes the songs seem more active. That may be a better description. 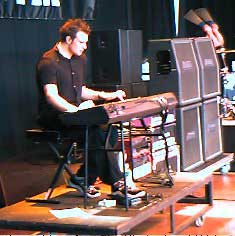 "Do any of you believe in shooting ducks?" Daniel would say to us after the guitar change. Some of the crowd cheered "yes!" loudly. He then went on to say that, "Anyone who answered yes is a fuckwit." He continued mumbling into the mic though that he understands that at a rock concert it's very possible that people are just yelling to hear themselves. I knew what was coming next, as he always tries to rile up the crowd before they launch into The Door. Wasting no time, "Do any of you believe in Jesus?" The crowd replied with a weak mixture of cheers and "No!" Daniel would then mumble, "Thirteen." And Daniel was then met with huge cheers when he asked, "Does anyone here believe in Satan?" His decision was made--"Twenty-six, Satan wins."

I was immensely impressed with the band's entire set. Freak and Anthem closed out the show, and the guys left the stage, Daniel taking a beach ball with him. After the show, John Watson commented that he thought the vocals for Tomorrow were exceptional, and I had to agree. It was the best version of it I have heard in a long time. The band seemed pretty into it. And so, there was River Rave in Mansfield. Onto Radio 104 Fest in Hartford!