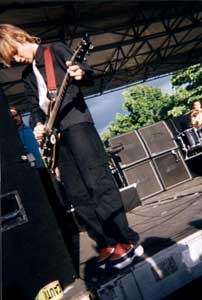 Even though silverchair's show was not to start until about 4:30, I arrived with my friend at India Point Park around 12:30. We were the first ones there so we immediately ran up to the front near the stage.

We were just waiting around until all of a sudden Ben came out on stage. We had a little chat with him until he went to go practice his drums. After that we just waited and waited until Dovetail Joint, the opening band, came on stage. Their music wasn't exactly the greatest and that's when I really started to get impatient. Well finally, after literally hours of waiting, silverchair took the stage.

They started off with "Emotion Sickness" and then went straight into "Israel's Son". They were absolutely amazing to watch, and it was incredible to see everyone in the crowded park get into it. At one point in the show, Daniel yelled something about how it was a beautiful day. Then he asked "Is it the first day of summer?" When everyone yelled no, he said, "Well guess what? It's the first day of summer here in Providence!" I guess you just had to be there because the way he said it was really funny.

silverchair continued and played songs like "Ana's Song", "Satin Sheets", "Suicidal Dream", "Pure Massacre", "Freak," "Paint Pastel Princess", Daniel played "Tomorrow" by himself, and I can't remember the rest. I think that it was after or before "Tomorrow" when Daniel was talking about violence and then he said something about violence with out pain. Then he said something like, "Oh except for the WWF where the wrestler died. Hey can we have a moment of silence for the wrestler? 1,2,3..." Everyone screamed so he then yelled, "Hey silence for the wrestler! 1,2,3...okay guys that was beautiful."

The whole time Chris was really into the music and jumping up and down. Ben seemed to be enjoying himself and kept looking at the huge crowd with this huge grin on his face. At one point he came out with a camera and told everyone to stick their hands in the air. It was pretty amazing that he could get the entire crowd to listen to him.

And then there was Daniel. He is absolutely amazing to watch. The whole time he was sticking his hands out and doing these weird hand movements, especially during the "We are the youth" part in "Anthem fFor The Year 2000". He was also talking to himself too. Hmmm.

The best part however was somewhere toward the end where Daniel said something along the lines of, "Who here like crocodile dundee? Who here likes Jesus...Who here likes Satan? Oh Satan got a stronger response than Jesus here in Providence...write that one down in the notebook guys." It was so funny.

As soon as they were finished they just ran off the stage although I can't say I blame them seeing how there were these psycho teenies in the front who kept on screaming "Daniel, Daniel, Daniel." Not to mention the idiot behind me who had a poster that said Daniel I want to have your baby! What a teeny! Well anyway, silverchair played an amazing show. It was my first silverchair concert so I was stunned the entire time. I was right up in the front so I got some great picture that I will send as soon as I get them. In the meantime, silverchair's performance was absolutely incredible and I can't wait to see them again on May 30th! If you've never seen silverchair live then you don't know what your missing.

I had been waiting since 1995 to see Silverchair live. With Neon Ballroom released only two months ago, a Providence radio station (WBRU) was set to kick off their annual Free Summer Concert Series held every year at India Point Park. Only two weeks before the first show, they announced Silverchair were booked.

The show was held outdoors at the beautiful India Point Park and began as early as 4:30 PM while the sun was still out. The weather was unbearably hot, and everyone was dying for Silverchair's first ever Providence appearance. The opening band, Dovetail Joint took the stage to warm up the crowd. Everybody was very enthusiastic on throwing bottles at the stage non stop. Not because the band wasn't good, they weren't bad, but the crowd made a game of it I suppose.

When Dovetail Joint finished, bottles were still being thrown as Silverchair's equipment was set up. One of the DJ's from WBRU came on stage and announced Silverchair were not coming on until bottles had stopped being thrown, and if they were thrown at all during Silverchair's set, the band was going to stop. Shortly after the announcement, as expected, the bottles stopped.

Set changes usually go for 30 minutes, it had been an hour and the crowd was getting anxious. People began surfing already as Filter's "Trip Like I Do" played through the PA more than 5 times and annoying the crowd.

Finally, after years of waiting for this moment, the Taxi Driver music played through the PA and the crowd erupted as Silverchair walked on stage one by one. Music is my life, it's everything to me, and although I appreciate it all, Silverchair just does something to my soul. So to see them right there after dreaming for this day, it was a magical experience.

They immediately burst into a jaw dropping performance of Emotion Sickness. This song is so powerful live. Alot of people in attendance were hearing a taste of Neon Ballroom for the first time, and some people even wondered (because of the haircuts as well) if this was really Silverchair. This definitley was a different band. A better, and more improved Silverchair to say the least. All of those who questioned if this was really Silverchair were silenced though when the opening bass line to Israel's Son filled the park packed with nearly 10,000 screaming fans. The pit erupted as crowd surfers tumbled everywhere from left to right.

Out came Daniel's green PRS guitar and we were taken back to a few more older songs as Silverchair ripped through Slave, Abuse Me, Pure Massacre. Next up was Ana's Song (Open Fire). This song had just been released as a single and was already becoming a big staple on the Providence/Boston radio airwaves. The crowd sang along as Daniel played a majority of the song with his eyes closed delivering a heartfelt rendition. Suicidal Dream followed next. Afterwards, Daniel stood alone on stage and played a solo rendition of Tomorrow. Daniel then gave his condolences to Owen Hart, a WWF wrestler who recently passed away. He asked for a moment of silence and got the entire crowd to be completely silent for a moment. I eveh remember briefly hearing the wind.

Ben returned to the stage with a video camera in hand to get a good shot of the 10,000+ in attendance before returning to his kit. Silverchair then busted into a ripping version of Madman, followed by one of my favorite tracks off Neon Ballroom, Paint Pastel Princess.

Daniel did a quick survery with the crowd asking if Providence loved Jesus or Satan. Satan got the biggest response I think. Daniel then did his routine "Hallelughia" speech with the crowd participating very loudly. On that note, the band went into The Door, followed by another Freak Show favorite, Freak. Next the sample noises began for Anthem For The Year 2000. The whole crowd jumped up and down in sync with the beat and cooperated really well with the "We Are The Youth" chant/clap along. After Anthem, the band walked immediately off stage.

Cheers of "Silverchair, Silverchair, Silverchair" roared through the now dust filled park. Daniel returned to the stage and said something along the lines of "Were headlining, of course there's going to be an encore". The crowd laughed and then Daniel began playing his native anthem, Advance Australia Fair. Ben and Chris returned to the stage at it's end and they launched into Satin Sheets which nearly turned the crowd upside down as chaos insued all around me. No Association closed out the show with the crowd still begging for more before they gave up and left the park.

Overall, this was an amazing show. The band played tight and recreated the songs from Neon Ballroom on stage better than I expected them to sound. The set was powerful and filled with highlights all around. It would have been better if the radio station had put the show over at Lupo's Heartbreak Hotel, which is a popular club in Providence that holds every national show that rolls into town. I thought the band would have sounded amazing through that sound system. If you haven't seen Silverchair yet, you have to if you ever have the oppurtunity. It's a show you will never forget.