Review and photos by TRACY 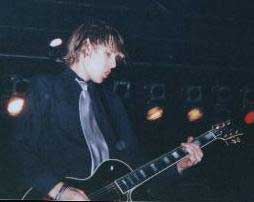 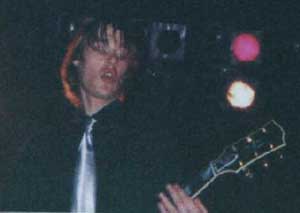 After waiting 3 years, I FINALLY got to go to a Silverchair show for the first time. We arrived around 7, the doors opened at 8:00, so there was a bit of a line. For being almost summer, it was pretty cold out! I stood in line for about an hour then they finally let us in. I walked in and the place looked empty, I was wondering why when I noticed there was another room off to the side. I walked in and took a spot on the left side up front. I was alone at this point because my friends decided it was too cold to wait in line. Anyway after waiting around an hour a band called The Pavers came on. They played all right but it wasn't my kind of music. For what seemed like forever they finished and left the stage.

About 30 minutes later the theme from "The Taxi Driver" came on and I knew it was time for silverchair. The crowd was yelling and getting all psyched. They came out and broke into an absolutely amazing version of "Emotion Sickness". From there they went right into "Israel's Son", which was also great. After a few songs Daniel spoke. He said something like "your hockey team is FUCKED!! He asked if anyone watched the WWF, some people cheered then he said ok, "feel free to wrestle here." It was pretty funny.

They played kick ass versions of "Slave" and "Pure Massacre" which are 2 of my favorite songs. After a bit more playing Daniel was asking us again if we believed in Jesus/Satan. He said something about people saying they like Satan because they heard Marilyn Manson say it, which I thought was hilarious. Plus in the middle of playing he said something about Janet Jackson and Busta Ryhmes in the hood, which got me laughing again. During most of the show Daniel was talking to himself which I have read he seems to do alot. I wonder what he was saying?

They played "Point of View", which I was surprised to hear comparing to past shows. Then Daniel broke into "Anthem", and he made the crowd do the "we are the youth" part. After "Anthem" they left the stage.

The show continued with "Dearest Helpless", which I was also surprised to hear, and "No Association" which was great. Then they left the stage and we immediately went outside and took a place next to the tour bus.

While waiting for silverchair, this guy came over to us with a video camera and started recording us asking what we thought of the show. After waiting awhile Daniel and Sam came out and immediately went onto the bus, and I didn't even notice! My friend had to tell me. Sam came out after a bit to sign some stuff it was funny because everyone was calling him Ben! I tried to inform them, but I don't think anyone listened. silverchair played a totally rocking show and I was so happy that I finally got to see them. I hope they come back soon!

Okay, this was my 13th time seeing silverchair, and although it wasn't my all-time favourite show, it was a pretty good one. The show was far from sold out and the lack of enthusiasm in the crowd may have been a reason why it didn't rock as hard as it should have.

When the doors opened I went in and grabbed a spot in the front row on the left side. The opening band, the Pavers, came on just before 9 and played a somewhat mediocre set in my opinion. I thought they sounded kinda like ALL mixed with Bad Religion, and later read a flyer that read "Pavers, ex-ALL," which explains why I thought that's what they sounded like. Their songs were fine but all sounded rather similar. After about 5 or 6 I wasn't into it anymore.

Anyway, eventually it was time for silverchair to play. I was very excited as usual to see them perform. The intro began and the band walked out on stage and jumped straight into Emotion Sickness followed directly by Israel's Son. The band played well but it didn't seem like they were too into it. Daniel remained silent as he broke into an amazing version of Slave and then Pure Massacre. It seemed like Daniel would never speak but eventually he said "Hey Buffalo. Your hockey team is fucked," which was recieved rather badly by the Buffalo crowd. He continued on though, and began to talk about the Toronto Maple Leafs (or "Leaves" as he called them) and how they had "kicked your asses." I don't like hockey much, but I am from Toronto so this got me cheering along with a few other Toronto people who were also in the front row. The rest of the crowd responded by throwing bottle caps and other assorted things at Daniel. I don't condone throwing things at bands but I'm pretty sure Daniel knew he would recieve a negative response. In fact I'm almost positive he mentioned it just to stir up the crowd a bit.

He continued to talk about Toronto throughout the show saying things like "Yay Toronto. Who loves Canada?" and more hockey related stuff, which made me forget that I was in Buffalo and not at home! He also later asked who believed in Jesus and who believed in Satan and told us that everyone always cheers for Satan because they want to look cool. Then he mentioned that he doesn't believe in "Bible crap" which also got me cheering.

The main set ended with an excellent version of Anthem, and the band left the stage, returning moments later for the encore. Before they began to play, Daniel mentioned that he knew that he was in Buffalo and not Toronto, and that he was just mentioning Toronto because they kicked Buffalo's ass or something like that, which insightedd more negative response from the crowd. As for the encore, I was very happy that they played Dearest Helpless, because I was interested in hearing how it sounded live. It was fabulous to say the least. I was hoping also to hear Do You Feel The Same that night because I'd heard that they played it once in Europe, but didn't get to. They closed with No Association and immediately left the stage. All in all it was a pretty good show, and Daniel's comments got me laughing pretty good throughout the night.