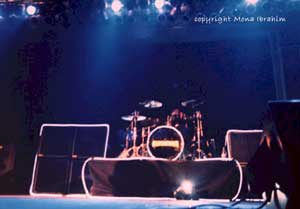 By Violet
Check out more of her photos!!!

Silverchair fans learned Tuesday night that silverchair, as musicians, aim to please. Not only did they manage to leave a crowd of all ages breath-taken, but by the end of the show, chants for more were still rising throughout the Newport Music Hall. 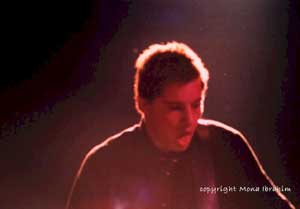 Newport is located in the heart of Columbus, a block away from Ohio State's campus. By 7 pm people were pouring into the double doors, getting their bags checked and tickets torn. The lights were low, only emphasizing the old feeling of theatre and drama that invaded the relatively small music hall.

As you walk in, the smell of nag chamba and cigarette smoke filters through your skin and hair. You look about to find the hall packed mostly with kids 14-19. However, there were enough adults there to make you realize that silverchair isn't for kids anymore.

The lights came down at a little after 8 to allow a performance from a local band called "Superstar Rookie". It's strange to hear a moderately punkish band open for silverchair, but then again, it takes all kinds. Ironically, the lead singer of Superstar Rookie claimed to despise silverchair in the past. However, after the phenomenal performance of the main act, perhaps he changed his mind. 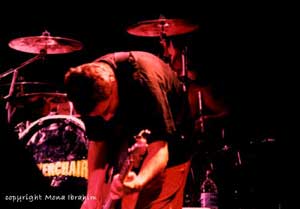 The lights grow dim again around nine, after the stage is thoroughly decorated with neon threads of color and light. Everyone's impressed by the setup... It encourages imagination, and truly represents the newest release by the band. As they walk on stage, the crowd roars to life. They take up their instruments, and break into the heart-wrenching "Emotion Sickness". They work through their first three songs with passion and without comment, before Daniel finally speaks into the microphone. He's hard to understand, but he says at the end of his small speech "Everyone continue to Rock, and we'll continue to provide the rock."

The show runs as one might expect it to, with random interludes pertaining to butts from Daniel and the purest rock you've ever heard. There are many highlights to the evening, including Daniel's desperate attempt to silence the crowd. "We're going to play a game. All right, on the count of three, I want everyone to just be quiet." Surprisingly, his first attempt is successful (with the exception of the "fuckwit jock" in the back... Isn't there always at least one?), though his second only encourages the crowd to cheer. He gives his Tool-esque Hallelujah speech, adding "Do you believe in the spirit of Rock and Roll?" to the god/satan questioning statement, then pounded into the Door... Which suddenly sends the crowd into ravenous thrashing and pounding. 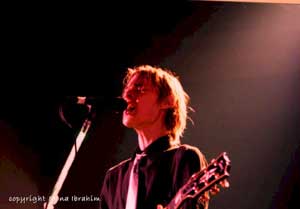 Their last song before the encore is Anthem for the Year 2000, and Daniel continues his tradition of shouting "We are the Youth!" to the crowd. Everyone becomes involved, including the adults still posting out the sides and back of the venue. As the song wraps up and the stage becomes dark, the crowd chants "silverchair", still craving more.

The encore performance is the best yet... Satin Sheets comes first, followed by a ripping performance of "No Association". Daniel's voice almost falters, but still holds strong as he walks to the front of the stage and thrashes his guitar as much as the strings could take.

As you slip out of the venue and head towards the back in hopes of catching a glimpse of the boys before they head onto their next destination, you realize that the smell of nag champa and cigarettes will probably remain in your hair for days. The bruises from the pit may last a week or so. But the sight and sound of such an amazing band will leave a scorched impression in your memory forever.

I woke up at 4am too excited to sleep cause today was the day I was to see silverchair live. It had been 2 years since I last saw them. I was supposed to leave my house at like 7am but didn't leave until around 8am and my friend who was going wasn't even ready then so I picked up my boyfriend first and did some errands than picked her up. We finally got on the road at around noon. We played the Live album, Neon Ballroom, and the Anthem single on the way up. We were rocking to London's Burning and people in cars beside us were giving us strange looks but we didn't care cause we were on our way to see silverchair. Anyway it took us 3hrs to get there and when we got to the city part of Columbus I was so excited.

At around 8:15pm the opening band came out. They were a local band called Superstar Rookie. I didn't really like them, and a lot of people were just standing around not doing anything. A lot of people were just anxious to see silverchair and so when the lead singer said, "this is our last song" everybody cheered and hollered. The only song I liked that they played was a song I call the Ren and Stimpy song cause all it was about was happy happy joy joy.

After they left the stage the roadies came out and cleared their equipment and at around 9:30pm silverchair come out and the crowd went crazy. They started out with Emotion Sickness, which was so awesome, and everybody was singing to it. Daniel sang with so much emotion that it was thrilling just to be there hearing it live. They then kicked into Israel's Son, which was very cool cause everybody was singing to it, and putting their hands in the air as Daniel told them too. Periodically Daniel would say "Thanks, you guys are cool" and right before they played Point Of View he said "If you guys don't like this one then we are going to go home very disappointed." But everyone loved it of course.

The stage got kind of dark and Ben and Chris left so I knew it was going to be Tomorrow solo that I had been hearing so much about. Daniel said "This is a very old song that we are sick of playing together so I am going to do it by myself." It was so cool, it sounded so good and he didn't even have to sing cause everybody was singing it for him.

At some point Daniel said, "ok we are going to try and play this game we tried in Europe. On the count of 3 you have to be as quiet as you can and nobody can make a sound. If you are quiet then everybody gets a hundred dollars. Just come around back and we will give you a hundred dollars, but you have to be quiet. Are you ready? OK, 1-2-3." For the most part we were quiet, but there were a few who made noises on purpose. Then Daniel said, "That was good, that was very good except for that one jock back there. Let's try it again. OK, 1-2-3." This time more people made noises and Daniel said "No no, that's wrong, you were better the first time, let's try it again. OK, 1-2-3." This time a lot of people made noises and Daniel just went off on them he said "You fucking jock, you fuckwit! Ben has his sights on you and when you get Ben mad he gets violent." It was funny.

They rocked so hard! It was so awesome, and for the encore they came out and Daniel started playing the Australian National Anthem which I thought was cool. Then they played Satin Sheets and No Association. When they played Suicidal Dream, Daniel was conducting us 'cause everybody was singing it.

Anyway after the show we bought T-shirts and I went to my car and got my camera and came back to the bus to wait. We waited forever and then it started pouring the rain so a bunch of people left but not us.

Finally close to midnight Ben gets on the bus and the guard said that if we don't act idiotic that they would sign autographs and stuff and to form two lines so we did and then Ben comes off and signs stuff and takes pictures. Me and my friend got him to sign our ticket stubs and we got our pic taken with him. He even remembered us from the front row. He said, "You are the two girls who were drumming in front right? Is that right?" I shook my head yes and my friend said "yeah" and then he said "Yeah I remember you two, I saw you two." That was so awesome he saw us acting Stupid, but I don't care cause I was having fun. While he was signing stuff Daniel snuck on the bus. They were using Ben as a diversion, which worked very well cause few people knew Daniel had gotten on the bus.

Overall the band rocked. This show was 20 times better than the one I saw of them in Cincy, OH 2 yrs. ago. This time around they seemed more happy and Daniel seemed to be in a better mood cause he was talking and stuff. I loved it, they are an awesome band and if you ever get the chance to see them live, do so 'cause you will not be disappointed. I hope they come back soon cause I can't wait to see them again.