My friend Miguel and I arrived at the New World Music Theater at 12:00 PM, just when the gates were supposed to open. Before going in the Theater we encountered a little problem...Not knowing we weren't suppose to have chains the inspector told me to put my chains in the car, but my ride left, so I just stuffed it in my coat pocket, and fortunately they let me in, without noticing. We were in for a long day of bands, sun, and snacks. 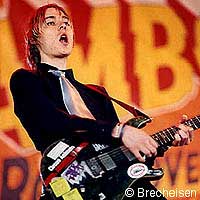 Finally at 4:30 Silverchair comes on. We left Lit 10 minutes before to get to see Silverchair. I went to my seat, and when they came out, the whole theatre went nuts. They started off with "Freak" from what I remember and that song kicked some major ass. Then it was "Slave". I don't know the order of these songs but it was "Israel's Son", "Ana's Song (Open Fire) , those two songs were the best. I felt like forming a mosh/bodysurf in the middle of the aisles...I love it when I hear the intro/bass to "Israel's Son".

Other songs they played that I really enjoyed were "Suicidal Dream", which is such a sad song with so much meaning, I LOVED IT! In the middle of performance, I really couldn't make out what Daniel was saying, but from what I heard he said "We love Jesse Jackson"..or something to that extent. Then their was about 15 minutes left and silverchair finished off with "The Door", "Point of view", "Pure Massacre" another wonderful song

Then they played their hit single from Neon Ballroom, "Anthem For The Year 2000". It was fun because when Daniel started to sing the intro "We are the youth..we'll take your fascism away". He made everyone in the crowd say "We are the youth" really freakin' loud until we perfected it. It took about 10 times, but hell that was okay. When the chorus came "We'll make it up for you in the year 2000, with you" Daniel said "Get the fuck up Chicago", and I just was standing on my seat, and jumping, and going crazy.

During Offspring I just ripped my shirt in half that said "DANIEL JOHNS IS GOD" on it. The night came to a close with The Red Hot Chili Peppers, who where excellent. I purchased a Neom Ballroom tour shirt, a little expensive but it was worth every penny. It took a while for the Red Hot Chilli Peppers because after Offspring, everybody started throwing their plastic cups, and plates, and it took a good 45 minute wait to clean everything up.

All in all this festival called Jamboree 99 sponsored by our local rock/alternative radio station Q101 was a rock ass fuckin' show! So far so good 2/2 for silverchair and seeing them in Chicago. I'm pretty sure they will come back one more, maybe even two more times before the year comes to a close. Thanks for the bitchin' show at Jamboree 99 silverchair.

This was the second time I saw silverchair this year and their show was disappointing. Seeing them at a festival has its pro's and con's. The cool thing was my seats were in the third row so I got to see the band members perform really up close. Daniel spit frequenlty throughout the set..but I'll get back to their stage performance later. What was disappointing was the band played in the afternoon and a lot of the crowd wasn't into the show. All the people around me were just sitting down watching the band, I was the only one standing. silverchair were basically a warm up band and the crowd really got into it when Hole, Offspring, and the Red Hot Chili Peppers played.

All of Daniel's stage lines and actions seemed like a script. While musically he played an excellent show, Daniel really didn't communicate with the crowd well. He just sort of blankly looked at everyone and gave no special recongnization to people close to the stage who were really gettig into the music and jumping around and believe me they did stand out. Daniel stared way back at the people who were in the lawn seats and asked why they were so far away. Then he shrugged it off and said"I understand how corporations and industry works...We're from a place where there is a lot of industry, it's in Australia and we're from a town called Newcastle"

He also made a few comments about Chicago, saying "hello Chicago" and stuff like that. Then the only time he really enthusiastically spoke to the crowd was when he went to the very front edge of the stage and screamed, "Do you believe in Jesus, do you believe in Jesus....do you believe in Satan..can a have a hallejuah? can i have a fucking hallejuh..." a lot of the audience was unaware that this is Daniel's usual stage discussions and seemed a bit startled. That is why I think his performance is too scripted, he could have done something orginal or at least communicated with the crowd better.

The band finished with Anthem and played it exaclty how they did on Letterman. Then they all just turned and quickly left the stage without saying goodbye or looking at the crowd. The band were suppose to do a 6 pm signing at the festival but cancelled. There were many silverchair fans who had flowers and were very anxious to see the band. Some girls were even crying because they were so disappointed that the band cancelled.

Hopefully next time around if silverchair ever play another festival, they'll be more popular and will play in the evening when the crowd is more into the shows. Also, the show could have been better if it had stage effects like the other bands, even those that played before them had. It would have added some spice into the set.