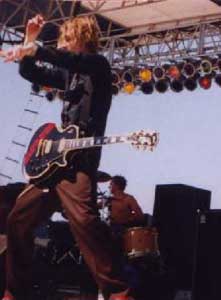 By AMANDA and LAURA

Who would've guessed that on April 30, 1999, Amanda would fly all the way from Dover, Ohio down to Ft. Lauderdale to meet up with Laura. After being friends online for almost 4 years without ever meeting each other, Amanda could not pass up the opportunity to fly down to Florida, meet Laura and take a road trip to Zephyrhills to see the band together.

We headed up to Zephryhills, about 20 miles northeast of Tampa, (a 4-5 hour drive from Ft. Lauderdale) and got a hotel in Tampa Saturday night. After some serious partying on Tampa's famous 7th street, we crashed and got as much rest as possible before the show the next day. We drove the half-hour away to Zephyrhills, and we were immediately shocked to see this area holding the 2 day festival, Livestock, headlined by silverchair. The entire city is essentially in the middle of no where, and not your typical silverchair crowd. 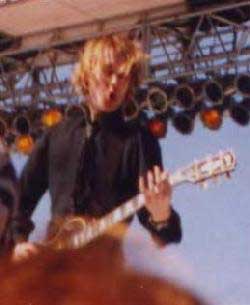 When we arrived Sponge was onstage, and we cased out the joint during their set...Next up on the main stage was Kid Rock. While we were watching him perform, we met a guy named Mike who was kind enough to use his all-access passes to get us both backstage. We went into a barn area backstage to get some water, when we found Ben and Sam being interviewed. We waited until the interview was over, and approached Ben for a picture with the both of us. We posed for 2 pictures and talked to him for a bit until he had to hurry and get ready to play. We saw Chris quickly in passing, and Daniel was no where to be found until show time.

We headed over to the area behind the stage to watch the band begin as they opened with Israel's Son. This song immediately got the crowd pumped, as they then followed right into Emotion Sickness, that had an incredible energy different from the album version, though no less amazing. Following Emotion Sickness, the band onstage and the field full of people went crazy during Slave, and Ben was beating the hell out of his drums. After Slave they led right into Pure Massacre, which got a huge response from the crowd. It was great to hear a song from Frogstomp that sounded better than ever, and Daniel's voice sounded great. Abuse Me was next, which was an obvious crowd favorite, as everyone sang along.

Daniel urged the crowd to move by saying "YOU BETTER FUCKING JUMP!" which got the crowd into the song. He sang Abuse Me with even more feeling than before, and hitting higher ranges with his voice. Next was Ana's Song, that really was incredible live. Daniel's voice was perfect. After Ana's Song, Daniel went right into Suicidal Dream, and along with the opening of the song, the crowd responded, recognizing the familiar Frogstomp favorite. 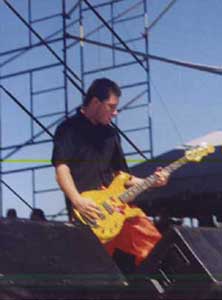 Although the crowd seemed really into the band, they weren't moving much, so Daniel started his usual "Can I get a Hallelujah?" following "Let's hear it for Jesus! Let's hear it for Satan! Let's hear it for sex, drugs, and fucking rock 'n roll!" to get the crowd pumped. We knew it was time for The Door, and Daniel began telling the crowd that the band had thought that Tampa didn't know how to rock, but that it turned out that this has been one of their best shows ever. Daniel then said that we better fucking move or he's going to stop playing. After Daniel's speech, the crowd went crazy during The Door, and the band seemed pleased with the response.

To keep the crowd in the rocking mood, Madman was next, and Daniel and Chris were all over the stage, going crazy along with everyone under the hot sun in the crowd. After Madman, they next played one of our new faves from Neon Ballroom, Paint Pastel Princess, and Sam Holloway's keyboarding added to the song, making it sound awesome. Again, Daniel's voice was at its best. Yet without a break, the band went right into Freak, which got the crowd really excited after many were not too familiar with Paint Pastel Princess. Freak sounded better than ever before, and Daniel even added "If only I could be as cool as all of fucking you!" pointing to the crowd, which got a huge response as Daniel continued to interact with the audience and get us into the show.

As their set was coming to a close, Daniel started the intro to No Association, but played it differently than on the album, and it threw the crowd off. But when Daniel sang the first line, the crowd was right back into it, jumping as Daniel screamed out the lyrics with a new intensity.

We had an excellent view of Ben from behind the stage the entire show, who was banging the shit out of his drums to every beat of No Association, clearly one of the band's faves. Without a pause, they went right into their last song, the anticipated Anthem for the Year 2000, a song that the whole crowd seemed to be waiting for. Daniel screamed "WE ARE THE YOUTH" over and over with his arms and middle fingers in the air, prompting the crowd to join along. This song was an excellent close to the show, and left everyone wanting more from silverchair. 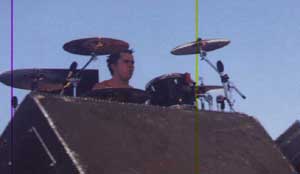 The entire 2-day festival came to an end with their set, and everyone seemed blown away by the band. Right when Anthem was over, the band quickly hurried off stage as everyone crowded around the steps backstage to catch a glimpse of the band exiting the stage. Daniel seemed confused as where to go, and we saw him mouth to Chris "where the fuck do we go?" All of the sudden, a gray van pulled up right to the steps, and Dan, Chris, Sam, and Ben flew down the steps and into the van. As many crazy fans chased after the van, it quickly drove off out of view.

Although Amanda had seen silverchair just a little over a month ago in Cleveland, Laura had not seen the band in over 2 years, and we were both amazed in how much they have matured, and Laura was particularly impressed with how well Daniel's voice sounded. Daniel seemed much more comfortable talking to the crowd, and getting everyone into the show. They played an amazing set that never missed a beat and each song continued to sound better than ever before. We were both surprised they played many songs from Frogstomp, that had a new, enthusiastic sound, and many of the new songs had a new twist live that made them incredible.

Even though Amanda flew over 1,000 miles to meet Laura and see the band, and together we drove another 5 hours to get to Zephyrhills, we knew we wouldn't be disappointed, and we were right.