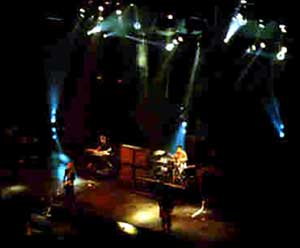 By BEN MATTHEWS of KID ZERO

silverchair put on a great show on April 30th at London's Brixton Academy. Support bands Fuel 238 and The Living End got the crowd started and had the mosh pit in a frenzy even before silverchair came out.

The sounds of Bobby De Niro in Taxi Driver blasted out of the loud speakers and the crowd went insane. The neon lights around the drums and amps looked cool. The guys opened with Emotion Sickness and then went straight into Israel's Son which encited a major mosh down in the pit. Ben was wearing as usual his shorts and Chris in his orange jeans and blue polo shirt and Daniel wore his black trousers and shirt with a silver tie.

The band were on fire tonight and Daniel seemed to really enjoy playing the new songs. Israel's Son and Slave sounded a lot slower than on record as did Freak and Madman.

During The Door, Daniel stopped playing guitar and shouted "Sam Holloway!" and let Sam have a solo on the keys. It was cool.

After Point of View, Daniel introduced the silverchair road crew and gave them all nicknames relating to the circus and llamas. Ben and Chris improvised a cheesy background rhythm after every person was introduced -- kind of like a drum roll but played on the toms. It was a great show and a great venue. Next stop, Leeds 99 Festival U.K.!!!

Well, here we go again. After what was a thoroughly exhausting night, what with all the travelling up to London and seeing silverchair, we now find ourselves in the heart of Brixton. Totally squeezed to the brim with as many policemen that it can possibly hold. This is due to the bombings of late, and just like London yesterday, the slightest sniff of any crime concerning a bag and you will be jumped on by around 100 of her majesty's finest, but enough of that we are here to rock.

Arriving at the academy at around 7:00pm the queue stretched for miles around the venue and we hastily found some friends of ours and barged into the queue, much better. Upon getting through the doors I am hastily stopped by a 7 foot huge brick house of a security that informs me that my chain is a lethal weapon and it is illegal, and you can hurt people, blah, blah etc. I had to tell him my name and hastily rearrange my wardrobe and wallet before he let me in and then searched me. Surprising considering that my friend in front of me, who got through without a hitch may I add, was wearing a chain which would have no problems holding down a circus elephant, oh well.

Again we got into the gig and hung around at the top, then at about 7:30pm Fuel was the first band on, quite surprising really, as they were the second support band last night. The didn't rock as much as the previous night, and again, the first support bands don't really get me or many other people going that early on. They still were good though, pumping out most of their debut album Sunburn, such tunes, as Shimmer, Bittersweet and the Helmet-sounding Ozone and Mary Pretends.

Next band on were an Australian band called The Living End, by this time me and my huge group of friends were all ready to get up and do a bit of moshing. We were surprised to see the bassist walk out with a big mother of a double bass and swing it around like God knows what. The singer was kinda punky looking and played what looked like a Gretsch guitar.

They had huge stage presence and when some heckler started giving them shit by the last song, they soon made him out to look quite silly. The finale to their really upbeat seat was the double bass player actually standing on his instrument, how cool was that?

The stage was then cleared and Bailey Holloway rushed on putting water next to Sam's keyboard and putting towels around in all the bands places. He brought out the guitars that had been giving Daniel a headache from last night and was continually checking them, he looked as though they were having problems again, oh no we all thought to ourselves.

The Brixton Academy is renowned for it's excellent PA and it's lighting rig which had been recently updated, it looked amazing, so even before the gig we were sure it would turn out fine, but the guitar bit did worry us.

The lights went down and the familiar Taxi Driver intro was played, the band came on and again launched into Emotion Sickness. This was a much better version than the night before and had a bit more effort put in, but again it was too slow a tempo and didn't really sound good that slow, especially as an opening song. Don't get me wrong it's my favourite song that's why I was a bit angry at the sound of it, I just think the band was tired in general, especially Daniel who looked really fatigued. Next song again was Israel's Son, which was amazing, really good with some extra screaming and added bits from the band.

During the set Daniel came out alone and said that he hadn't played this for a while and he might fuck it up, but he said that was just him. He then started to play a beautiful version of Cemetery, it was something I hadn't heard for a while and was a brilliant surprise.

One by one the songs kept on coming Slave, Abuse Me, Pure Massacre, Ana's Song (Open Fire) and another one which I wanted to hear live again Point Of View, again me being sad looking at how he played it.

Before the start of The Door, Daniel started going into one about giving a cheer to people. He mentioned just about everyone in the venue I think (just kidding), but he said stuff like "let's have a cheer, for John Watson Management, let's have a cheer for Same Holloway", and Ben and Chris did this little rolling drum beat and bass line, it was really cool, a bit outstretched but was seriously funny. He then launched into the can I have a hallelujah part before he started off The Door.

Freak and the Anthem for the Year 2000 followed next and I think it was somewhere in between here that Daniel said something like that's two nights in a row where my guitar has fucked up, and he started looking over to Bailey and shouting stuff at him, poor Bailey.

They went off and then all the lights went down. This was the part where Daniel returned to do the Tomorrow solo.

It was quite a good version and the crowd sung along on many parts where Daniel stayed silent.

Ben and Chris returned and then the greatest surprise ever was in store, they started to play Dearest Helpless.

Here is one song that I was desperate to hear, along with Steam Will Rise live, and they were starting to play it.

I don't know whether it was supposed to be on the set, but Daniel started playing the intro for ages and Ben was looking at Daniel a little bemused, but sure enough the professional quality of the band shone through and they all launched into the song. It was absolutely amazing the drums sounded brilliant, so hard and heavy sounding.

After that Daniel thanked the crowd and changed his guitar, we thought it would either be No Association or Spawn Again, they then had the amps screeching and we knew it was Spawn Again. This has to be the heaviest and best version I have ever heard the crowd just went mental. Alas around three minutes later, and many bruises and punches to the face the sound of glass crashing signalled the end of silverchair in Brixton. I looked up from my battered self and just managed to catch a glimpse of the band leave the stage. That was it, nothing more, the lights went on and the crowd started to move out. That was the last time I thought I would ever see them this year, thank God, I got reminded about Reading 99.