Photos by LAUREN and LAURE

Again, it was time to head on up to London to see the delights of a two-day silverchair fest (Astoria & Brixton). 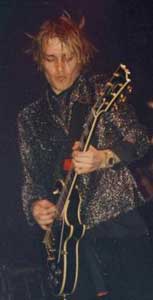 We made our way up all packed into the back of a work van, all 5 of us bundled together.

We got to the Astoria for about 6:30pm where we got to the queue and found that it stretched all the way around the Astoria theatre, and then some. The queue started to move at about 7:00pm when the doors where due to be opened.

On the way up to the doors we heard a police siren and noticed a police van was speeding down the side of the road.

They stopped right next to us and thought it was to do with the queue, but one person handing out flyers had left his bag on the other side of the road. The policeman jumped out of the van and started inspecting it only to find it full of some persons flyers, a few expletives were made by the policeman to a cowering flyer man, and then they jumped back in the van sirens wailing. We all thought it was another bomb and so did the police by the quickness of it all, security is very tight in London, with all the bombings.

We got into the theatre and hung around at the bar for a bit. Very quickly the lights went down and the first support band was up. They were called Fungus. They were ok, nothing really catchy, I think people had only just got in and were still sorting out bags, drink and T-shirts etc to wanna go down as there wasn't that many people moshing to them.

I thought they sounded pretty poor and were not good, only in my opinion though.

Once Fungus was finished, there was a little gap and then Fuel came on, what can I say, I thought they totally rocked. I borrowed their album a few days earlier and the songs sounded perfect to the CD; they were tight, loud, heavy. One of the best opening bands I have ever seen, I suggest you check them out if you can, if only for the heaviness of 'Ozone' and 'Mary Pretends'.

Once Fuel had finished the silverchair road crew started to scramble on and set up the bands gear. I noticed that Daniel's neon Mic was now being placed centre stage in between Sam and Ben. This was different to usual as Daniel usually has stage right; we all had to reposition ourselves, especially as I was looking to see how to play Emotion Sickness (sad I know). Finally the lights went down and all the neon strips lit up. The music faded and then the opening music came on (The Taxi Driver, You Talking To Me?). 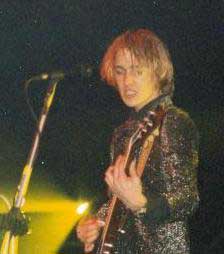 The guys all came out and took their respective places and started playing 'Emotion Sickness', what can I say, apart from what a disappointment. The sound was just really bassy and the tempo was way too slow. You couldn't hear Ben's snare very well either. This was really upsetting for me, as the last time I saw them they were nigh on perfect. I don't know what happened but I could see a few people looking around a bit bemused by it.

It was especially upsetting, as it was the one song I was looking forward to hearing the most, as in my favourite song.

Next up was Israel's son which was a lot better, that started to get the crowd rocking, and the sound seemed to be a bit better by the next song. During the first half of the set I noticed that the sound kept getting distorted and out of tune.

I could see really clearly the anger on Daniel's face and I could clearly see him keep bashing the tone switches, tugging at the lead and stamping on the foot switches. I could also see him mouth "fuck, fuck", quite a few times.

He then shouted over to Bailey Holloway that it was something wrong with the foot switch.

Bailey Holloway rushed out and started fumbling about around Dan's foot switches and briefly the guitar came back to life.

It was subsequent songs after this that you could hear the guitar play fine, then conk out, and then back again.

Also during some songs I think 'Ana's Song (Open Fire) the clean part at the start was slightly ruined due to the guitar sound, Daniel looked severely pissed off. 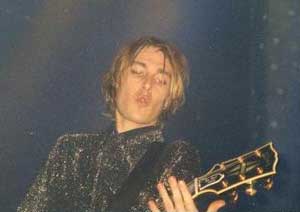 To top this all off someone in the crowd kept shouting out that Daniel was a fucking wanker, and you could clearly hear him during breaks between songs. Daniel said "who keeps calling me a fucking wanker, suck my fucking dick", which got a good round of applause, while all the kids started pointing at the kid responsible. He also kept reminding us how much he loved London, and before The Door he done his usual "can I get a hallelujah?, can I get a halle-fucking-lujah?"

He then started to say that we were useless and that the Germans did better and they didn't even know what I was saying.

This prompted us all to scream very loud, to which The Door started with a big shout of "jump" from Daniel.

This was also one of the first concerts where I could really see Ben and Sam properly, whereas before Ben was too far back and Sam was hidden too far off the stage behind Daniel's amps basically. The way Ben and Sam reacted off of each other was really nice to see, and Ben's drumming was absolutely amazing. His rhythm is spot on, but again it was let down by the poor sound, PA possibly although Astoria never really had bad sound, I just figure it was one of those nights.

A song that the played which I hadn't heard before was Point Of View. I was really keen to hear this love, and also again being a guitarist seeing how it was played. The new tunings for the album are all really confusing so I had to look hard especially when he played this song, although he played it on the E tuned orange PRS. 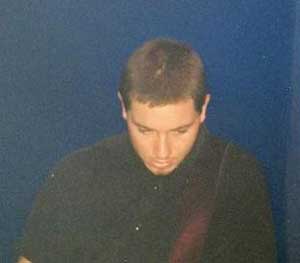 Silverchair launched through loads more of their catalogue of music from Freak, to Madman and then finally to Anthem For The Year 2000. Daniel's guitar was again playing up and I could see him shouting to I guess it was Bailey that it was being funny. Once the song had finished Daniel basically threw down his guitar and sort of flung his arms around to say like go away, he didn't seem pleased.

After about 3 or 4 minutes they returned and Daniel didn't seem unhappy at all.

He explained that they now had full guitar power. They then launched into Satin Sheets, which was another new song I was keen to hear. After that the new intro to No Association was played. It rocked seriously with loads of added or improvised bits put out by the band. Then as the last chord struck the lights went down, silverchair were gone. A brilliant concert still, but the sound problems were just so annoying, especially I can imagine for silverchair. It was just frustrating to know that they sound so much better, but was let down in the end by problems which were out of their hands.

I'm willing to bet everything that Brixton tomorrow will be one of the best gigs ever.