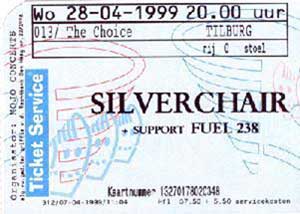 Finally the great day was here. silverchair came to play live here in Holland. At 7 o'clock "013" opened its doors and a crowd of 2000 entered. In other words, the room was sold out. At 8 o'clock the first band began playing. The name has slipped my mind and if I may be honest, I don't care at all. What a total Green Day-rip off (and we know Green Day wasn't that original.)!!!!! But at least Green Day has some good songs and this band didn't have any. Oh yeah, a cover of Soft Cell's "Tainted Love"…They only played loud and they blew up an amplifier. Ok, the bass-player played a standing base and that's the only thing that was worth mentioning.

At 9 o'clock Fuel 238 began playing and that sounded good, but maybe a more characteristic sound would be nice. I thought the Pearl Jam-Alice in Chains-Nirvana path was already walked by Matchbox 20, Creed and the Stone Temple Pilots.

Finally, 9:45, a spoken intro filled the room, gradually accumulating into a fantastic version of "Emotion Sickness." From that moment on the band played with such a great enthusiasm and fire, that the world was forgotten for 1.5 hours and the only thing that mattered was the show. The audience was captivated by the charisma of Daniel and followed everything he asked us to do or sing. 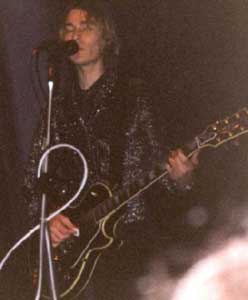 Ben and Chris placed the steady base in which Daniel could perform his sometimes capricious way of playing. Assisted by one keyboard player the songs of "Neon Ballroom" worked out very well, even though there are a lot of difficult orchestral parts on the album.

Even the songs of "Frogstomp" and "Freak Show" were played like it was the first time and a special mention applies to the fantastic solo-performance of "Tomorrow" by Daniel. Impressions enough, enough to fill a new homepage, but I don't think I'm gonna try that. Ok, the shoes Daniel was wearing. It were the strange colourful ones he also wore in the video of "Anthem for the year 2000." And furthermore, Chris' outfit. It was orange and that happens to be the dutch national colour. What a great feeling for detail, knowing our national holiday was two days later.

I saw sc once, live at "Pinkpop" in 1997. That already was one of the better concerts I ever saw and I think this one was even better. Striking is the change Daniel has gone through on stage, even though that already showed at "Neon Ballroom." From a shy teenager, he transformed into a mature and selfconcious singer/performer.

Now it's four days later and still I'm more than impressed and remembering it like it was yesterday (except for the correct setlist).

I hope you people enjoyed reading this as much as I have writing it. 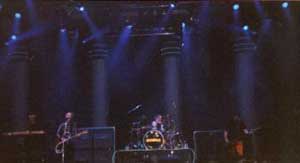 I have to say I was once again really impressed with these guys. I got at the venue at about 4.30 and there were already loads of people waiting to get inside. I was pleasantly surprised to see that this time the age and number of boys was much higher then last time. When they last played in Holland some of them barely reached my middel (and I'm not that big). Unlike most of the other european shows we were blessed with 2 support acts, which I only found out when the first one came onstage. First up was The Living End (for those of you that don't know them: they're from Melbourne, Australia) which I really like since I'm kind of into the whole autralian bands thing and the crowd really seemed to dig it as well. At one point during their set this boy jumped on stage, pulled his pants down and jumped back into the crowd and security didn't even try to get him down! Later on in their set they blew one of the amps up, so the drummer did a little bit of stand-up comedy which was quite funny. A lot of people were a bit disappointed when after only half an hour they went off stage, we could have done with just a little bit more. After about half an hour the stage was ready for Fuel 238 (that's as long as The Living End's whole set!!). When they first came on stage and the singer started to sing everybody was a bit shocked because of his voice but after a while we kind of got used to it and people started jumping along. It ended up being pretty cool, I thought. Then the moment most of us had been waiting for all night was there: silverchair took over the stage. I was just fine up until someone decided to poke his finger in my eye, my contact fell out, I was just in time to catch it, crowd-surfed my way to the front, found this cool dude who gave me a light (thanx heaps!) and I ran back into the pit. So I only missed half of Emotion Sickness thanks to some psycho! I'm not gonna describe the whole concert because you would just get a copy of all the past shows and you should really GO SEE IT YOURSELF! But I have to say that the guys had a lot more stage personality then the past times I saw them play, man I wouldn't want my head to be one of Ben's drums! Also this time the lighting was really good, hey there acctually was a lighting concept, just kiddin', it was just beautiful to watch. The keyboards also really added to the performance (when you could hear them). I thought it was a pity though that Daniel wasn't as talkative as the last time in Amsterdam when he got all mad about the people that had broken his silver guitar. Just as at all the other shows everybody was a bit surprised when the gig ended so abruptly. The band had just finshed, and as they were walking offstage the lights already went on and the dj started playing. They really have to do something about that cause I thought it really sucked, give us at least some fading guitars or something. Anyway, I thought it was a really good show and I'll be there next time as usual. I even walked away with a set list and although it's not on there I thought they played Dearest Helpless but I might be wrong.