Can I get a hallelujah? The gods blessed us! 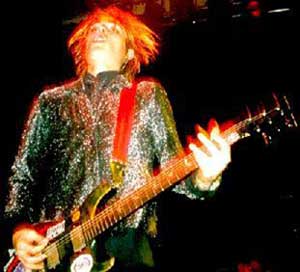 If you've ever been to a church when the priest is blessing someone, that is what silverchair's Daniel Johns did to the packed crowd in the small Stockholm venue called Klubben. The show was sold out in four weeks. The capacity is 600, and twice as many tickets could have been sold.

Daniel was very much into the show. He had some really cool moves during Anthem For The Year 2000, Emotion Sickness and Ana's Song. Chris banged his head constantly and pumped the bass strings hard and heavy during Israel's Son.

Andreas "Vurre" Vural and I arrived at Klubben around 4 p.m. to meet a Swedish television crew who were there to film a special feature. Petra, the TV reporter, was very nice. She talked to Daniel and he told her he knew who I was and what I had done to help promote the band on the Internet. Chris and Ben also came over and said hello to me. They talked about the TV feature, the R2K project and chairpage.

Also at the club I talked to Melissa Chenery of John Watson Management. I talked to the lead singer of Fuel 238 and gave him a light for his cigarette. Fuel was the warm-up band for silverchair and they played a good set. The crowd remembered their hit Shimmer and were treated to other songs from their album Sunburn.

As for the show itself, it opened with Emotion Sickness, which was awesome. The lights were perfect and the sound was excellent. At that point I was standing near the sound board, taking some photos with the cooperation of the very cool silverchair sound guy, Alex Guessard. 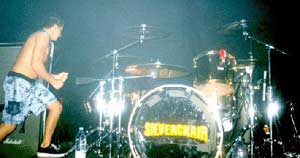 Daniel sang with such passion and feeling. I was told that his voice was not up to its usual standards that day, but I couldn't hear a bit of difference.

Next up was Israel's Son. The crowd screamed and moshed a lot as Chris started the bass line for the song. It felt really good to hear it becuase I like to hear the old stuff as well as the new -- the roots, so to speak.

During Israel's Son someone in the crowd pulled down Daniel's microphone so he missed some lines but no one really cared. After that, Slave was up and the public really enjoyed it, except possibly an old lady who was there with her daughter! Some parts were really heavy and Daniel jumped and did some really cool moves I had never seen before.

Abuse Me was next and it was a real crowd pleaser, with Sam Holloway adding keyboards parts and Daniel singing both higher and lower in some parts of the song. The lights were awesome and the sound was even better on this one. I noticed that Alex seemed very happy with it. 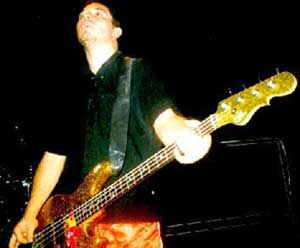 Pure Massacre kicked off and everyone moshed around in the crowd. I noticed boots and stuff flying around and someone throwing beer in the crowd.

"This is a new song," Daniel said next as he began to play a faster version of Ana's Song. The crowd liked it and everyone was in a good mood. At this point I was standing near Melissa, and we were dancing a little, clapping through the songs and laughing a bit.

Then it was Suicidal Dream and Daniel played it very well, despite a broken guitar string. Sam added strong and nice sounds from his keyboard.

The crowd reaction to Point Of View was mixed. Some people said later it sounded different from the album. Personally I thought it was awesome, and Daniel enjoyed this one a lot.

During Paint Pastel Princess, my personal favourite, Daniel did some really cool moves and the guitar parts were awesome. The band seemed really into this song and the crowd also liked it a lot. Nearly everyone sang along with them the chorus.

Next was a really heavy version of Madman. People moshed and clapped and generally just freaked out. The crowd really appreciated Daniel on this night, and he lifted the show up a lot with his stage presence.

Daniel also motivated the crowd for Miss You Love and The Door -- "One, two, three, four, JUMP!" he screamed. Everyone moshed and it was just awesome with Sam adding keyboards. Melissa and I were even head banging! 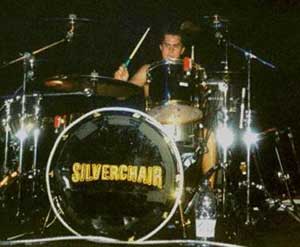 Freak was hard and heavy, as was Anthem For The Year 2000. As this song started, I realized that many new 'chair fans were at the show. There was a lot of screaming. It was no surprise since Anthem is now in third place on Sweden's "Pick Yer Song" on radio. Daniel inspired the crowd to sing "we are the youth" at the beginning of the song, which he played and sang with intensity.

It was hot in the club, and everyone was tired, but there was a lot of moshing and silverchair was rocking as they played their final song, No Association. Daniel played the intro differently, Chris was headbanging and Ben smashed the shit out of the drums.

silverchair left the stage and after the crowd left, I found out that the band was really happy with this show. silverchair is a band for the future, for the 21st century. They rocked and I really liked the guys and the show!

It's the best live performance I ever been to. I didn't know anything about the opening band, but I think they were pretty good. We didn't have to wait long time at all, silverchair arrived at the stage just half an hour after the opening band had left. They seemed to be very comfortable about being in Stockholm, they were in pretty good mood. I was really close to the stage, and saw Daniel, Ben and Chris very well. Next to me stood a cute boy, who helped me to keep my good position, because the crowd was crazy. If it wasn't for him, I would have been somewhere far from the stage.

silverchair opened up with Emotion Sickness. Israel's Son and Slave soon followed. I think everyone there were big fans, because almost everyone knew almost all the lyrics. I spoke to some girls which had come 500 kilometers just to see them. I had expected that the highlight for the crowd would be Anthem, but I think they responded the most to Freak and Pure Massacre.

The highlight for me was definitely The Door (I love it, I love it, I love it), and they played it right after Daniel had talked to the crowd, so people had been standing for a while, and really wanted to jump and get crazy again. Daniel wanted the crowd to shout "Stockholm" and then he asked if we had any festival in Stockholm, and everybody screamed "Water Festival!" (silverchair played there in '97). He said "What?" and everybody screamed "Water Festival!" again. I think Daniel found that pretty funny so he said "What?" a few more times, and then he laughed. It was cute!

I don't remember the last song, because suddenly it was over, and everybody was surprised. They just left the stage, and the lights turned on. Many fans stayed in the local for a long time, no one wanted to leave. I bought a T-shirt, and the we had to go home, but I was so sweaty, and didn't wanna get outside. It was the most wonderful night in my life (so far), and I didn't wanted it to end.

By 'a little Swede'

This was like as awesome at it can be. Really small place almost always makes a great concert. My friend saw Sepultura and Hammerfall at the same location and had told me how great it was and how right wasn't. But again, the coolness can have been because of the awesome act known commonly as silverchair and fuel 238.

Fuel started out all right, but all their songs sounded the same. They were kinda cool though. Drummer was nothing but muscles though.

After Fuel this kinda lame DJ put on some Wu-Tang'ish crap that wasn't so appreciated since the only guys of that kindred was two ugly fella's standing in the back (and they almost had their ass kicked by two satanist that were kinda bothered by their presence and wondered wtf they were doing at a silverchair concert, no-one got hurt though).

Then silverchair came on, wearing their usual outfits. The neon generator that lit up daniels mic stand broke down just before they started so it was a little less neon that usual but who cares really :)

Also there was too little gain on the mic during Emotion Sickness so you really couldn't hear a word Daniel was singing until the 'Get Up' part, but Israel's Son and Slave made that up to us. Awesome. All the liquid in my body kinda left in the middle of the party pit.

The mosh was not as brutal as the water festival they played at last time they were here. Now it was just pure f*king energy. Everyone knew all the words and the sweatshed was total. After I surfed and got at the other side of the fence during Freak. I thought the darnn guard was gonna kill me or something, but of course you don't become a guard if you are a hypermacho stereotype, am I correct? Anyways the guard had been smoking some homemade stuff that smelled not at all like standard tobacco so I figured it was not wise to mess with him.

Overall, it was a great show in a perfect location. silverchair is not at all a stadium band so this was just perfect. Next thing coming up is Metallica the 28th of May, but I doubt they will be much better. But you can't really compare the too can ya?