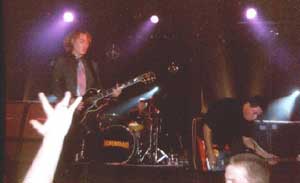 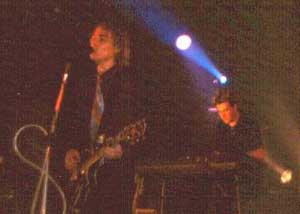 I arrived at 7:20pm with 2 friends at the venue and we were very excited because it was our first silverchair concert. In front of the "Grosse Freiheit" there we about 200 people waiting to get in and it was very interesting to see so many people who all listen to the same music like we do.

The doors opened and we got in around 8:00pm and we first bought a Freak Show t-shirt. There were two guys selling the t-shirts and I wondered who it was. Maybe the two fathers of Ben and Daniel? I don't know (I read a story where Dan's parents sold them).

The venue has a capacity of about 2000 people and the show was SOLD OUT! The atmosphere was amazing when FUEL jumped on the stage. The band was in a good mood (especially the lead singer) and they rocked ! They had so much power and energy and they were surprised how good the crowd reacted. A lot of people were singing along the songs and the lead singer recognized it. When they announced "Shimmer" the crowd was screaming and the band was a suprised because they didn't expect the reaction. I think they enjoyed the show as much as we did and will probably go to their next concert if they'll come to Hamburg again. 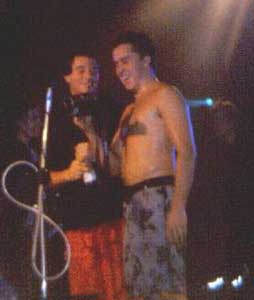 After FUEL was gone silverchair came up the stage and played without a word to say "Emotion Sickness" which sounded not very good because the guys behind the sound board had problems with the PA (Pre-Amp). The next songs were the same like in almost all other shows which were described by silverchair fans.

In a break where Daniel talked a bit I shouted "Happy Birthday Daniel" without a reaction from Dan. I shouted because it was Daniel's birthday (20 years) but nobody seemed to know it. But after I did that a girl asked if it was really Dan's birthday so we decided to sing "Happy Birthday" in the next break.

Two songs were played and then...1, 2, 3... "Happy birthday to you..." and almost ALL the fans sang it! That was amazing! We both got the crowd to sing it ... yeah ... Daniel was pretty surprised because he didn't expect us to know that he had his birthday that day. It was funny to see his face! He said "You're are the BEST CROWD OF THE WORLD" and we were all completely happy. He also that "We're going to rock" and, well, they did.

He wanted us to jump by saying "FUCKING JUMP" in some songs like "Abuse Me" but the crowd didn't react so enthusiastically. Before "Anthem For The Y2K" started, Dan sang "We are the youth" and had us repeat it. I think it that part took a minute. 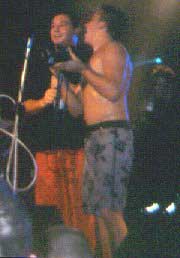 Chris went to the microphone with Ben on his side who had his camcorder with him. Ben was really hard to understand because he had a very strong accent. We understood that we had to sing "Happy Birthday" again for Dan. We did it and Ben was filming us while we did it and I shot some good photos of Johnsy. After the "Happy Birthday" Dan TRIED to play it on the guitar but he it sounded A LITTLE BIT wrong. I think it was a mix between "Happy Birthday" and Australia's national anthem. It was very cool. I thought that he played "Spawn Again" because we were such a good crowd in his eyes. It is very hard to play "Spawn Again" live because Dan said that his voice have to take 3 days to recover.

It was a good concert but not the best I've ever seen. I know that the words "You are the best crowd of the world" are not true and he said and will say it to every crowd in this world. It's business for them to keep the crowd in a good mood. I have to say that FUEL played with more power and energy than "silverchair" and enjoyed the show a bit more. I think it's a bit more business than fun for "silverchair" because they were exhausted of the tour but there are a lot of other bands out there who tour under much heavier problems than "silverchair" and have more fun than them. I don't want to say that it was a bad concert - it was a GREAT gig! 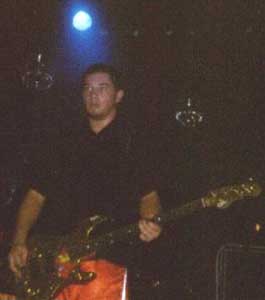