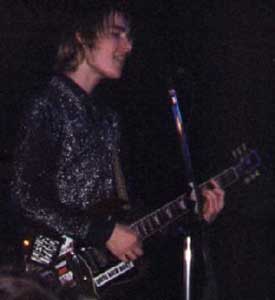 First things first : do NOT attempt to go anywhere near Zurich without a map because you won't get out of there alive… We survived the traffic jams and got to Zurich at 19h. There were about 30 people at the doors so we joined them under the snow. At 19.45h some guy came out and yelled something out in Swiss-German, basically telling all people with tickets to go on in.

Things started off well because that way we were some of the first people inside and we got a good place right up at the front.

At 8.45h Fuel came out and jumped right into a high-energy song. They played the ONE song of them that I knew (Shimmer) and left the stage 40 minutes later. During the interval the DJ just HAD to put techno on…suddenly, the weird music announcing silverchair came on and the silverchair logo on the drums lit up.

Several minutes later the 4 guys came out and there was this massive surge from the back of the room (yes, being crushed against the barrier DOES hurt).

They immediately began playing Emotion Sickness followed by Israel's Son. By that time people had gone buck mad and Daniel uttered a couple of words, something like "hi Switzerland, how's it going? It's cold…" they carried on and Daniel did the Tomorrow solo. 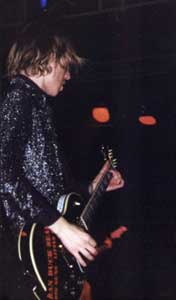 Then Daniel announced the song as being for Satan-worshippers, and they started playing The Door.

Amongst the other songs, they played (in no particular order): 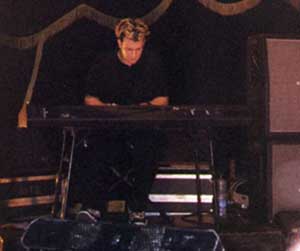 At one point Daniel asked the crowd if we even understood what he was Saying, but seeing as the crowd was filled with either Swiss-Germans (who all speak English), Americans and one Irish person (me), well nobody had any trouble at all. So when he heard the "yeah" being screamed, he seemed a little surprised, but continued talking and got everyone to do the "hallelujah, hallelujah, halle-fucking-lujah" which naturally everyone enjoyed. He then told us what a great crowd we were and stuff like that.

They played for a long time and then suddenly just left. But after shouts for an encore they came back and played 2 more songs before leaving for good.

The DJ then put his bloody techno back on so we decided to go see if there was a back door outside. We saw all these buses and figured it must be theirs so we went up and saw Sam the keyboarder. We talked to him for a while and he signed our stuff and complained about the snow. About 15 minutes later, Ben came out and we talked to him as well. Then some brainless twits (recognizable from the frilly pink umbrella…I know…pretty lame) came along and started screaming like fools when they saw Daniel who just walked away into the bus. Chris went by too and waved. By this time I was under 10 cm of snow so we decided to leave.

Amazing concert! It was the first time I see them live and definitely not the last. 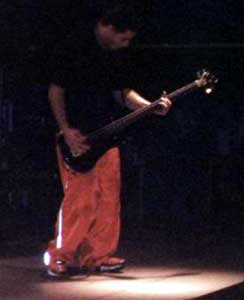