I had a serious case of *butterflies in the stomach*, as did my friends, that Friday afternoon as we were all waiting outside the gig venue to see silverchair. 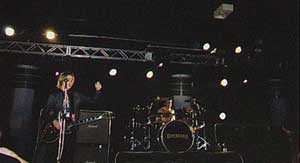 This would be the second time we had all seen them. Last time was in 97', when silverchair had released Freak Show. I was hoping that this concert would be as good as it was when I first saw them play.

We arrived at the academy at 6;30pm, and began mingling in with all the avid silverchair fans. I even recognized some we had seen 2 years ago! Finally the doors opened at about 7;30pm and I walked into an enthusiastic atmosphere. Fungus was playing, and they were doing a good job of it. Mosh pits had already grown, and I could already see lots of jumping people at the front part of the room, in front of the stage.

After Fungus, Fuel 238 came on stage. They also played extremely well, although the mic wasn't working at the beginning of their set. They kept the crowd well entertained.

Finally, the famous "Taxi Driver" intro came on, and everyone went mental! silverchair came onstage, playing "Emotion Sickness." I think emotion did spread on everyone, well, it did on me anyway. It was amazing, it was just as if I was listening to the CD, but better! 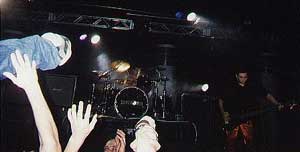 After Emotion Sickness, Daniel introduced their keyboard player, Sam, and then went on to play songs from Frogstomp, which I was hoping they would do. They played Israel's Son, which drove the crowd psycho, as well as Madman! It was such a good feeling, apart from the unbelievable stench of sweaty armpits - everyone who was around me was half as tall as me (except for my friend Ivana). After a couple of songs from Frogstomp, the breathing in of carbon dioxide got to me, so I crowd surfed to the front and was greeted by the welcoming arms of the bouncers - great fun.

I remember Daniel saying something about how they are going to start playing mellow songs, and eventually get heavier later on. He then introduced their forthcoming single "Ana's Song." The crowd seemed to greet this song with open arms, and started to dance to their own rhythm.

After a while, "Miss You Love" was played. According to a second source(!) the crowd apparently stopped moving and just sang to the words, as they were all captivated and fixated on silverchair. I wouldn't know, because I was probably in fixation as well. I just have a clear image of Daniel saying "..teen, teenage angst brigade and..." It was amazing.

After a while, Daniel started to do some more talking. He was saying how great Manchester is etc, and was shouting "MANCHESTER!" gaining a response from the crowd as "YEAH!" He did this about 3 times, then said "NOTTINGHAM!" Everyone seemed to be a bit confused and said "NO!" Daniel then explained that when he was in Nottingham he told Nottingham "...FUCKING MANCHESTER!" With that the crowd let out a roar, and silverchair started a new song.

One of my favorite bits of the concert was when they played "Anthem For The Year 2000." Daniel started off by getting the crowd to shout "WE ARE THE YOUTH". It was if he was conducting, as he was using his hands to get the crowd to repeat after him. He made the crowd say "WE ARE THE YOUTH" about 20 times at least, and then started to sing the rest of the song, with the crowd singing the "WE ARE THE YOUTH" bits. The crowd was under his control and he had the power to make them do what he wanted. Amazing. The atmosphere was great. The crowd were totally into silverchair, and Daniel seemed to enjoy himself as well. It was a pity he didn't really communicate as much with Ben or Chris though.

For the encore silverchair played "Satin Sheets" and "No Association." Effort was made to make the best of the last songs. I was a bit disappointed that they didn't play "Spawn Again" or "Cemetery," but then again, I wished that they had played every song!

I always say this after every gig I go to, but this time I REALLY mean it ---> this concert was the best I had ever been to! Thanks guys!