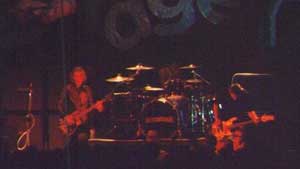 Report and photos by NEIL THOMAS

It was three years, four months and a week ago that I first bought frogstomp. Despite being a fan for so long, the gig at the Garage in Glasgow was the first time that I had a chance to see them.

The doors were supposed to open at 7:30, but when we arrived at about 7:20 there was only a tiny queue. For a sold-out show this was surprising, but we later found that the Garage was absolutely packed.

The support band, Fuel, played 5 or 6 songs, and overall they were quite good, sounding like a slightly heavier version of the band Far (one of my favourite bands). The band had quite possibly the worst image in the world. The singer was wearing a near see-through plastic top, and the bass player (who looked really old) had a black polo-neck jumper with a massive medallion. They had some good songs, but we preferred to pass the time taking the piss and talking crap (discussing coloured rodents -- white mouse, black rat, brown shrew, fawn vole).

There was a gap of about half an hour between Fuel and silverchair. The lights went off, and the "are you talkin' to me?" intro tape from Taxi Driver started before silverchair took the stage. Although I had heard countless number of live tapes from the frogstomp and Freak Show eras, I had not heard any of the new shows live, so I didn't really know what to expect. They opened with a really slow and heavy version of Emotion Sickness, which was really cool. Right from the start, Ben was half-naked, Daniel wore his sparkling jacket and Chris was wearing his baggy silver "homey" trousers.

Israel's Son followed, again much slower than usual, but it was still really good. Before Abuse Me, Daniel said they visited the suburbs and "hung out with the junkies." Anyone who has seen the film Trainspotting will know that there are some really rough areas of Glasgow filled with drugs and violence. The crowd was not impressed whatsoever, and greeted the remark with complete silence, with the exception of one guy who had no trouble making his shout of "Your Maw!" heard. However, Daniel quickly recovered by changing the subject and mentioning their new keyboard player Sam Holloway, and asked the crowd to give him "a nice warm Glasgow welcome." 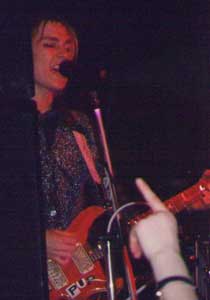 Abuse Me and Slave were both good -- I had brought my camera to the gig to take some photos, and during Slave I got totally beasted, and somehow my camera got stuck on widescreen mode! It took me the entire length of Pure Massacre to figure out how to fix it!

During Ana's Song (Open Fire), I moved to get some decent photos of Chris. Unfortunately, I picked an awful place in terms of sound. It sounded as if Daniel was singing way out of tune, but I don't think he actually was. I could barely hear any notes. I took a couple of pictures and then moved to a better place.

After Ana's Song, I think Daniel was talking about how much he loved Glasgow, but he couldn't understand what the hell we were saying, because of the accent. He then said something like "I hope you can't understand what I'm saying so we can both be confused. We'll only understand one common thing -- rock."

Suicidal Dream was one of the only songs that the crowd really cheered for. Point Of View was definitely a highlight of the gig, sounding as good as the excellent version on the Neon Ballroom CD. Before Paint Pastel Princess, which was also really good, Daniel made a few more comments about Glasgow.

Madman was absolutely wild. At some points, I wished I hadn't brought my camera cause I was worrying too much about it getting death.

Towards the end of Madman, I noticed Melissa Chenery of John Watson Management standing just beside the stage. Up to this point, I had only managed to get photos of Chris and Daniel (from either side), and had got none of Ben. I thought by moving to the side of the stage I could some cool shots of Ben. So at the end of Madman, I shouted to Melissa who let me past the rope to take some photos for chairpage. I was all ready to finally get some of Ben, but when I looked up at his kit, he was nowhere to be found! Chris had also left, and I realised that Daniel was about to do the solo version of Tomorrow. I grabbed a couple of pics of Daniel for the hell of it, and thanked Melissa before being eyeballed by some confused fans who didn't know what I was up to. 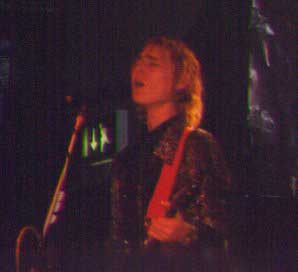 Between Madman and Tomorrow, I wasn't really paying attention, but I'm told that Daniel said something about someone who had been hitting Daniel's hand while crowd surfing, and how it would restrict Daniel from doing fast solos.

I thought the idea of doing a different version of an old song was a good idea -- after playing a song for five years, they must be getting bored of it. However, I wish they hadn't chosen Tomorrow, as I would really have enjoyed seeing the original version as I have never seen them live before, and hence never had a chance to see Tomorrow live. I must admit I did prefer the original, with its inspiration to jump and fight. If they had chosen a different old song, such as Shade or Blind that would have been better, considering the massive success of Tomorrow.

Miss You Love was also quite good, and before The Door, Daniel started talking more crap. He was talking about his "favourite prehistoric creatures," and how the Pterodactyl was his new favourite. He then launched into the familiar "Can I get a hallelujah?" speech, but I was shocked to hear a near-silent crowd reaction! It felt like I was the only one who knew what the hell was going on, having heard him do it on live tapes.

I went up to the balcony for the first time ever during a gig at the Garage. I watched The Door, Freak and the start of Anthem For The Year 2000 from the balcony, and took a couple of group photos. During Freak, the crowd were going absolutely mental, but there was still an eerie silence between songs. I finally finished the roll of film, and gave the camera to my friend Robbie who was standing towards the back. I worked my way into the centre of the crowd and enjoyed the second part of Anthem. I had heard a live version of Anthem on the Internet recently (cheers Denis), and it was very slow. I was pleased to see the band play the song at a good speed when I saw them. 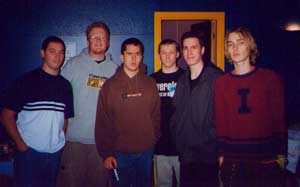 After Anthem, the band left the stage, with Daniel puffing on a huge cigar. They came back shortly, and Daniel started creating some evil feedback noise. My friend Jonny and I had a bet which song was next -- at first I thought it would be No Association, and then I realised it would be Satin Sheets. Jonny thought it would be Spawn Again, and when they launched into Satin Sheets I gave Jonny a quick flick of the fingers.

After Satin Sheets came the final song, No Assocation. I was deep in the crowd for both songs, and it was great. They made a few changes to both songs, and the change they made late into No Association was particularly cool. After the song finished, they left the stage, and shortly after the lights came on. I hung about at the front, hoping to grab a plectrum or drumstick or whatever I could get the security guards to give out, but was unsuccessful. My friend Russell, the spawny bas, managed to blag a set list from the lighting guy, whom we met earlier in the dressing room.

The gig overall was good, but it was not without its faults. There is no other word for the crowd except "shite." Although the band were very tight, they were clearly held back by exhaustion, caused by hectic touring. The temperature in the Garage felt as hot as the Sahara desert, caused by 800 people in a small venue. My camera also caused me a few problems, as I was very concerned about not breaking it! Overall, it was a good gig, and I am really glad I finally got to see them play live.

The lights went down and the stage lit up a strange blue colour, caused by the neon tubes surrounding the bands gear. They came on to the sounds of Taxi Driver and immediately started playing Emotion Sickness -- slowly. At one point during the song, Daniel seemed to shout to Ben to "fucking speed up!" but it never got going. I did prefer this version to the album though, because Daniel changed the vocals and it sounded really good.

In a break in the song, Daniel made a mistake and looked extremely pissed, and this was not the only time in the night that this happened. Next was Israel's Son, which was very slow and had all the life of a dry wheat biscuit. Daniel kept staggering about the stage and at no point did he go mental or really get into the music. The crowd were silent throughout these first two songs, and the band were not enjoying themselves. The setlist can be seen at the top of this page.

The gig never really took off, and was full of 13 year olds trying to start a fight and it ended up with people our age swinging fists down at the front, which is just bad and unenjoyable. I would rather not go to a gig and have my nose broken. During Ana's Song (Open Fire) we couldn't even hear any notes.

However, it picked up during Point Of View, Madman and Paint Pastel Princess, but the crowd were asleep. After Anthem was played they left the stage before coming back out and playing Satin Sheets and No Association.

They left the stage and, all joking aside, there was no response from the crowd. I don't think that the band enjoyed playing such a small venue with such a small stage -- either that or they didn't see the need to impress such a small number of people. [EDITOR'S NOTE: The venue holds about 800 people and the show was sold out.]