All photos by Paul Cashmere/Undercover 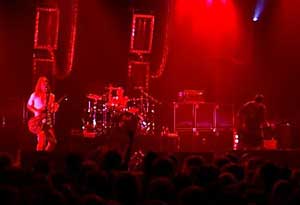 For almost two years we have admired silverchair as musicians and marveled their talents. This would be the eleventh time we'd seen them play and we were anticipating it greatly. This show was a special one because it ended our little excursion with silverchair. The San Francisco show was our sixth show in two-and-a-half weeks and we knew we would be missing the adventures and obstacles we had taken on (namely the two old chicks in the pink jeep from Seattle who tried to ram into our car every chance they got). Our white mini van had taken a beating from all the driving we did in the midwest and west coast, so this was our last adventure before we had to go back to our boring life in Los Angeles.

My friend Heidi has 21 piercings in her ears and due to the fact that she wants to keep the piercings, we did not go into the pit. But not to worry, we still had a great view of the show. Now here's our review:

We were looking forward to seeing silverchair's last show of the tour because rumor had it there would be lots of pranks and let me tell you, we weren't disappointed.

An Australian band called Automatic started it all. During one of their songs, Ben wearing a big funky straw hat and Scott from Local H began skanking around the band. Halfway through their set, we noticed large amounts of Cheet-ohs being thrown at Automatic from the side of the stage. All together Automatic rocked! 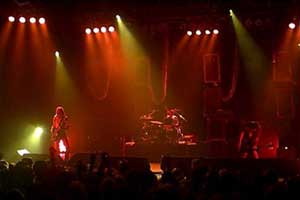 Local H came up next. If any of you caught the show, you know Local H have a roadie that comes out and does back up and percussion. During Eddie Vedder, when everyone including Scott was waiting for the roadie dude to come and do his routine with the tambourine, Ben -- still wearing that funky hat -- came up to Scott's side and started playing the tambourine. Of course being a percussionist, Ben was excellent. Scott said something to Ben and Ben shook his head no. I think he may have asked Ben to sing. In their set, Local H played their own version of Freak which was quite interesting.

During High Fiving Motherfucker, the last song, a policeman and a fireman walked on stage and proceeded to take their clothes off while dancing and gyrating around Scott and Joe. Out of nowhere came this boxer clad "bald" freak who began to dance across the stage ballet style and then tossed himself into the crowd. Good ending for Local H. [EDITOR'S NOTE: The "policeman" and "fireman" turned out to be male strippers hired by silverchair to "entertain" Scott and Joe!] 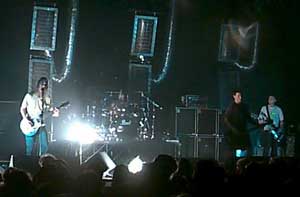 Finally silverchair. The set was incredible and had a fair amount of pranks as well. Toward the beginning of the set, certain members and crew of the opening bands started blowing bubbles on stage. Prank No. 2: This joke involved Scott pulling up a chair next to Chris. As Chris played, Scott stared at him and ate a banana while various members of Automatic and Local H crew parked their asses in front of Ben's drum kit, blabbering away and toking cigarettes. Since Local H did their own version of a silverchair song, silverchair fought back with their rendition of Bound For The Floor.

Prank No. 3: In the middle of their set, four guys adorned in Disney character garb pranced around stage destroying the costume heads. Prank No. 4: It was a typical one. Of course we were waiting for this tired antic to arise and weren't surprised when it happened. Silly string. Guys from each band and crew surrounded the band and bombarded them with the silly string. It was fun but an obvious trick. The encore included the 'chair's version of Paranoid with Scott on guitar, and Israel's Son. All together the best silverchair show we've ever seen.

Well, after having seen them the night before, I was really stoked to be seeing them again, but I never expected for the show to be as crazy as it was. 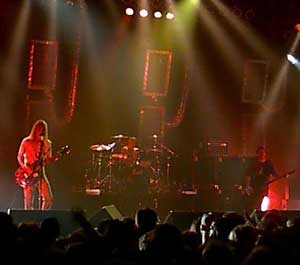 We got to the Warfield at about 6:30. There was already a HUGE line, which was literally ALL girls, that really surprised me, 'cause I was expecting and hoping to have the same type crowd as the night before -- so much for that. They let us inside at about 7:00. At 8:00 Automatic came on. They got a much better crowd response than at the Santa Monica show. During their set I saw things flying across the stage, but I couldn¹t figure out what it was. But the lead singer said, "Who wants strawberries touched by Local H?" so I figured that's what it was.

So after a 30-minute set, and a short set change, Local H came on. Their set list differed from the previous night, though I have no clue what songs they played, they were just in a different order. During Eddie Vedder some dude with a sombrero or cowboy hat came on stage and started playing the tambourine. I didn¹t even think anything of it until Jed (one of the people I was with) said that looked like Ben. Then Ben started laughing and I realized it was him -- he looked so goofy wearing that hat!

Soon, Scott announced, "This is our last song," and they busted out with Freak. No one really reacted to it, which I thought was weird. They stopped Freak, and broke into High Fivin' Motherfucker. Suddenly a cop and fireman walked on stage. Everyone looked a little confused until they started dancing all funky and taking off their clothes. I thought it was hilarious, and all the older women were going absolutely nuts. The dudes stripped down to their lovely (yeah, right!) thong underwear and were dancing and freaking with Scott. He was laughing!

They finally walked off stage and Scott said, "Hey, where are you guys going?" Local H's set ended, and it was soon time for silverchair's last show of the U.S. tour.

At about 10:00 the lights went out and the circus music came on, and they broke into Slave. Everyone went crazy, and my ears hurt from all the girls' shrieks. Here's the setlist: 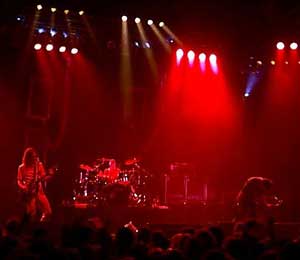 Daniel mentioned that the strippers were a gift from them to Local H. Since it was the last show, there were probably going to be lots of pranks going on, but little did we know!

Cemetery was beautiful, but there were these annoying girls behind me who started screaming every time Daniel stopped singing. It just completely ruined the song, so of course I had to give them a piece of my mind. During Tomorrow Daniel sang, "You think Scott can keep going living like a dick, the water in San Fransisco is very hard to drink..." (He didn't do that in Santa Monica). Meanwhile, Scott was sitting on stage in a lawn chair, over by Chris' side, eating a banana. (Some people said stuff about other people on stage, but I don¹t remember that).

At some point during the show, I don¹t remember when, silverchair started playing Bound to the Floor, but Daniel changed the lyrics to something like "Born to suck dick," or "Scott likes to suck dick," or something like that. Then during Madman, four psycho dudes ran on stage -- two dressed as Mickey Mouse and two as Goofy. They had cans of silly string and just sprayed it ALL OVER Daniel, Chris and Ben, and were jumping and running around everywhere. One of them jumped on Chris¹s back and almost made him fall over, but he still managed to play without messing up. It was SO hilarious!

It was time for the encore so everyone walked off stage. Five minutes later Ben, Scott, Daniel and Chris walked on stage minus the Disney dudes, and started playing Paranoid. Daniel had gotten a hold of a can of silly string and was spraying it at everyone in the audience (at the front anyways) and then threw the can into the crowd. Suddenly the Disney dudes came back and were once again running around being psycho. One of the Mickey Mouses ripped the stuffing out of his head and jumped into the audience. Daniel got up on Scott's shoulders, and Scott was running around in circles, and playing guitar and balancing Daniel -- I guess he's multi-talented!

After they finished Paranoid, they ripped into Israel's Son. Daniel invited all the people who were on tour with them up on stage, and there were tons of people on stage and everyone was running around being crazy, it was SO cool!

So that's about it. That show was one of the most AWESOME silverchair shows I've been to, it's definitely up there with the George Costanza show! It just kicked so much ass! Although the crowd wasn't as good as the Santa Monica crowd, the venue was really cool, and the show was just overall really fun and all the guys had so much energy!