The Cradle Will Rock - Silverchair Make Music Beyond their Years 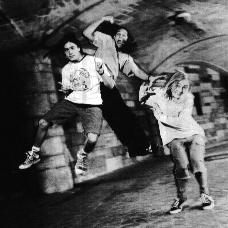 With eyes open, the listener sees a face out of The Wonder Years framed by dirty-blond hair. It belongs to singer and guitarist Daniel Johns, at 16 the improbably senior member of a trio of Australian surf buddies turned hitmakers. Then the eyes wander over to the youthful mugs of bassist Chris Joannou and drummer Ben Gillies, both 15, and the incongruity deepens.

"Do you have to put that in?" asks Gillies while nursing a soft drink at an outdoor Chicago cafe a few hours before the band plays its second North American concert ever. "Couldn't you just say we're 17 or 18?"

"That's what we've been telling the European press," Johns says, explaining the request. "Just to get 'em off our backs."

silverchair are anxious not to come off as a mere gimmick, a grunge Menudo. Already they've been dubbed Nirvana in Pajamas and Sound(kinder)garden in the international music press, and Johns has been saddled with the looks-like-Kurt-sings-like-Eddie label by none other than Cobain's widow, Hole lead singer Courtney Love.

"She popped her head in the door and stared at me for about 30 seconds," Johns says of his first and only encounter with Love, at the Big Day Out festival in Sydney, Australia, earlier this year. "Then she left. We didn't say anything to each other.

"But it doesn't piss me off," Johns says. "It pisses me off when they say we're trying to copy Nirvana, and I just want to say, 'I don't even like 'em.' They're not that big an influence. At the start we were really influenced by Pearl Jam, and I was trying to sing like Eddie Vedder. Now we don't like them, either. It'll only take one more album for people to realize we don't sound like any of those [Seattle] bands."

Making albums wasn't even an issue a year ago, when silverchair were lucky to get 10 people to their gigs in their native Newcastle. "We didn't expect to sell heaps of records and go overseas," Johns says.

But they have. In June 1994 the band entered the song Tomorrow in a national demo competition and won a day in the recording studio of Australia's national alternative-rock station, 2JJJ-FM. The band recut the song, it was added to the 2JJJ playlist, and soon silverchair had a No. 1 single.

A record deal with Australian label Murmur followed, and the trio's debut EP went on to sell more than 140,000 copies (which is double platinum Down Under). The band's new album, frogstomp, became the first debut album by an Australian band to enter that country's pop chart at No. 1 and went platinum in a week.

Now comes the tough part: America, where frogstomp has been released and yet another re-recorded version of Tomorrow is receiving a warm reception at modern-rock radio stations.

But silverchair don't appear all that anxious to make a big initial splash. They played only three shows on their inaugural American visit before returning home because "we've got to get back to school," Johns says.

"Our only long-term goal is to keep playing so we don't have to do an apprenticeship for a real job," says Gillies, punctuating his determination with a slurp of his soft drink.

The three are matter-of-fact about their quick rise perhaps because they're not treated like stars in Newcastle, an industrial city where their teachers still harass them about getting haircuts. Their parents, erstwhile Black Sabbath and Led Zeppelin fans, have been supportive, and their mothers now manage the band. Rehearsals are in Gillies' home, where silverchair's sound has mutated from a blatant Pearl Jam homage to a heavier, neometal assault.

At Metro, in Chicago, silverchair overcome early equipment problems by kicking into the fuzzed-out melodies of Tomorrow and Pure Massacre, but it's the creep to a gallop of Israel's Son, punctuated by Gillies' double-fisted cymbal whacks, that excites the moshers. "I hate you and your apathy ... I want you dead," Johns wails.

Johns isn't particularly angst ridden, it's just that he would rather not write about traditional teen topics such as school and girls -- "Happy, poppy stuff that has nothing to do with what we sound like, he says.

So Johns channel-surfs for lyrical inspiration: A television documentary led to the despairing Suicidal Dream; a new photograph of a boy who died in the 1989 Newcastle earthquake lingered until Johns wrote Faultline. But no matter how topical a song, it survives in the set list only if it passes muster in the pit.

"Like in Atlanta," Joannou says, "people at our show were slamming into each other..."

"Drawing blood," Gillies marvels. "We don't see much of that in Australia."