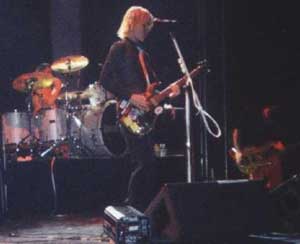 Wot better a way to spend spring break than seeing silverchair (in Las Vegas none the less!) My Slurpee and I arrived at the Hard Rock Hotel at 9 a.m. The band was scheduled to arrive around 12 so I had some time on my hands. I got kicked out of here and kicked out of there, and finally, around 10 minutes before noon John Watson shows up. I had a few very brief words with him before he checked the boys in. Dan walked by uttering the words "ohhh shiiiit!" (probably due to the massive size of the building or maybe it was the Prince costume on display). I gave Ben and Chris a quick hey and the tedious passing of time began.

By about 1 p.m. I met up with a girl named Lynn. Somehow Lynn, her mom and I bumped into Dan and Sam (Holloway) in the elevator. Terribly embarrassed, I walked over to Sam and had a laugh while Dan graciously signed a paper and took photos with Lynn. Sam's a very cool guy and we all are so lucky to have him as a "fifth member" (behind Watto of course) of the band.

Again I ran into Mr. John to make sure I was going to get into the show and told him I thought it was cool that the band played Point of View for a certain chairpage webmaster's birthday. Chris, Ben, and Dan quickly followed Watson, barely in front of the hordes of cameras.

Around four, the band had their soundcheck. If yer ever at the H.R.H. sit in the bathroom stalls so you can hear it (wow, a tip!) 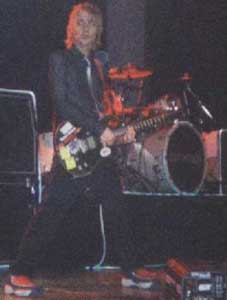 After the soundcheck, Lynn, her mom and I walked around for the remaining time before the show.

The line started forming at 7 and I rang up management to get a photo pass. I ended up meeting three awesome kids from Newcastle (cheers to Cutaway) who were waiting with me for the damn guest list to arrive.

After getting in, the rumor of 3 Colours Red's absence became fact. So instead they played clips of motorcyclists jumping off cliffs and wot not.

Finally, about 9:30, the intro clip played and green lights flickered as the opening notes of Emotion Sickness pierced through the building. It was incredible to see this song recreated on stage, and Sam looked really laid back while playing the keyboard. All eyes were on Daniel at the moment as he wailed that black tangled heart of his out to all of us, but things shifted as the spotlight moved from Dan to Chris while he pumped out the next track's opening riff. The mosh pit began seconds later, cued by Daniel's initial scream followed by "I am I am Israel's Son!"

Next was Abuse Me. Despite the fact that it was "Bailey-less" it still rawked.

Somewhere between these few songs Dan started talking to us about exhaustion and how tired the band was "but that's OK 'cos we suffer for art."

The setlist so far was Neon Ballroom, frogstomp, Freak Show and the pattern continued with Slave, Ana's Song and Suicidal Dream, which I really didnt think they'd play, but it was awesome!

Point of View was played next which I expected, but was very pleased about, considering it's one of my favorite 'chair songs. It's so hard to describe how amazing it is to hear some of these songs live, this tour especially due to the constant shifting of sounds.

Paint Pastel Princess was next, and this seemed to be the most unfamiliar song for everyone. Everyone was asking wot the hell it was... grrrr, get with it guys! Either way the response was great and Ben broke a stick on this song, I think. He beat the hell out of his drums all night (only three pairs of Ben's wood were injured during the process of the concert). Madman broke through next. Chris got in on the "movement" act as he swapped spots with Dan. Then the two stood together for the "solo." Daniel even stole a piece out of the bass book by playing slap guitar for the rest of the song!

The lights then dimmed as people started screaming Cemetery, but were more than happy to receive a solo version of Tomorrow instead. This was my personal favorite moment of the show! Daniel even sounded out some drum parts for us all to enjoy cos we missed Ben and let him hear about it when he came out with his camera telling us to yell out "We love Ben!" I decided not to participate in this due to my undying love for Sweep, but nevertheless it was funny!

Where was Chris now? Holy hell, you can see the boy in those shorts lighting a path for you miles away. So we all basked in his glow for Miss You Love. It was also pointed out to my by my Newie pal Ryan that Dan shed a tear or two.

Dan got us all "jump!"-ing to The Door and then held out a note for forever in Pure Massacre.

Soon after Dan made a comment that went along the lines of such: "OK, OK, this song is for this guy. He's making me laugh, I know it's not cool, but in my head I'm laughing. Dude, you're freaking me out, man! You're freaking me out! You belong on Jenny Jones!" So the band rang out Freak.

Anthem was next followed by Daniel singing, "THANK YOU INDIA! THANK YOU INDIA!" A hard version of Satin Sheets picked up with Chris and Ben stealing every spotlight. Sadly, the end drew near as Daniel told us all to get very angry while ripping out a gritty No Association and vanishing off stage.

Despite the loss of my silver disco ball, the show absolutely kicked all asses. silverchair's got sooo much to offer, and if you haven't seen them yet, you probably live where I do BUT THATS NO EXCUSE, DAMMIT! GET OFF YER ASSES AND VISIT THE NEON BALLROOM!!!

Brandon also passed time in line talking with Tara, Heather, Lynne and Annette, and if you see these girls, don't leave without talking to them -- they rawk!

The show kicked ass! It was the best day of my life! I started the day out by waking up really early because two friends and I had to show up at the radio station at 9 so we could get tickets to silverchair's exclusive radio station performance. Then we went to the Hard Rock Hotel and walked around for a while, and at around 11 we ran into silverchair who had just checked in.

They were in a hurry and they were tired but they still said hello and Ben and Daniel were kind enough to pose for a photo in the elevator! At around 3 we went to the radio station for the performance, they had an interview with silverchair for about five minutes, then Daniel played solo and acoustic.

He did the most beautiful performance of Miss You Love, Ana's Song and Tomorrow. After that we went to the Hard Rock for the concert. They let us in at 7:30 and we had to wait for silverchair to come on at 9, 'cause 3 Colours Red were still in California. They opened with a very good version of Emotion Sickness and ended with the coolest version of No Association.

After the show I was lucky enough to meet Daniel on two different occasions, and also meet Ben and Chris when I met Daniel the second time. They were all very friendly and they talked and posed for photos. It was the best day of my life, and I am looking forward to seeing them in concert again.