By MIKE STRAMAGLIO, The Faultline Page

The doors opened at 7 and the concert was set to begin at 7:30. The first thing I did was purchase some shirts as we walked in. silverchair had three shirts for this tour: a red "Snaz" shirt with dates from their previous tour on the back (the short U.S. one), a blue shirt with the Freak Show artwork and dates for this tour on the back, and a gray Freak shirt with picture of a man about to drive a nail through his head with a hammer. Local H had two shirts for sale and Handsome one. silverchair also had a hat and poster ($5) to buy. All shirts were $20.

Right before Handsome took the stage at 8 Pete Walton called me over and told me that Scott Lucas (singer, guitarist and bassist of Local H) wanted to say hi sometime during the night. Handsome took the stage and played their usual energetic and loud set, which was pretty good, though a little more variety in their songs wouldn't hurt. Before one song singer Jeremy Chatelain said, "This is for everyone who owns the record" and proceeded to play an unreleased new song. They were done in half an hour or so. The crowd response to Handsome was good, much better in comparison to when I saw them at Irving Plaza nine days after their album was released. I think I was the only person who knew their lyrics at that show.

After Local H finished their show, there was a 20-minute break before the lights shut off and the circus music began. In the darkness you could make out the three figures taking their position on stage. The lights went on and Daniel, with black PRS guitar in hand, hit the opening four chords for Slave and the lights shut off again. My friend Justin and I had secured a position in front of Chris near the stage where the security guards were dousing the crowd with water. Daniel, Chris, and Ben had on their usual gig outfits. Daniel had on his khakis and yellow shirt. Chris had on shorts and a blue shirt with a bottle on it. Ben wore shorts and no shirt. They played the chords again and finally went into the song. Many girls in the crowd began screaming and the majority of them knew the words. The crowd throbbed from the heat of the moshing, crowd-surfing, and excitement that had saturated the air.

After playing Slave flawlessly, they went straight into Roses. It was the first time I had heard it live. For the first verse Daniel clutched the microphone with both hands as he screamed the lyrics, since it was just bass, and no guitar. Again they played really well and went into a pretty average version of Findaway. Daniel had said little between songs so far. After Findaway he switched to his beautiful silver PRS which he desecrated, in my opinion, by putting a Minor Threat sticker on it (and I thought I was the only one who had that sticker!) Daniel introduced Bailey Holloway as "the guy who played in KISS." Someone yelled "Ace Frehley!" and Daniel said, "Oh yeah, Ace Frehley. He helps us with our masturbation techniques!" This evoked a mixed response from the crowd. Daniel began the phaser soaked notes of Abuse Me which prompted the crowd to scream and cheer. They played the usual version with Daniel rising in pitch with the lyrics on the final chorus, which makes the song much cooler than the studio version. 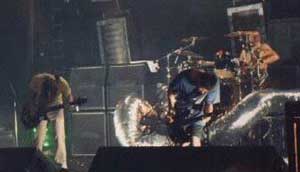 Bailey left the stage and Daniel began the notes to Pure Massacre, which I found to be pretty strange since he normally didn't use his silver PRS for heavier songs. This version of Pure Massacre wasn't as good as usual, I thought. They almost seemed out of synch on many parts and were playing it much slower than their usual upbeat live songs. The guitar-playing didn't seem very tight or clean.

Daniel then switched to his orange/red colored PRS guitar (which Mike Amburn had told me was also formerly owned by Page Hamilton) and the remaining two-thirds of silverchair exited the stage. Daniel played a pretty good version of Cemetery. And, hey, would Cemetery be complete without the dumbass teeny boppers screaming? I guess not. I loathe teeny boppers. Anyway, after Cemetery they eased into Suicidal Dream which was very good; these two songs in a row pretty much held the audience in awe.

After Suicidal Ben and Chris came back, and they played Tomorrow with slightly altered lyrics. In the middle of the song Daniel was hit by a shoe in the shoulder, but he continued undaunted. After the song he said something like, "Could you please stop throwing shit? If you are going to throw something, throw it at Ben." This caused the now bald Ben to grin from ear to ear. A couple of people booed Daniel and his guitar was pelted by something very small.

Daniel then strapped on his green Page Hamilton PRS and began an excellent version of The Door, which had just about everyone in the crowd moshing. Nothing was really different about The Door other then the few new little lead riffs Daniel plays between verses. After The Door they began an awesome version of Faultline complete with a new, Helmet-esque ending. This was probably the most lively song of the night. They then played a good version of No Association during which Ben broke his high hats. Daniel did his usual scary voice for "stop sucking the blood right out of me!" I assume Chris was hit with something during the song because after the song Daniel said something like, "Uh-oh, you've done it now! You pissed off Chris! Chris is one bad motherfucker when he's mad." Then I think he said something like, "He's gonna come down there."

They then played Freak, for which the oven backdrop lit up, and followed it with Madman, which many guys had been screaming for all night. During Freak Daniel did his scary voice for "get a different disease" and modified some other lyrics. He did his normal "as cool as all of fucking you" but also during the outro chorus sang, "I'm a freak, you're a fucking freak!"

Following Madman they left the stage and Daniel returned with his red/orange PRS and Jeremy Chatelain of Handsome to play a cover of Minor Threat by Minor Threat. Before they began Daniel said, "If I was a woman I would want to have sex with Jeremy." They played Minor Threat better than Minor Threat does! Following the song Daniel switched to his silver PRS and the lights went off, except for a sole spotlight which enveloped Chris. Chris began the bass line for Israel's Son and the crowd went absolutely nuts. They played a decent version of it with Daniel playing a strange solo/interlude. After the song Daniel did some mad feedback for a couple minutes and leapt on his cabinet. He slumped over it and his silver PRS formed a cross on the amp. After lying there for a couple minutes Daniel tossed his silver PRS straight upward. My initial thought was, "Holy shit, he's retarded," but he caught it, barely, and then threw it into Ben's drum kit, which hardly did any damage to it.

Some other things Daniel said during the show:

Following the show I tracked down Pete Walton, who told me that he would go get Scott Lucas for me. A couple minutes later Scott came over, behind a thick pair of spectacles. We spoke for about 10 minutes or so before the security guards began hassling us. The nerve of a security guard telling Scott to move! NO ONE recognized him at all! He told me he liked my Local H page and was looking forward to saying hello. After I got his autograph I told him I'd be seeing him the next night in Asbury Park, New Jersey.

In retrospect, silverchair played well, but not as good as their previous Irving Plaza show or their post-NYC show in Asbury Park show. They fed off the crowd well and Daniel was pretty talkative. The crowd was good and not many bras or pieces of underwear landed on the stage. My only complaints are that Pure Massacre just didn't seem right and they didn't play The Closing.