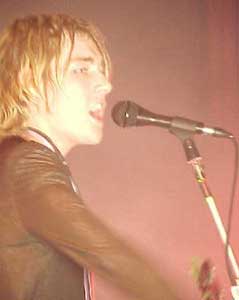 I cannot begin to describe how incredible it was, this was my 4th time seeing silverchair, but my first time that it was their own small headlined show, and it was definitely the best.

I met my mate Suzen at 5:30pm and we headed down by bus to the sold out show at the Croatian Cultural Centre (which I was expecting to be crappier than it was). We got there at like 7:15pm or so and there was a short line up to get in. Once in side I took note of the pink walls and massive groups of tall people! (where did all these 6 foot silverchair fans come from? I don't remember seeing them before)

Anyways, we walked around for a while and then the lights went down and Nickelback (a local Vancouver band) came out, supprisingly they were really good! We made our little way to the second row. (That's what I love about being little, it's so easy to squeeze your way into small places) on to what you want to hear more about...silverchair.

We were told they would be out in 15 mins, yeah try 35 the wait in that mosh pit was like hell (do you really need to push/shove/poke/pull/crush/jab and sweat during the set change?). Anyways they came out and began Emotion Sickness. It was lovely, simply beautiful.

I can't remember every song, but you know the basic ones they have been playing so far on the tour. "Israel's Son," "Madman," and "The Door" seemed to be the mosh pit's favorites. I think "Anthem" and "No Association" were well taken as well. "Ana's Song" is totally the most popular new tune, everyone erupted in cheer when Daniel began playing it.

I pretty much knew before hand that they wouldn't play my favorite songs off the new album ("Steam Will rise" and "Do You Feel the Same") But I thought MAYBE a slight change in the set list could occur, sadly it did not happen for me! That's all right, you know it was still wicked. 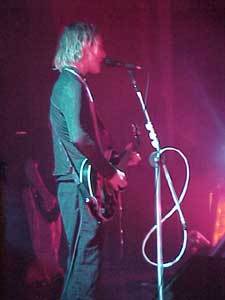 Daniel told us about the new microphone (they switched mic's after 7 songs or so) and how it was for perfect clarity so we could listen to all his political statements: "# 1, believe in something, believe in something, that is my first statement; I don't know what the hell I am talking about, so ignore me." He sang about Busta Rhymes and Janet Jackson.

The lights went out during Anthem and they continued to rock in the pitch black. The house lights came on and when the song ended they left the stage. The lights were working again when they came on for the encore.

Daniel said (jokingly) something about how "We are silverchair, a professional fucking rock band, and this is crap and we aren't going to fucking take it anymore. We're going home to Australia, but first we're gonna rock!" They followed that statement with crowd-pleasing "The Door"

All in all they were full of energy and seemed to enjoy themselves. I think I broke my hand. The mosh pit was INSANE, (I was soaked when I left the pit, like I had been in a shower) It was crazy crazy crazy, but most of all it ROCKED! Everyone enjoy the shows to come, and get ready to rock! 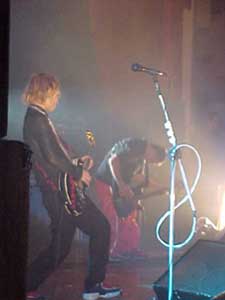 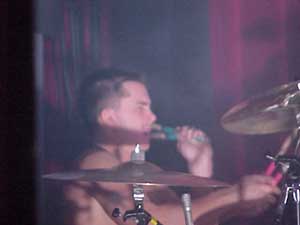 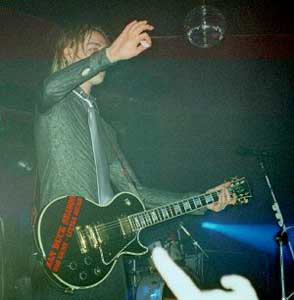