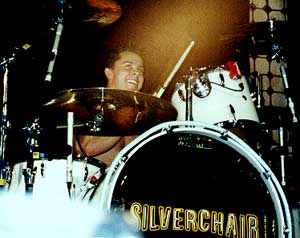 As I approached the line leading up to the Paradise, it finally hit me - I would be seeing silverchair tonight! It had been more than 1 year since I'd seen the band live and anticipated the same "rocking show" silverchair always present. But this time I was wrong. Silverchair not only rocked, but they translated a musically complex album into a fantastic live experience.

Following the mediocre 3 Colours Red, silverchair hit the stage about 10:15PM. They jumped right into new material with a brilliant version of Neon Ballroom's first track, "Emotion Sickness." Because this song is so "big" musically on the album - meaning the music comes across so powerful and complex - I was very impressed at how well it came across live...it sounded amazing! Plus, it allowed touring keyboardist Sam Holloway to show his talents early on!

Two crowd favorites, "Israel's Son" and "Abuse Me," were next up, followed by an explosive version of "Slave" which really got the crowd (and band members!) jumping, (by the way, no moshing since the club threaten removal without readmittance to anyone who moshed). Just before the sparkly-clad Daniel announced he'd be playing "another new song" next, he claimed that Boston was silverchair's favorite place to play and since Boston is a huge college city, continued with something along the lines...that silverchair was a big supporter of school and college and wanted people to keep going to school since education was really important. With that said and done, the band played one of my favorite new songs, "Ana's Song". It was another great live portrayal that seemed to keep the energized crowd's attention with its strong chords. 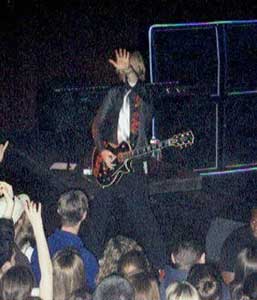 Another old favorite came next, "Suicidal Dream," was followed by a song Daniel described as "not as futuristic as the rest of the new songs," "Point of View". A superb performance of "Paint Pastel Princess" came next, convincing me that this song is worth listening to over and over and over again! The music sounds even better live than on the album!

After the energy filled "Madman," Daniel (wearing a boa that someone threw from the audience) performed an enjoyable, yet different solo version of "Tomorrow" for which he said was for "anyone who listens to silverchair". Another new "slower" song, "Miss You Love" was well received by the crowd and was followed "The Door" - a song that continues to be incredible live and had the entire venue jumping by the 2nd line! "Pure Massacre", "Freak", and the latest single, "Anthem for the Year 2000" kept everyone going and before we knew it, the band was off the stage!

A few cheers and they quickly returned for a completely intense encore beginning with "No Association" and finishing up the night with the amazing "Spawn Again". This was the first time I had seen the band do these songs back-to-back and let me say, it was "hard rocking" and I liked it! On the final chord of "Spawn Again," the band bolted from the stage and I wasn't the only one asking for more. The crowd chanted for silverchair to return, but it wasn't to be as the lights and the over-head music came on. Everyone in the house seemed to be thinking the same thing as me - I can't wait to see this band again! 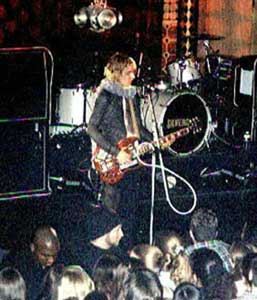 I got to the Paradise around 6 p.m. The doors didn't open for a while, and the opening band was just unloading equipment so my friend and I went and got some food. Back again at 7 p.m., I stood in line for a good hour before I got in… flashed my ID walked in the door… a group of girls that were there when I was getting tickets couldn't get in because they were underage. I felt wicked bad for them. Anyway this is supposed to be about SILVERCHAIR!

The CHAIR took the stage at about 10:15-10:30 and opened with a pretty good version of Emotion Sickness. Then Israel's Son.. some kids tried to mosh and a guard picked up the guy that started it and carried him out. After that I can't remember what order the songs were in, I'll just give highlights.

Miss You Love: a great version of the song, my favorite off the new album… sounded more or less just like the CD.

Paint Pastel Princess: Fucking great, that song was really cool and Daniel sang a little different changing octaves in his voice, it was cool.

At one point Daniel tried to get us all to be quiet, WBCN was playing the show over the air… so Daniel said something like ok we are gonna do a practice quiet… then the real thing. 1…2…3. People talked and he was like "ok what the fuck, no, no, no! You have to be quiet!" OK here is the real thing... 1…2...3... People talked again and he was happy and just said that was the worst ever, fucking horrible, but it's good because it means your all restless and ready to rock. 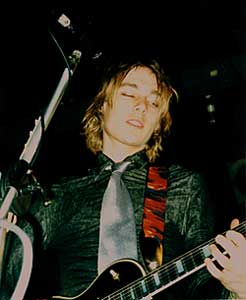 He did his version of Tomorrow solo which I really liked a lot. I wish he had done Cemetery, I love that song, or even a solo Shade. Some girl had thrown a bra or whatever you call it on stage and Daniel said "thank you for the presents, I like presents a lot," and he put it on before he played Tomorrow.

The Door: great rock song for the Boston crowd, Freak was a good change, but for some reason I could swear that they played it 2 times last night. It just seemed like I had heard it 5 mins. before.

Anthem for the Year 2000 was really fucking great. He really got the crowd going having us sing along and shit ( I was singing along to every song so it didn't make any difference to me) and the whole Y- with his arms thing. It was cool.

The end was the best: doing two of my favorite songs. The 'chair left the stage and we all started chanting silverchair-silverchair and they came back and did a phat version of No Association and the new heavy song Spawn Again. That was incredible, Daniel hadn't taken 1 drink of water all night and his voice held up through it all, even the screaming in Spawn Again. And that kid can howl… I would love to see him do a metal song with the Deftones or Korn (who silverchair did a few shows with back in the day).. But anyway all in all it was a good time, except for the lack of moshing, but the band played a tight set and all was well. Feel free to e-mail me anyone who may read this.