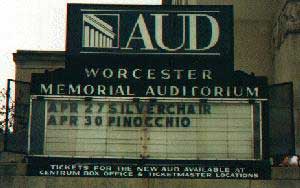 We got to the Worcester Auditorium at like 4, and we went to the side doors, cause we saw a lot of people standing around up there. Right when we got there, Daniel and Ben were walking out of the bus. Chris might have been there too, but I didn't see him. Daniel waved, but he looked down at the ground the whole time, and seemed kinda embarrassed. But Ben was smiling really big, looking at everyone.

Then about 5 minutes later Handsome came out of their bus. Then we went up to the front stairs to see how many people were there. While we were up there we missed seeing Local H. We went back to the side door, and Jeremy, and Peter from Handsome were standing around signing autographs and talking to people. I got a picture, and autographs. They were really nice.

They were telling some girls in front of us who silverchair's dads were, and they wanted to take pictures, and the dads looked so embarrassed. We were walking back to the front door of the Aud, and we saw Tom from Handsome talking to some people, so we stopped and got his autograph. 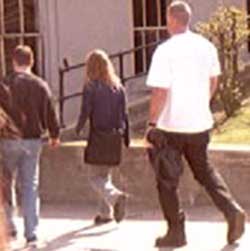 Then Joe from Local H ran to the bus with a box of pop tarts. We were near him, and he smiled at us and asked if we wanted one. We said no, and asked for his autograph instead. Then we went back to the front steps to wait. By then it was like 5:30. We still had to wait an hour, but there were some skateboarders in front so, we were all like cheering them on.

When we finally got in, we went over to buy shirts, and then we went in the aud. There were already tons of girls standing right in front of the stage. So we got in back of them, and waited another hour. Handsome came on, and they rocked. No one around me really knew the songs, but they were jumping and going crazy, so it was pretty good. Then Local H came on and there was a huge pit, and everyone was screaming highfiving motherfucker, but they didn't play that till the end.

Once silverchair came on, everyone went crazy, and they opened with slave, like usual, then roses, and I don't remember the setlist, but it was probably the same as the one they've played for all the other shows. When Daniel said hi Worcester everyone went crazy. Then he said that Worcester was a beautiful name for a town, and that when he got older, settled down, got married, and had kids, he was gonna name his daughter Worcester.

He told us we were quiet, but we ruled just the same, so everyone started screaming. I couldn't really see Chris, so I can't really tell you what he was doing, Ben was thrashing away at his drums. He smiled quite a bit. Daniel was just head banging, and making weird faces, and stuff. Daniel told us that Ben liked rave music, and that he liked the beat of rave music. Then he said something like Ben listens to Phil Collins, and Ben started laughing, and he yelled something, and Daniel said what's wrong with Phil, he's bald like Ben. I don't really remember to much about the rest of the show, sorry! For the encore, they played minor threat, and israel's son. At minor threat there were huge pits everywhere, and it was so cool! After they finished playing that Daniel said it was more punk then punk. After the show was over, we went back to the side door, cause that's where all the people were. We heard girls screaming so we looked over, and Daniel, Chris and Ben were walking back to the bus. Anyway, the concert kicked ass! I have tons of bruises, so it looks pretty cool!

we got to The "New Aud" at 4:30, but doors weren't to open until six, so we sat on the corner of these steps, not caring if we were in line or not. some girl was wearing a sports bra, and had ben written on her stomach, and everyone else had either a silverchair or a nirvana shirt on. i wore these snazzy blue pants that ended up dying before the night was over. when the doors opened, there was a mad rush to get in (it was general admission you see) and i almost got squished. luckily, we had floor tickets (some people were stuck in the balcony). so i went to look at the shirts and i didn't buy a silverchair shirt, but i did buy a Handsome shirt, and the poster. it was a long time before handsome came on so we all ate. When handsome did come on, i stayed seated because none of my friends wanted to go to the pit with me cause they hadn't heard the band. but one of my friends came up with me at the end. Local h was up next, and boy did they rock! i don't have any of their cd's but I knew some of their songs. We were in the pit, but off to the side cause no one had ever moshed before and didn't want to break anything.

It seemed like forever before silverchair came on, but the music they played in between was cool. the whole crowd sang along to the beastie boys. I had been moving closer to the stage, but my friends didn't. When the circus music stared playing there was a general shirt in the crowd and i got up like, 7 people form the barrier. then (yay!!) out come daniel, chris, and ben... and all these girls are like " i love you daniel!!!" and i stared screaming obscenities at them and they moved out of my way. I still couldn't see, being 5'2'' and all and everyone was banging in to me and it was making it very hard to breathe and I complained really loud, and this nice boy brought me to the front with him. So we were two people from the barrier but I couldn't see so ray lifted me up to see the boys of silverchair. The show was so great. During an intro to some minor threat song, ray gave me a glow stick and lifted me up and daniel just smiled at me as i yelled to "just play the song".

I left the show bruised and sweaty, but happier than ever, and i wouldn't give this memory up for the world.