All photos by Zack Hill 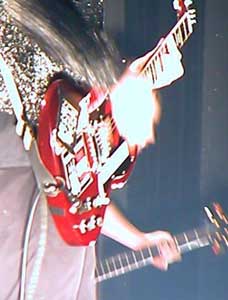 My friend Steph and I arrived and waited in line for about an hour and a half, before being let in. We checked our coats and ran to get the perfect spot! Unfortunately, the perfect spot was taken so we settled for the side of the stage. 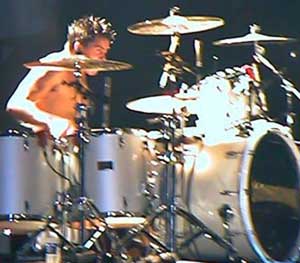 The show started at 8 exactly with Lit, a band from Anaheim, California. They were crazy! They said it was their last show with the 'chair so I felt special seeing them for the last time with silverchair. They were pretty good at getting the crowd going, and even played 30 seconds of Tomorrow, which really got me ready for the 'chair. It was hilarious cause the lead singer didn't really know the words, but was still creative with what he knew! Their set lasted around 45 minutes. That's when the big guys came out and gathered in the pit. Steph and I were really scared cause we aren't exactly big enough not to get the crap beaten out of us. But we decided we would fight for our spot.

The 'chair came out at around 9 o'clock. It was fucking crazy! This being my first silverchair concert, I didn't really know what to expect. After waiting four years for a concert near me, I didn't want to be let down. The Taxi Driver "Are you talkin' to me?" came on and the room filled with screams.

silverchair opened with an incredible version of Emotion Sickness, a song I was really looking forward to hearing live.

They really got the crowd going. Daniel didn't say much, just that Montreal rocks and that he thought it would be the leader in the number of neon lights in the year 2000! All night Daniel was dodging plastic bottles and presents and a T-shirt even landed on his shoulder during the set. I think Ben's kit got pegged by a bottle too. It seemed Daniel was a little paranoid about being hit ever since he got decked with that bottle in Santa Monica, but I would have been too. He kept saying, "Stop throwing gifts at me. I have enough stuff!" 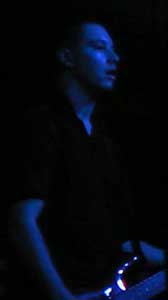 Throughout songs, when wasn't singing Daniel kept mouthing "crazy mother fuckers" which I thought was hilarious.

They rolled through slow to heavy songs all night and I was really happy to see my favorite 'chair songs played: The Door, Paint Pastel Princess, Suicidal Dream, and Miss You Love.

The highlights of the show were a beautiful solo version of Tomorrow by Daniel, Ben's crazy drumming on The Door, Chris drawn so far over his bass during Ana's Song and an energetic Madman, Freak and Anthem.

During Anthem, Daniel tried to get the crowd to repeat "we are the youth" and after five or six unsuccessful tries he gave up. I think most of the crowd was confused, but I was screaming "we are the youth" as loud as possible. I hid my fragile self behind this big guy who was taking his anger out on people smashing into him from the pit, so I was safe and happy!

After the show, Steph and I stuck around for an hour or so outside in the freezing cold. Eventually the band came out to their bus. The funniest part was that Ben had a video camera and filmed the whole thing. He went and sat at the front of the bus and videotaped the people there while Chris and Daniel sat at the back. John Watson came up behind us as Ben was filming our bewildered faces. A girl lifted up her shirt and flashed Ben. He seemed pretty happy with it and kept filming. As they pulled away, I stuck my tongue out at Ben and he did the same, and my silverchair day was over. If they come within 2000 km of my hometown, I'll make my way all the way there just to see the 'chair again. silverchair put on an amazing show, the best concert I have ever been to!