silverchair's performance at the Warehouse in Toronto was considered by several observers to be the best of the band's March series of shows across North America.

The gig marked the first live appearance outside Australia of Point of View, one of the strongest tunes on silverchair's Neon Ballroom album. From that night on, POV became a staple in the band's live shows.

The show at the cavernous Warehouse sold out quickly, and the queue of ticketholders waiting to get inside extended around three sides of a huge city block hours before the doors would open.

There were more than a few people in the crowd who remembered the band's first show at the Warehouse in 1995, and silverchair delivered once again. 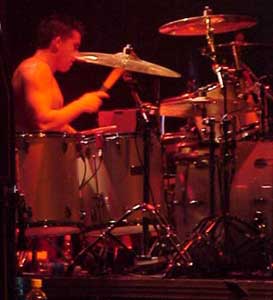 We arrived at the Warehouse at 3:30 p.m. and as we were waiting to get in, a black car pulled up. silverchair stepped out and quickly went into the building. People were screaming and acting silly. It was so cold out that I was glad when the doors opened at 7 and we could warm up. My friends and I went to the back of the soundboard which is always a good view for short people (I'm 5-5, you do the math!) and waited for an hour before Grinspoon came on. A friend told me that the best place to go in the Warehouse to have a perfect view is the bar at the back, and since I turned 19 (legal drinking age in Ontario) just a month ago, that is just where I went. I could not believe how amazing my view was! People were coming into the bar area and filling up the rail in front to get a good view, so I stayed in my spot and made sure I kept it. 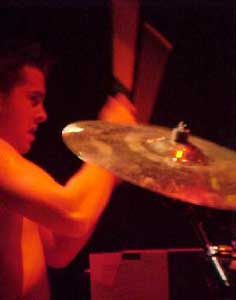 Grinspoon are a pretty cool band. I'd seen them at the Warped Tour in Buffalo, N.Y. I know they played Champion, Pedestrian and DCX3, but I'm familiar with all of their material. They played for about a half an hour. The lead singer (Phil Jamieson) is sorta "out there!"

After Grinspoon I got a guy to save my spot and I went over to the bar on the left side of the Warehouse because there were some awesome silverchair promo posters for Neon Ballroom and I wanted one. I asked the girl at the bar if I could have one and she said people could take them at the end of the show. She pointed to one and said she would save it for me. Needless to say, I was one happy camper.

Before Lit came on, Rob Zombie's Hellbilly Deluxe was played on the P.A. which was cool since I just saw KoRn and Rob Zombie on Monday. Lit hit the stage about 20 minutes later and I was pretty much bored as hell with their set. I thought they weren't a good band; they had no originality. The lead singer was weird. I wished that that it was Lit before Grinspoon since Lit played for 45 BORING minutes. After Lit left, my feet were killing me so I sat down on the floor of the bar.

I was impressed with the music played between the bands. Before silverchair came on, songs like The Funky Shit by Prodigy were played. The lights went out and the neon around Daniel's and Chris' amps, Ben's bass drum, and Daniel's mic was glowing. Everyone thought they were coming out then, but when I finally heard the familiar "You talkin' to me?" from Taxi Driver, and I knew silverchair were coming out very soon. 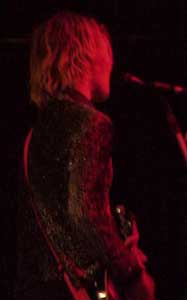 They hit the stage at exactly 10:15 p.m. and everyone went nuts! I could not believe my view -- I could see them all perfectly and since the bar is higher than the floor I had no heads in my way. Daniel was wearing his "glitter" shirt from the Anthem video, Chris had his orange pants on, and Ben was shirtless, as usual. They opened with Emotion Sickness which I just watched in awe for the whole time. It was absolutely beautiful, and Daniel's voice was full of emotion. I was mesmerized by the song.

Next was Israel's Son, which is always a crowd pleaser, and it got everyone moving. Daniel was moving his hands all over the place, pointing to different parts of the room.

Next was Abuse Me, which is always a favourite. Slave followed which got me crazy, being one of my favourite songs off Freak Show.

Then Ana's Song, which was amazing, Suicidal Dream, Point of View (first time ever live [outside Australia] and it was amazing!)

Paint Pastel Princess was next, which is so awesome, then Madman which was so funny! Daniel jumped up on the monitors on the left side of the stage. Unfortunately I couldn't see him since there was a pillar in my way. Then he ran to the right monitors and got up there! He was going nuts! It was so awesome.

The Tomorrow solo was next. It was awesome, but some MORON threw a shirt on stage and it landed right on Daniel's guitar, which made him stop playing for a moment. He simply took the shirt off and continued playing. Miss You Love was beautiful and The Door got the whole place going crazy. 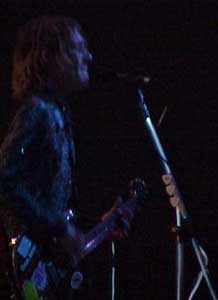 Pure Massacre was a favourite, Freak and Anthem for the Year 2000 were the last songs before the encore. Daniel made us do the "WE ARE THE YOUTH" thing, clapping our hands over our heads. Daniel said a few things in between songs, a lot of which I couldn't for the life of me understand. But he did say "Hey Toronto, we love Canada" and he rambled on about rock and roll for a while -- that we're going to be going home all tired, smelling of rock! He was moving around like crazy, putting his middle finger up, hand gestures, it was great. I sang along to all the songs, as usual.

They left the stage and chants of "SIL-VER-CHAIR!" came out of sections of the Warehouse. Five minutes later, Ben came out alone with a video camera and of course everyone was freaking. He came to the mic and told everyone to be quiet for a second and said, "OK, at the count of three, everyone say 'I love you Ben!'" He counted to three and nearly everyone in the Warehouse yelled "I LOVE YOU BEN!" It was absolutely hilarious!

Chris and Daniel came out and Daniel said a few things about Ben, that he wanted to have sex with all of us and he said "put your hand up if you want to make love to Ben," and Daniel put his hand up which I was killing myself laughing over :) They played "Satin Sheets" and the crowd went insane! I knew "Spawn Again" was to be played next because Daniel said "animal liberation." I was SO glad to hear Spawn Again because I've never heard it live before. It was amazing, Daniel did like a "death metal" thing at the end.

silverchair left the stage at 11:30. I went to the side bar and the woman did indeed save the promo Neon Ballroom poster for me so I was happy. The crowd filed out of the Warehouse. This was my fourth time seeing the 'chair live and I have to say it was definitely the most amazing! The new songs are INCREDIBLE live and I can't wait for them to come back.