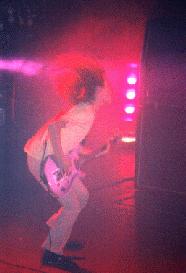 After a 6 hour car ride, me and my best friend finally reached Montreal. It was about 2 o'clock, and as we drove past the Metropolis, we saw a line about two blocks long for a show that didn't start till 8:00 ... We went out to eat, and when we arrived there at 7:00, we were surprised to find that there was no line. There were scalpers outside, but they couldn't seem to grasp the idea that i already had a ticket.(they were speaking french, I speak english).

We walked inside, and went straight down to the front of the stage, or at least as close as we could get. All you could smell was pot, and it seemed like forever before Handsome came on. We were exactly in the middle of the pit and when they came on, i felt. I got kicked in the head, but that was only the 1st time.I finally made my way out with my friend, but that was only because some guy pulled us out. I got bored with Handsome because all of there songs sounded the same, but other than that, they rocked. Finally, Local H came on. They are AWESOME!!!! And i kind of got back into the pit, but not really because i have heat induced asthma:( and i still got kicked in the head two more times.

Local H rocked, but our legs ached, and they kept apologizing about some guitar not working and bla bla.so i went and got some water. On my way back some guy was laying screaming because ha had been dropped on his neck. 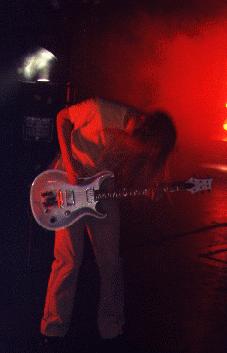 Finally, circus music started playing, and teenies started fainting and Chris, Ben, and Daniel came out and ripped into slave. It was awesome, except i thought was dying because a lot of people tipped over. They played these songs (not in order) Roses, Israels son, suicidal dream, tomorrow, pure massacre, faultline, minor threat, freak, cemetery, and the door(i think thats all)

I was almost set on fire during cemetery and some girls behind me were bawling there eyes out. During Israels son i got in front of Daniel, and he kept screaming "Put your fucking hands in the air!!" He looked at me a few times but my arms got tired and i put them down. Either there dads or roadies or somebody with them dove off the stage. Before they went on some person with a shaved head opened the backstage door, and i thought it was Ben, so i stared and he said do you know who I am? Maybe it was him. Anyway we had an awesome time, and silverchair kicked ass!!!!!!!!!!

On April 26 1997 I went to my first really good concert(the only other concert I had been to was NKOTB). I went with my dad and 4 of my friends, we arrived at the club around 5:45, I had a teeny moment when we drove past the club! the night we had all been waiting for was finally here! We met up with some friends that had gone down early. We waited while listening to some of the soundcheck and we made fun of all the teenyboppers some of witch were wearing these tight ass bell bottoms how they planed on jumping was a mystery. The crowd was let in around 6:30, as soon as we got in we sent my dad to buy shirts and posters,while we headed for the mosh pit we were about ten rows back. They were playing music by 'KoRn',' 311', 'Beastie Boys and lots of other cool stuff!

We were almost killed when one of the roadies came out to throw Local H stickers. Before Handsome even came on the mosh pit was crazy so we opted for the side of the pit, where we could see better and were even closer but we were right next to the speakers but it was a small price to pay for something we had waited for, for such a long time! When Handsome came on around 8:00 the crowd wasn't very responsive.

My ears were killing me they were so loud, so I sat on the floor with one of my friends( we weren't afraid of getting hurt cause no one was really jumping at all). After a painful set, thanks to Handsome, I couldn't hear anything. Local H was up next, I had heard some of their songs on the radio and I thought they were pretty good. When they started playing 'Fritz corner', everyone was going crazy jumping around and having a good time, Local H played an amazing set I was on a mission to buy the CD A.S.A.P! we waited what felt like forever for silverchair to come on, finally at 10:07 the circus music played and people started screaming, they played Slave perfectly and went into 'Roses'.

Daniel said 'thank you' in french and then counted to ten. they began 'abuse me' it was played really well but there was this big guy standing in front of us that had the worst B.O ever he didn't get that when my friends and I started pushing him away that we weren't moshing we were trying to get some clean air but the club smelt like pot!

They played a wicked set for the encore they played Minor Threat by Minor Threat, (Jeremy from Handsome came to sing with silverchair, while Scott and one of the roadies danced around the stage, witch got some laughs from the ' chair'). They went into 'israel's son' witch was played flawlessly. It was the perfect song to end a night I'll never forget. A silverchair concert is something everyone should see!

I rode the train for 10 hours to get to Montreal and than had to buy two tickets, one for me and one for my cousin because my parents would only let me go if he came with me. So about 100$ poorer I showed up at the Metropolis at 2:00. There was already a line and my cousin was meeting a bunch of his friends there.

We went shopping and returned at 7:30. Then one of the girls my cousin knew was like super happy. She had pulled out some of Daniel's hair when he came out of the bus. The show started way late but when Handsome finally came on it was great. They weren't as good as I had expected and I didn't get into the mosh pit yet.

The first floor of the place really smelled like pot. It was so crowded. Then after Handsome's set it took a while for Local H to come on. They were a lot better than Handsome and you couldn't help but go into the mosh pit which really wasn't so rowdy. That guy that was mentioned in the other review of this show, the one who was dropped on his neck, was actually a girl that I was with. She was all right after the people who were on her got off her. She went out for a while but came back in time to see silverchair.

Again it took a while before silverchair came on after Local H's set. In between this guy came out on stage and played something on his guitar then threw some stickers or something into the crowd, silverchair then appeared on the stage and the place went wild. The mosh pit got worse and after a while a girl got carried out of it by some guys. She was unconsious and everyone thought she was dead.

The show went on anyway and I just had to go back into the mosh pit. I got pushed to the front right in front of Chris and a bunch of bras were being pitched onto the stage. Then I got pushed back into the pit. He picked something off the stage and just dropped it in the crowd. I'm not sure if it was a bra or something else. During Israel's Son Daniel started saying put your fucking hands in the fucking air until the people on all the three floors had put their hands in the air.

When he got what he wanted they just ended the song. The last song that they played was one with some people from Handsome and Local H. I don't know which song it was but it wasn't a silverchair song. Well I had a great time although I've never been so hot before in my life and it was the first real concert (a band that is known by more than just the people in my town) and I just loved it.