The last time I saw silverchair play St. Andrews it was the first time that I had seen them play. It was one of the most powerful shows I have ever been to. I wondered if they could top it and they did. The band was in top form. 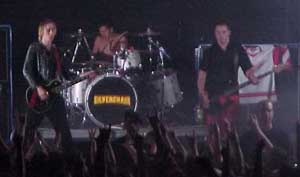 Although it was absent from the set list on this particular evening, the band played a killer instrumental version of Spawn Again during the soundcheck. The band also played Emotion Sickness, Paint Pastel Princess and jammed to some punk songs during their warm up.

Lit hit the stage and received a good response throughout their set. They are really nice guys and put on a good show. I was impressed with them on this night and wish them the best of luck.

The 'chair hit the stage and took over. Israel's Son sounded good and heavy and it led directly into Emotion Sickness. One of the things that I was most impressed with on this evening was the sound in the venue. St. Andrews has superior sound and it was perfect throughout the night and the lights were fantastic. My friend Nabeel who wasn't even a fan of the band before their latest album was very impressed with the lighting and sound so I took that as a good sign since it can be hard for a band to convert fans. 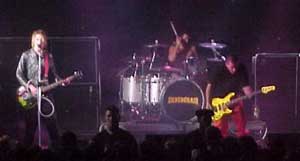 The band was in top form and Daniel was very funny. The set list was the same as the other shows besides the absence of Satin Sheets and Pure Massacre and the addition of Faultline and The Closing. Daniel made references to Cub Scouts and countless other jokes during their set. Some were undecipherable but others had everyone laughing.

The band closed the set with Anthem for the Year 2000. They returned minutes later to close up with The Closing, which sounded VERY good, and No Association. Throughout the second half of the set fans were jumping from the balcony onto the stage which caused a security nightmare but it was eventually taken care of. Chris taped a Detroit Red Wings jersey to his amps which was cool. Someone gave each member of the band a jersey.

After the show everyone headed out satisfied. The guys stuck around inside for a bit and then headed to the bus where Ben videotaped a crowd outside their bus. silverchair is in top form. I was really impressed with their performance and hope that they continue making music that makes so many people happy. Your doing a great job guys and we all hope that you keep making great music well into the YEAR 2000!!!

Well my cousin Grace and I got to St. Andrew's at about 4:30 and totally froze our asses off until like 6:15 when the doors opened. We stood around for awhile as this REALLY annoying music played and waited for the show to begin... the show was sold out so it was packed. 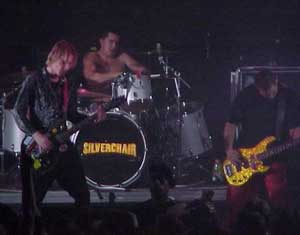 Lit came on at 7pm and rocked the house! They kicked some serious ass and their guitarist was very active and a sweetheart. After they got done blowing us away some techno and gangsta rap was playing. It sounds odd but it was actually pretty cool... then silverchair came on and the mosh was hell (think of doing taboo/high impact aerobics for a week straight!) I met a guy who puked, another who passed out and one whose shirt was covered in blood, and it wasn't his!

I cannot remember the set list verbatim but I can assure you that I was moved and it rocked... it was very cool just standing their with my eyes closed for even just a millisecond and just let the experience wash over me.

After the show a bunch of us stood around and froze our butts off waiting to meet the guys... I feel I should explain something now... I didn't just want to meet the guys, I wanted to give Ben a joke gift that I figured he'd get a kick out of... a bra that I decorated just for him! Sounds stupid i know but I've seen pics of him in bras and there is this quote in which he mentions that he needed a bigger bra size or something.,so I complied... 'Twas a joke (I'm a lesbian, not a teenie)! 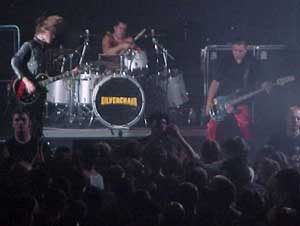 After about an hour they finally came out but we had to stand behind a barrier and we couldn't get close to them. I was a little frustrated but then I noticed a group of girl spazzing at the bus door... I walked over and there was Ben videotaping them! I showed him the bra and told him it was for him! He was a little surprised and I was still deaf from the concert by this point and he said something to me but I couldn't understand because it was through a glass door so I ended up just telling him the bra was for him again! Then this guy walks by to get on the bus and I asked him to give it Ben, he did and Ben videotaped the bra and me blowing him kisses (acting like a twit for the camera.) I asked him if he liked it and he said he'd keep it forever (I'm holding you to that Gilles!)

So after getting killed in the mosh pit I made up for it for making an ass out of myself in front of Ben! It was great and I totally think if you can go to a 'chair show do it! It ruled and my hearing or my body will never be the same...

All I have to say is that was the best night of my life. After a 60-minute drive to Detroit we arrived at St. Andrew's Hall. We didn't have to wait in line very long which was great because all I had on was my old Frogstomp shirt and it was cold.

Lit was okay...nothing to make a fuss over. I guess a lot of people liked them though, lots of moshing and silly things like that going on. Two teeny-boppers got in a fight during Lit, they must've been 13 years old. It was kind of pathetic. They played for what seemed like a lifetime but was only about 30 minutes long.

silverchair were just amazing. I had the time of my life, and it was my first time seeing them after loving them for nearly four years. They played the usual songs in the order they go. Except to my surprise they played 'Pop Song for us Rejects' rather than 'Pure massacre' which was fine by me. And instead of 'Satin Sheets' they played one of my favorites... 'The closing.' I was extremely happy to get one of the 40 autographed copies of Neon Ballroom. I also got the very last shirt too...

Daniel talked about Detroit a lot. He was saying "Detroit! #1 rock 'n roll, we love Detroit" things like that. He also quoted a lyric from 'Dearest helpless' He said something like "Sex, drugs, image and rock 'n roll is all you need." he didn't command us to jump as much as he has before, so I guess we did a pretty good job jumping around. Right before 'Paint Pastell Princess' he said something like if we're here to hear the old songs then go away because this was not the time for an older song. That's about it...of course we did the Y-shaped clap thing during 'Anthem...' which was really cool. What an unforgettable night!