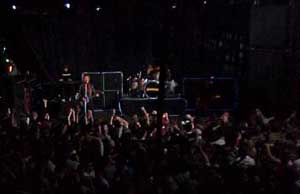 Having been to a 'chair concert before, I knew that the show would completely rock, but tonight completely blew me away! It was a six-hour drive from my house in Lexington, Kentucky to Cleveland, but it was definitely worth it!

Lit was the opening act. I didn't really care for them. Before their set was over the lead singer announced that Daniel was backstage naked. That really made the teenies shriek, and got the crowd pumped for silverchair's performance.

At 9 o'clock the 'chair came on and burst into Israel's Son. Next they played Emotion Sickness, which was completely amazing.

The band was at their best tonight and Daniel was quite chatty with the audience. He told us that Cleveland was his favorite place to play in the U.S., and that although he said that in every town he really meant it tonight. He announced that he was not going to say a certain phrase that every band says when they play in Cleveland because it's not funny any more.

So, he told us that tonight we were going to be known as Brazil because it had that tropical kind of thing going on. He then changed it to Australia. He said he was glad to be home and the 'chair definitely played like they were. He then told us that he loved us and wanted to have sex with every person there. "All the males tonight and all the females tomorrow," he said. I'm sure that annoyed the teenies. 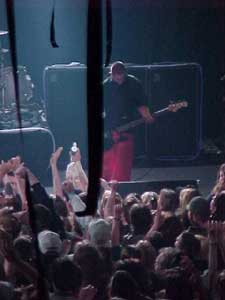 When silverchair played they COMPLETELY rocked!!! silverchair's set included a quieter first half where they played new songs such as Ana's Song, Miss You Love, Paint Pastel Princess, and Emotion Sickness, as well as Abuse Me, Suicidal Dream, and Dan's solo version of Tomorrow.

After the "quiet" section, Daniel announced that they weren't here to play Tomorrow, they were here to ROCK, and rock they did! They started out with The Door and Daniel commanded everyone to "jump!"

The crowd was extremely rowdy! I'm surprised that I made it out without any injuries. At one point this guy from the crowd jumped up on stage and ran around and then dove into the crowd. Reverend Daniel managed to get a couple of enthusiastic "hallelujahs" out of the crowd during this half of the show. They ended with Anthem For The Year 2000. While the beginning was playing, Dan made a gun with his hands and fired some ammunition (spit) all over the stage, and then got the crowd to chant "we are the youth" for what seemed like 10 minutes, but it was awesome!

After Anthem, they left the stage. When they came back they played The Closing, which they hadn't played in a while but Daniel said they would play it for us because we were Australia and we rocked. They also played No Association, which is always REALLY good live.

The 'chair were really into this show and played hard. Ben assaulted his drums while Chris rocked out on bass. Sam's keyboards added to their show also. Daniel's performance also blew the crowd away. He talked to himself a lot tonight. He mouthed things like "I can do it" and a lot of obscenities which I suppose were directed toward himself. He did a lot of cool hand/arm movements too. silverchair's new songs were very moving and were played very passionately. Their old stuff rocked too, especially Freak. Daniel got the crowd to sing "body and soul, I'm a freak" back to him with the emphasis on the K in freak. This was definitely THE BEST show I have ever been to. 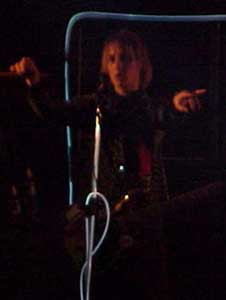 The mere mention of the name brings back an entire phase of my life.

But that night, all previous conceptions and admiration of this teen-rock group was left behind. Before the show, I spent time reviewing my 11 silverchair CDs and refreshing my memory.

Neon Ballroom had come into my hands just the day before and had already given me a taste of the splendid time I would enjoy that following evening.

The show opened with Lit, an incredibly unoriginal band. Throughout the show, I couldn't help but notice that the melodic vocals completely clashed with the bad punk/cheap hardcore guitar riffs. The singer did all but actually play a guitar, he had a fetish of constantly strumming the air which ruined his stage appearance. None of the members could claim to be accomplished musicians in any way, but they will have their 15 minutes of fame because of their catchy radio-friendly style.

But that's not the reason I was there.

A short time after Lit, silverchair rocked the stage in style with the opening bass of Israel's Son. They continued in a string of well-chosen songs with (in a rough order) Emotion Sickness, Slave, Abuse Me, Suicidal Dream and Tomorrow. All of these great tunes were improved tenfold by the awesome stage presence of the band as well as Daniel's brilliant vocal work.

They continued with such songs as Ana's Song(Open Fire) , Faultline, Madman, Anthem for the Year 2000, Miss You Love, Freak, Paint Pastel Princess and The Door. After the screams, they did their encore of The Closing and No Association. The mosh pit was intense, but the spirit was dampened by the over-population of 12-year olds.

With such a new and mature sound, silverchair should start drawing a larger audience of older people as well, and they have matured greatly. This album and concert certainly instilled in me a hope for a very promising future from this band. 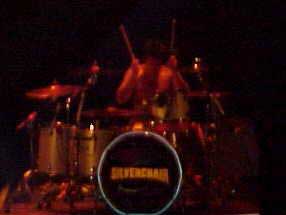 I got there about quarter to 8, and time within itself was passing. Things started off a little slow and no one bothered to even jump for the opening band Lit. We were all there to see silverchair and that no one could stand to wait for. We rooted Lit right out of position, considering they only played for about 15 minutes. It took less than usual for silverchair to come on stage... nobody could contain themselves.

The three walked out from the side of the stage and blasted into Israel's Son -- everyone collided into a big untamed frenzy, but I, from the side watched Chris Joannou prowl the stage like a leopard. Thereafter, they broke into some rockin' new songs from Neon Ballroom. Mostly slow ballads, but desired by the crowd. I burnt my finger into a blood blister when I set my hand on fire during Ana'a Song and then again onto Tomorrow. Daniel Johns began to speak: "We aren't here to play Tomorrow," he flaunted. "We are here to play tonight!"

Unaware what that meant, the crowd still cheered in excitement. Just to hear your favorite band play is enough to get you the closest to a natural adrenalin rush -- excluding the weed that was smoked beforehand. They played a couple of songs off Freak Show, surprisingly Faultline, and then an encore with The Closing and No Association. Words cannot describe what sensation is brought off when those heart-pumping bass lines are dropped!

P.S.: Kudos to the new keyboardist, Sam Holloway -- he rocked!