Modern Rock Circus (Day One)
Plaza of Nations
By KEVIN TEMPLETON of 107.7 The End
Photo by Rodney Gitzel/Drop-D Magazine 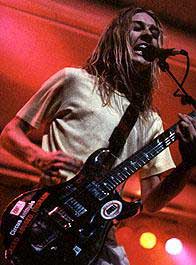 I bid you welcome to life outside at the electric circus: day one of C-FOX's two-day "modern" rock-o-rama at the old Expo '86 amphitheatre. As you might've expected, thousands of young 'uns took in the festivities and were generally well-behaved and enthusiastic (my ears are still ringing from the screaming), aside from the usual moshpit bullying and pot-smoking indulgences. But anyway...

And last, but not least, we had silverchair, the young Australian trio of gentlemen prone to sounding more like Seattle than Sydney. Daniel Johns is the centre of attention with his Kurt Cobain-meets-Jerry Cantrell profile, providing grand entertainment for his adulating army of fans, many of whom are young, female and screaming constantly.

Sure, everything surrounding Ben, Chris and Daniel reeks of teen spirit, and, sure, they wear their influences like KISS wear makeup, but can these guys ever play! Ouch! Slave (Mad Season), Freak (Helmet) and Israel's Son (Soundgarden) had the audience going relatively apeshit throughout, with Johns setting a fine example with some tremendous hair-tossing and spitting-in-the-air antics. What a surprise: silverchair were easily the best of the lot at this show. 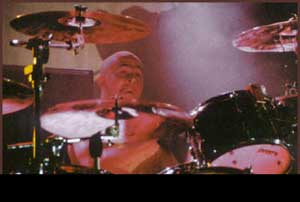 On April 11th at the Plaza of Nations in Vancouver, B.C., Canada, silverchair was the feature band for the David Hawkes' Triple X Modern Rock Circus, which also featured other bands such as Local H, Age of Electric, Handsome and Mollie's Revenge.

silverchair arrived at the Plaza of Nations around 6:30 p.m. 'chair fans were so eager to get a glimpse of the three when they were inside a broadcast trailer for an interview that they broke the satellite dish!

In my opinion, Ben looks much better bald than with his long hair because you can see more of his face now. Daniel looks the same as always, and I saw Chris wearing gold-rimmed glasses. Security was pretty tight when the band was ushered out of the trailer into a mini-van to the backstage area. Fans were crowding about the van, even when it was going at a snail's pace.

One fanatical girl was trying to hand the band (specifically Daniel, I think) a letter of some sort, but to no avail. She sounded like she really needed some psychiatric help, if you ask me. She was just a mental wreck! Luckily, no one got bulldozed into the pavement. 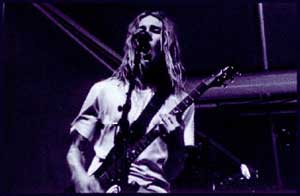 The concert started at about 10 p.m. and lasted for about an hour. Here is a list of the songs, in the approximate order they were played: Slave, Roses, Findaway, Abuse Me, Pure Massacre, Faultline, Cemetery, Suicidal Dream, No Association, The Door, Freak, Madman, Tomorrow, The Closing, Israel's Son.

All in all, the music just blew me away! Cemetery was played on an electric guitar by Daniel, which gave it a different sound. And in the last repeat of the chorus, he sings not from an E to a D, but from an E to a high E to a D (and back and forth between the E and D), which I think is a beautiful addition to the song.

I was very impressed with the music. But the only band member who ever said anything was Daniel. And everything he said on stage seemed somewhat like a script -- exactly the same as what he's said at previous concerts (according to other reports from the road). Just an observation, not a criticism. I am amazed by the energy of the band, by the musicality, the quality, the showmanship, and their ability to really work well together on and off the stage.

Also, I would like to add that I have now developed a full-blown case of claustrophobia after going into a mosh pit for the first time in my life and escaping out of there barely alive (about five people fell on top of me and I was at the very bottom, and I am only 125 pounds). It felt like the whole sky was caving in on me. Luckily I was not in the mosh pit when silverchair was playing or else I would have been killed. Yes, I am paranoid. I am now convinced that hell is just one big mosh pit of souls all squashed together, forever being pushed and shoved about with no route to escape. 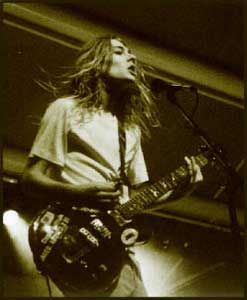 Ben was on the phone for a brief time and a group of girls and guys formed under the window where he was. All I could hear was, "Oh, Ben is on the phone up there!" I was standing beside the stage for the whole show and was able to see Ben, Chris and Daniel at many points throughout the day. I saw Chris the most and Daniel emerged twice that I saw.

Ben smiled at me and waved several times. At one point, he appeared to be coming over to talk with me when a group of boppers came running and scared him off into the other direction. The boppers these days are both male and female -- I swear the guys were sometimes even begging more than the girls to talk to silverchair.

Ben's new haircut looks wicked. I thought it would look odd but it really isn't! He watched Local H from beside the stage and that is the last I saw of him until silverchair came on stage. 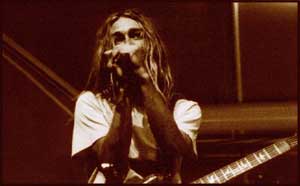 They played Abuse Me, Pure Massacre Cemetery, Suicidal Dream, and Tomorrow before Daniel stopped to say, "Has anyone -- oh, time to pull our pants up (fixing his falling pants). Uh, I was going to say, has anyone ever pulled their dick?" They played The Door and Faultline, and a funky version of another song which I couldn't recognize. Then Daniel said, "Everyone turn to the person next to you and put your tongue in their throat! Fuck, come on, isn't anybody gonna do it? Kiss!" He opens his mouth and puts the whole end of the microphone into his mouth.

Next came No Association, Freak and Madman. They left the stage and returned to play The Closing and Israel's Son. When the song ended Dan put his guitar down, Ben chucked his drum sticks, and Chris just put his bass down. Daniel then climbed the amps and flopped over them! It ROCKED! 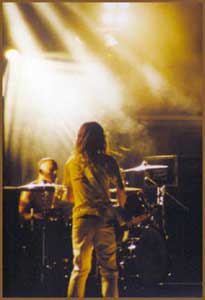 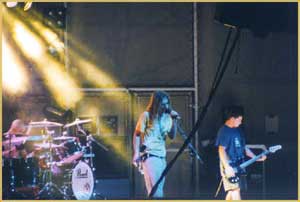 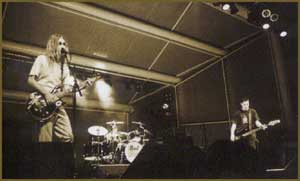 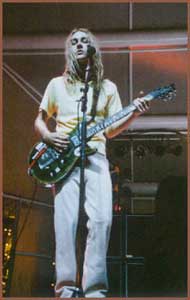