Photos by BOBBY GILL and CHAIRPAGE

silverchair's first visit to Philadelphia in nearly two years drew a capacity crowd to the Trocadero in Center City. It was a chilly Friday night and a late starting show (silverchair were not due on stage until 10:15 p.m.) meant a long wait along Arch Street for fans who'd queued up to get inside.

As if the cold streets of Philadelphia weren't enough, the Troc's sprinkler system decided to open up on the crowd as they waited for opening band Lit to begin. Sound engineer Alex Guessard and lighting technician Hugh Taranto scrambled to protect their precious equipment from the spray. Window fans were brought out to dry the sound and light mixers, and there were no malfunctions during the show. 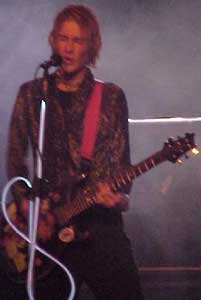 Lit's energetic set was highlighted by their hit single My Own Worst Enemy. Lead vocalist A.J. Popoff thanked silverchair for bringing them along on the tour. (Lit and the 'chair hooked up for the first time two nights earlier, and will tour together through the March 23 show in Boston.

silverchair kicked off their set with Israel's Son, followed quickly by Emotion Sickness, the lead track from the band's latest album, Neon Ballroom. The new song was well received by the crowd, considering that the release of the album was still several days away.

"Hi, we're silverchair from Newcastle, New South Wales, Australia," singer-guitarist Daniel Johns told the crowd, most of whom probably pretty much knew that. Next on the set list were Abuse Me and Slave from the band's 1997 album Freak Show.

Slave was so enthusiastically performed that a mishap occurred to drummer Ben Gillies.

"Ben's broken a drum," Johns said after the song. "It's all right, that happens when you rock." 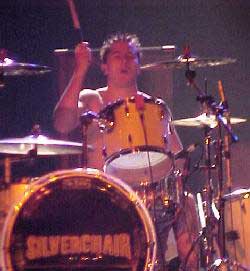 "This is a new song and it's for ... that guy up there," Johns said, pointing to a surprised young fan in the balcony, as he introduced Ana's Song from Neon Ballroom.

After the the intriguing love/hate song Miss You Love from Neon Ballroom, Johns announced that the "slow songs" were done and that it was now the "time to rock." He exhorted the crowd to jump to The Door, and they did, continuing to do so through Pure Massacre, Freak and the first single from the new album, Anthem For The Year 2000. The audience provided backing vocals for the new song, thanks to extensive airplay on local radio stations Y-100 and WYSP.

After a short break, silverchair returned to the stage and assaulted the crowd with the powerful Satin Sheets. Johns also assaulted his Gibson SG guitar, popping a string just seconds into the song.

Capping the night was a spot-on rendition of No Association from Freak Show, and then it was back to the streets of Philadelphia for the crowd and a long bus ride to Chicago for silverchair as their March march across North America moves to destination number four. 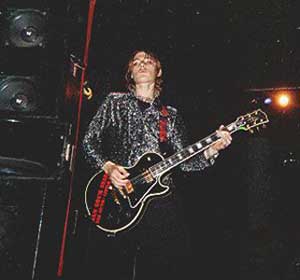 EXCESS ACCESS: Before the show, Daniel Johns told chairpage why Spawn Again hasn't appeared in the band's set list in the early days of the March 1999 tour. He said the song is so taxing on his voice, it takes several days for his throat to fully recover. Bassist Chris Joannou called it "the shredder," referring to the way it affects Johns' vocal cords... Three songs from silverchair's soundcheck in Philadlephia were recorded for a "Sonic Session" to be aired two days later on local radio station Y-100. A handful of lucky fans who won tickets to the taping were present. 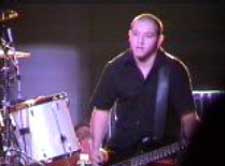